It was a night or morning filled with dreams, stupid ones. Crazy where some of them come from. I woke and rose at 6:50 and as soon as I was dressed and had the Keurig prepped, I went out the door for my walk. It is already starting to be lighter out earlier, just that 15 minutes makes a difference. The temperature was only reading 48F/8C but I was still toasty with my vest, gloves and neck buff.

I walked out of the park and onto the paved road. It took me to the Chevron fuel/variety station where I turned around and walked back. Along the side of the road I saw a HUGE caterpillar. I’ve never seen one so big! 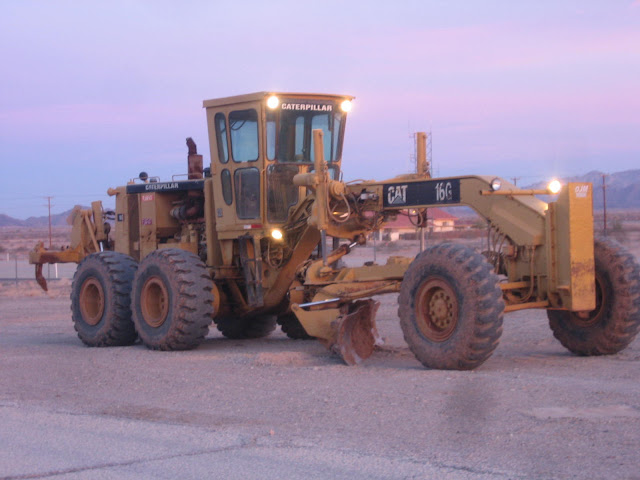 Well, really, I have, just foolin’ with the play on words. I spotted Loree and Freddy in the desert so was happy that I left a rock for her on her step. She had shown an interest in helping us find nice stones to paint. Now she has one.

Back at the Suite 45 minutes later, I had tea with Bill and read some blogger friend’s posts from yesterday. Everybody has had a wonderful Christmas in one form or another and that makes me happy. We all have different lifestyles and when we can continue to fulfill our daily dreams in small ways, then we are living our life to the brim. Today, I can at least say, although cooler, the wind has dropped considerably from the last few days.

At 8:30, I cut us each a piece of my Banana Date Nut Loaf with butter and that would suffice as breakfast today. Then we each had a shower and got dressed to play Bocce Ball at 9:30. There were 13 players today so Gordon had his hands full keeping everyone straight, making sure the teams were shuffled and that all players got a few games in. It was not my day, that is for sure, I lost every game and felt sorry for my partners, I still had a lot of fun.

I’m never disappointed with the company we all keep and seem to pick up a new phrase or word from our Kentucky friends, Judy and Eddie. Today it was ‘it’s a bit airey, ain’t it?’ Yesterday, ‘why is this game taking so long, is it waiting for Jesus?’ She is a hoot and a very sweet lady. She informed us yesterday (in her very strong southern accent) ‘we are all from the South’. My only response could be ‘Really?’ Love that gal’s demeanor.

I think we played 5 games, or was it 4? and walked back together, Rob, Pat, George, Suzie, Ron rode his bike, Bill and I. Maybe next time we’ll get Loree up there too. It was 11:30 when we called it quits and helped Gordon put the balls, tables and chairs away. Barb and Gordon are the social ‘calendars’ and are continuing to remind everyone of the goings on in the park, encouraging joiners. I do believe they are tickled that we are a group of 8 who are participating weekly. It will get busier in January when more newcomers arrive.

I made a coffee when we got back to the Suite, since we had an hour and Bill stretched out in his recliner. At 12:30 the 4 of us loaded into Black Beauty and Bill drove into Yuma. George took his car and Ron took his truck. Some of us have shopping to do after lunch. You can’t beat the price at Lin’s for lunch (until 4) as it is only $9.00 pp. After that, I believe it is only $14.99 pp. There is so much food offered, as at any buffet, and they are constantly refilling.

Each time I go, I get smarter for my own sake. The first plate doesn’t get loaded to the gills, nor does the second and that leaves me a little more leeway for the dessert plate.

The waiter for your table is pleasant and always handy to remove a plate as you empty it but not annoyingly so. I enjoyed it today better than other times and it was nice to be with our friends, Ron, Loree, Jean, Skip, Pat, Rob, Suzie and George. We do this once a season.

When we parted ways at the restaurant, us four went to Fry’s for a few groceries before heading back to camp.

Bill sat with Clemson and I texted Pat about going up to work on the puzzle. The day was cooler so I slipped out of my skirt into capris and we walked up together. Each time we work on it, the improvements are significant although it seems like we aren’t getting anywhere. Pat walked back to watch a program at 5 and I followed 20 minutes later.


There was no need for a real supper tonight. I felt tired and found myself in my chair as well. Bill found a movie at 6 called The Horses of McBride, a true story, so we enjoyed that together. He says I’ve seen it before but I don’t remember anything about it. One of us is mistaken! Ha ha.  It was a good movie to watch on an early evening. Around 7 we had some Christmas cake and/or banana bread with hot chocolate. That filled the desire for a snack.

This was another great day and a good meal. I hope you had a great one as well!
Thank you for stopping in.

Posted by Patsy Irene (Chillin' with Patsy) at 7:14 AM