After Clemson was up a couple of times through the night, we slept in Thursday, Dec. 6th. I didn’t get up until 7:05. Clemson has been so good but it is still unfortunate that Bill has to physically get dressed and take him out in the wee hours. I only get awakened so drop back off easily. I had my tea and texted Rob about our walk being postponed. He readily agreed so I let Bill sleep on until 8:15.

When he came down, looking at the cloudy day, he started the generator after making his coffee. It is a warmer morning at 52F and less wind at 6 mph so an okay day to move locations. We are just going into the city a few miles and taking George and Rose up on their invite to camp there for 5 nights. Such generous people.

I finished my tea, put a few more things away and started frying bacon. Once Bill was done everything except taking down his wind vane, I put the eggs on. We didn’t move quickly but steady and by 10 or so, we were ready to leave the boondocking behind for a few weeks. We pulled out first with Rob behind and soon enough we were turning onto Kibbey Drive. Rob needed to dump tanks before parking so he backed in first with help from Bill and George. 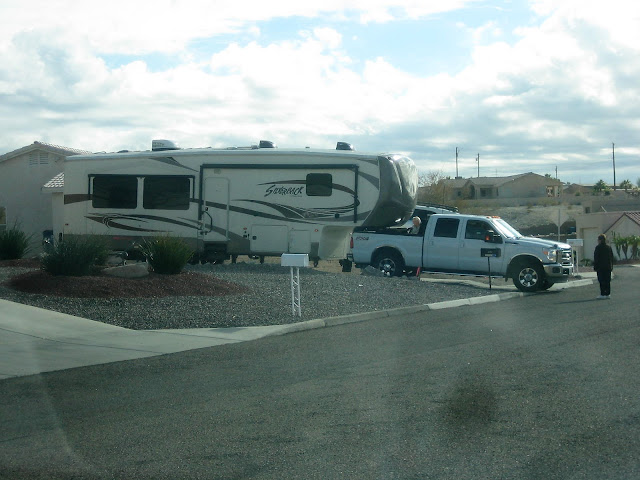 Then it was our turn and Rob and George helped get the Suite in by giving Bill directions. Easy peasey. With the trucks unhooked, rv’s dumped, and satellite dishes and weather stations set up, we all joined George and Rose for a coffee/tea on their back deck. What wonderful hosts we have and they encouraged us to make ourselves at home. We have water, electricity, sewer to dump when needed and even a hot tub at our disposal! We can use their barbecue as well so we are very very comfortable.

The clouds rolled in though after a while and the temperature cooled off enough for us to slip into our jackets. There was a threat of rain but Rose says it doesn’t usually amount to anything. After a bit of a lesson on ‘rock hunting’ we all retreated inside our homes for a bite to eat. We would be using our air fryer tonight so didn’t want to eat too much. It is so nice to be plugged into power again. I think we are getting spoiled and loving every minute of it.

Bill remembered that today was Thursday and last year there was a Classic car show on Thursday nights, running down the main street of McCullough. We confirmed with Rose that it was still on and so the 2 guys went to check it out around 3:30. Unfortunately, maybe due to the overcast skies and rain threats, there were only 4 cars on the strip. While they were gone, I had a couple of shows to watch on our PVR of This is Us, including the finale, so watched those.


After Bill returned, we were invited in to Rose and George’s for Happy Hour and took a vodka cooler each to join the happy gang. It was a fun hour and a half talking about everything and anything. George showed us some of his coin collection and various other things he has picked up at auction sales. What an interesting guy he is, with many interests of his own and the pride to share them with his friends.

We came home around 6 and I cut a couple of potatoes up for fries in the air fryer. I pulled some chicken nuggets out of the freezer to try in there as well. The nuggets were Bill’s suggestion so I hope he likes them. Bill set the table and we relaxed, waiting for supper to cook. I did the fries first and they were done in 20 minutes and then I did the nuggets for about 8 minutes total. Yum! They smelled great and tasted even better with sweet and sour sauce for dipping.


We cleaned up dishes and relaxed for the remainder of the night. Rob and George took a dip in the hot tub with Bill declining this time. Another time, I’m sure he’ll take advantage of that soothing tub and so will I. This has been a nice day. We are experiencing a calmer day and we’re working on some plans for the time we’ll be in Lake Havasu City. Stay tuned to see what we get up to!

Thank you for popping in today. It is always a treat to hear from you.