This morning, Tuesday, Dec. 18th we were awakened at 5:40 am with Clemson needing to go out. That’s better than the previous 3 or 4 nights at least. Bill dropped back off to sleep eventually but I rolled and tossed and finally got up at 6:45. I do believe this will be a quiet day, at least nothing planned yet.

It was reading 49F/8C on our station so I put my gloves on and windbreaker (even though it was calm). I’m sure it looked funny bundled up like that in capris and runners. When I got back home after 30 minutes, Bill was up and so was Clem. He made our hot drinks, Bill did not Clem, and I took the little bum, Clem not Bill, out for his business. I promised him that we would take him for more walks, short ones during the daytime.

At 9 I fried up some bacon and eggs for breakfast to get that out of the way and it should tie us over for most of the day. Sometimes a cheese snack is all we need mid afternoon. New hairdo, new glasses, it would be nice to drop a few tummy pounds too. Yah right. After dishes, Bill hopped in the shower and I took the garbage to the dumpsters at the front of the park. I stopped to snap a picture of Rob playing Corn Hole with 3 others.

On the way back, I stopped at the puzzle room and texted Pat as to my location. It was a few minutes later that she joined me and got right into placing pieces. She’s becoming a pro now! It was at least an hour before we headed back around 11:45. As I got close to our site, I noticed a very sweet surprise. Bill had responded to my early morning request of getting my bike out of the back of the truck. It needed attention (air in the tires and oiled chain) and I was tickled to see both of them sitting together, in prime shape.

We sat together with our books until Bill couldn’t keep his eyes open anymore and moved inside. That was my cue and I changed into my bathing suit and once more texted Pat that I was heading up to the pool around 1:15. It was time to take Clemson for a walk so he was happy to go around the campground block. I ate a yogourt cup and Pat and I met out front of the Suite and walked up together. No one was there again, we had it all to ourselves. The pool water could be a tad warmer but once we were in, it was so refreshing.

We swam and I floated on my pool noodle for 15 or 20 minutes at least before running quickly to the hot tub. The outside air was cool even though the temperature today reached 74F and the sun was very hot. Another couple joined us in the tub and eventually I took one more dip in the pool, swimming the length and then stretched out on the lounger.

I was close enough to hear the conversation in the tub and they were making me hungry talking about the offerings at the Christmas dinner!

When Pat took a final swim and float in the pool, I caught a picture of her. These are the things I did too so it is my way of telling the story. 😊  Pat isn’t a sun-sitter so when she got out at 2:30, she left me to my desires and walked back. At 10 to 3 I also left the pool area but with a dry bathing suit. I walked back and made Bill and I a tea with cream. We sat outside in the sun together with our books. I hopped on my bike for a quick spin - they say you never forget, and I didn't. Yay! I love my bike!

The wind was gusting every so often around 11 mph and it cooled down quickly.
Bill went in and I moved around to sit under the nose of the Suite. I wasn’t completely out of the wind but the bonus was my view of the hummingbird feeder.

With the sun behind the hummers, they were quite thirsty and entertaining! The sun moved below the clouds but it was almost 5 and time to get supper started. We wanted to have supper and dishes done to watch the final 3 hours of The Voice.

Bill grilled our burgers and because I’m on a kick again about eating too many carbs, I had mine on the plate with just bacon, cheese and the fixings. I made us each a Caesar salad and the burgers tasted great. We had dishes done in good time and turned tv on for 6 pm. 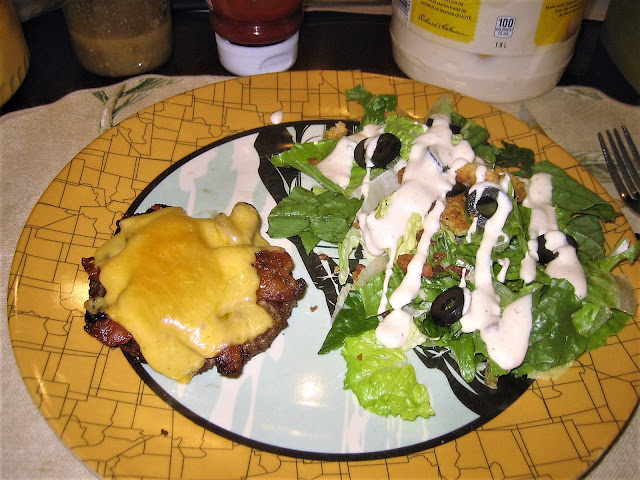 I slipped out, ran across to the fence and captured the following pictures of the sky to the west. The best I could do tonight of the sunset but when I turned around, I positioned the next photo perfectly. Bill’s flags pointing to the moon. 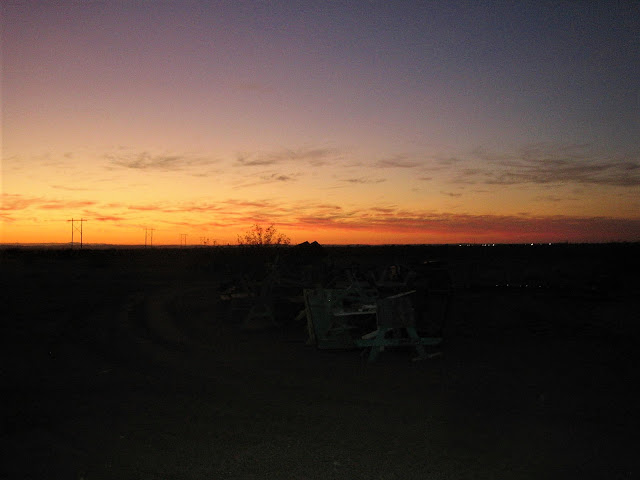 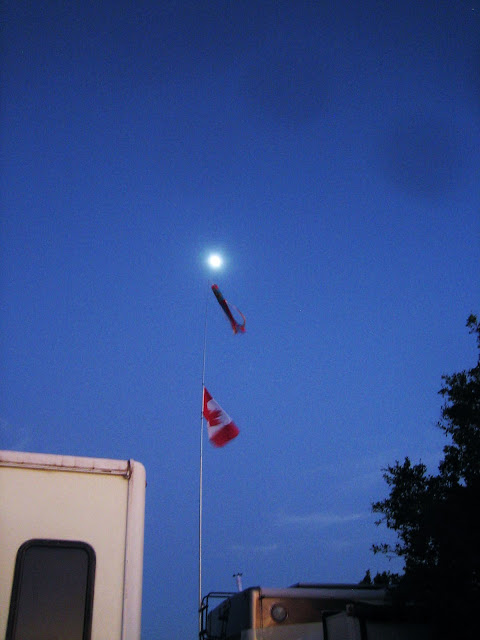 It was a wonderful day here in our paradise. Thank you for your visit!

Posted by Patsy Irene (Chillin' with Patsy) at 7:59 PM