The Morning After, Shuffleboard, Tripping to Town

I woke up on Wednesday, Dec. 26th aka Boxing Day at 5 am and as I turned over noticed my nose was starting to bleed. Hmm, could be the dryness but it stopped almost immediately. I dropped off again until 6:15 and then once more until 10 to 7. Okay, now it is definitely time to get up! I have a blog post to finish. I did that and then slipped on my hoody, wind breaker and my new puffy vest. Santa did me proud this year!

It was 50F/8C so a tad cool but this was the perfect combination for this morning’s walk. I don’t know how many miles I went, I’ve pretty much been meeting my personal quota most days with the exception of Christmas. I walked the park and then out to the open desert to meet the sunrise at the lower mountain. It is so pretty when it pops for the first time and if you blink, you miss it. Then I found 2 or 3 more baby stones and turned around for home.

I stopped and picked another orange when I walked by to get a picture of the 5 train engines across the road. Thinking of Dad with fond memories each time the whistle blows, when I’m awake to hear it. 😊 We heard Dad’s voice on Marilynne’s answering machine yesterday and that was almost a show stopper, let me tell you. We understand why she would keep it on her phone, we just weren’t expecting it. We do miss him.

Bill had some toast and jam at 9 and I had some yogourt with a very soft banana, granola and wheat germ. Just enough to take us through until lunch time.

We headed up to the pool area with Rob and Pat for our weekly (we’re pros now!) shuffleboard game. Ron joined us on his bike and George and Suzie came today as well. There were 11 of us up there today including a score keeper and 2 spare players.

Bill and I were partners and started off really well, winning our first game against Rob and Ron by a nice margin. We lost the second against Judy and Eddie (close game) and lost the third to George and Suzie with a ridiculous score. It is a fun game for sure and I enjoy being outdoors in the fresh air. Soon enough, my hoody and wind breaker came off because of the warm sun. The winds are back today again but gusts not quite as strong as yesterday’s – but close.

On the way back, Pat invited us to go along to Yuma, they had a couple of errands to run so we topped up our morning nourishment with a yogourt and hopped aboard. It worked out well because we were soon needing an ink tank for our printer. These things are pricey and never ‘on sale’ so you just bite the bullet and buy them when you need them. From there we walked down to Harbor Freight and we found some instant glue. I had a pair of shoes needing the insole reglued.

Before coming home, Rob and Bill found some wood pieces that Rob needed to repair chairs in their Silverback. Our units are not unlike a sticks and bricks home, you are always fixing something. Back home just before 1pm Bill had a light lunch and I had a bowl of chicken soup with a coffee. Filling and enough until supper time. I’ve taken farmer’s sausage out of the freezer.

I had 4 bananas with very dark skins so had promised Bill that I’d make some banana date nut bread. Today was the day. I mixed the ingredients together and poured it into the greased loaf pan. Once it was in the oven, I texted Pat to walk up with me to the garbage and maybe work on the puzzle for a while. It was 2:15 and I knew we had an hour before the bread would be baked.

We chatted away like longtime buddies while putting pieces in and Pat chose a puzzle to bring along with us on the rest of our journey. We’re hoping to be able to work on one while in Yuma for our month stay. We’re going to try at least! The next time we looked at the time, it was 4 pm so we walked back to see if there was a decision about Happy Hour. Back home I noticed that my banana bread was done to perfection and smelled delicious.

Rob and Bill were busy working on organizing their ‘tackle boxes’. This was a Santa gift for each of them, something to hold the nuts, bolts, screws and whatnots for travel. We decided to scrunch in front of George and Suzie’s coach for a drink with everyone since he was keeping an eye on their ribs on the Weber. The cool air got to me and even after moving my chair for some relief from the wind, I knew I should have taken a hot tea rather than a margarita.

At 5 I was chilled to the bone and needed to come home. The temperature wasn't terrible, at a nice 66F but the wind speed was coming directly at us from the NNW at 15 mph. Brr, it felt chilly and I was grateful for the warmth the Suite offered me after sunset. For supper, Bill grilled up a couple of farmer’s sausages. I had a fair bit of spaghetti squash in the fridge so cooked some with butter, cheese, salt and pepper along with a portion of Caesar salad for each of us. 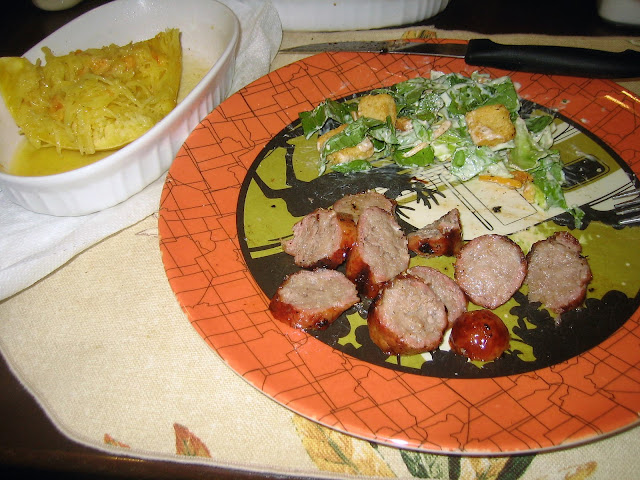 We enjoyed dinner and after dishes, we sat watching some tv and doing some reading. I’m too distracted to get into a book these days but I continue to try. Bill sat with Clemson and gave him a quick brush, well he tried to give him a brushing.

That didn’t go over too well, but just as expected. Rob came to the door to borrow some milk at just the right time. Clemson ran to him for a rescue.

Boxing Day was another good one and there was only one box involved and Bill will enjoy filling it in the days to come. I’m hoping you had a relaxing day.

Thank you for the visit, I hope you enjoyed it.