Home on the Ridge
Bill was up at 5:30 and I followed at 6:45 or so on Thursday, June 13th. We both had to go to work today. My shift is much shorter than his but I wanted to get an early start all the same. As I moved to do my stretches and to get up, Clemson also took that opportunity to get up. I would have had to wake him anyway before I left. He was warm sleeping on top of the covers all night, not coming under with us once. These nights for sleeping are perfect in the mid 50’s.

The surrounding area is heavily covered in gray clouds, like the paint I used yesterday, and light rain was falling. I don’t know when it started but it doesn’t matter. Things were wet and that included my garden would get well watered today, naturally. The best way. Clemson went back up to bed and Bill finished his morning ritual before kissing me goodbye at 6:05. I brought the awning in, only out while Clemson went out and relaxed for 15 minutes before I, too, headed out.

When I arrived, the Mat looked pretty good before I even started but I was concerned that the back door stop was down, probably meaning it has been ajar all night. So much for a lock down. I’m cautious when I arrive each morning because late patrons (before 10:30 closing) can prop a door open at any time. I do a walk around first and make sure I’m alone before starting. 😊

I managed to get everything done in an hour today. The bathroom and machines didn’t need much at all so after sweeping and damp mopping, I was on my way! I debated whether to go to Foodland to price their almond flour but decided to go home first for a cup of tea. The rain isn’t heavy but enough for the sporadic wipers to flip back and forth. At 57F/13C the air feels good after the heat I feel in the Mat. There is a ceiling fan running but until I prop a door open, it just blows hot air. 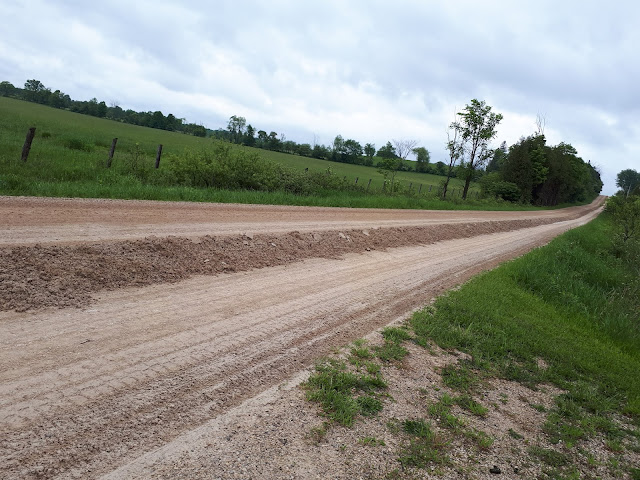 When I turned onto Baptist Church Road, the young gal next door was ready to turn onto the highway at the same time. She drives a newer pale green Volkswagon so easy to recognize. We don’t see our neighbours much but they always wave and she and I exchanged greetings at the corner. Then when I turned onto North Line, I could tell the grader had been down with another load of fresh gravel. Maybe this was why they sprayed first yesterday, hmmm. With a pile of gravel down my side of the road, I drove on the left and Black Beauty made her mark as we crossed into our place.

Two graders went back and forth 4 times as I watched from the shelter of the Suite drinking my tea. I chatted a bit with Donna and planned my day. Inside day for sure, so when I was done my tea, I did all of the floors and then dusted. You know the age-old question of “which came first, the chicken or the egg?” – well here is one I’m curious about. Which do you do first – dust or vacuum? Bill has his reasoning but I have one of my own and I wonder what your routine is.

Once finished those two things, another batch of Keto Custard was on the agenda. I have no more Jell-o to make up until I get into Foodland so this will be a nice change. Instead of leftover roast tonight, I’m thinking I will make myself a pizza with spaghetti squash crust. It’s the only appropriate veggie I have in the fridge right now and it needs to be eaten up.  First though, I am determined to test out my Roll-O-Puzz that was gifted to me by Deb D. last winter.

So, the puzzle mat comes in a tube in a box. Until I read the instructions (always read the instructions!) I didn’t realize that the mat and puzzle roll up over the tube. Interesting but still not a 100% believer. I pulled our table out as far as it would go and got the 550 pc. puzzle out that I’d chosen at Pilot Knob RV Resort. I knew it was okay to take puzzles back to your trailer so this one went just a little bit further. It looked like a fun one to do of bottle caps.

I got right into it sitting in my dining chair, which is straight back and quite comfortable. At one point, I stopped to take a picture and then made my custard. I took Nancy K’s advice and cooked it in Madame IP. 9 minutes instead of 40? Are you kidding me? It’s a no-brainer. I filled and covered the ramekins with tin foil, stacked them on the rack and added 1 cup of water. 15 minutes later, they were done with 6 of those minutes being a natural release. 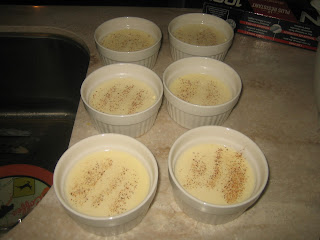 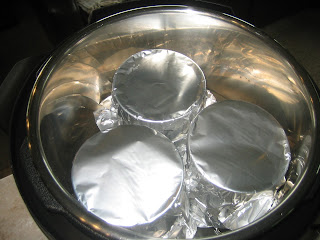 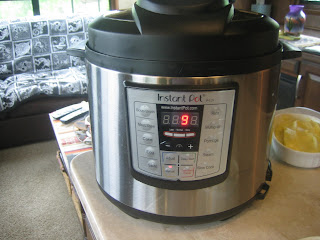 That deserved another break so while they cooled, I continued on the puzzle. I was really enjoying myself with the 70’s tunes playing on Siriusxm. Another break at 3 from the puzzle and I cooked the spaghetti squash that I had in the fridge. While it cooled, I walked down to get the mail. A couple of cards and the rest of our weekly flyers. It was quite mild and just spitting a teensy bit. I knew I wouldn’t melt out there so just enjoyed the fresh air.

When the squash was mixed up and formed into 4 pizza crusts, I completed all but 14 pieces of the puzzle. Now, I would be satisfied if the mat didn’t work, I would have already finished it – so to speak.

I stopped there and made sure the last pieces were laying flat on the mat and then rolled it over the tube. Hmm, seemed to be making sense now. The mat is a felt material. With the two straps that came with it, I sealed it and set it aside on its end. Tomorrow, I’ll open it and see the result. Stay tuned for that! I'm sure you soooo excited!

My ‘dough’ was cooked and yet I wasn’t ready for supper so I read through the mail and caught up on my post. Clemson has been out for ‘whatever’ 3 times in 45 minutes yet hasn’t been pestering for his supper. We can’t figure him out. At 4:30 instead of letting him out for his 4th time (yup, he’s at the door again!) I fed him. He was being pretty good and ate some of the hard stuff already in his dish so I gave him an earlier supper today. It was better than 3 o’clock.

I loaded up my pizza shortly after 5 and popped it in convection oven for 9 or 10 minutes. What I need is a broiler to melt the cheese appropriately, but once I reheated on the pizza setting instead of cooking, it was much better. A pizza needs to be hot and this one was. I’m not sure if it is supposed to taste like pizza toppings on spaghetti squash but that is what I get. Don’t get me wrong, I like it, it’s just not what I expected. The cauliflower crust pizza was better.


I ate 2 of the 4 pieces I’d baked and will have the other 2 tomorrow night. While I was eating, it was around 5:45 when my sweetie called from London. He was done work but putting in extra hours by driving to Turkey Point to set up an rv that had previously been delivered. The weather was not conducive the day it was taken there and it had to be parked by the park staff. Bill was going to help them get it hooked up and explain a few things. It would be a late night for him. Other than instructions to get something to eat, I just said ‘drive careful’ and ‘call when you are back ‘home’’.

With the dishes done, I watched NCIS reruns and worked on a crossword puzzle from the paper. This week’s puzzle is a tough one so I’ll be either be reading my book or finding a program before too long. This has been a pretty good day. Got the things done I’d planned to do and even managed to get our items advertised on Kijiji. Hoping for some nibbles over the next couple of weeks.

As it turned out, I found the movie "The Legend of Bagger Vance" which we really enjoy so I watched it until 9:30. At 10, I couldn't keep my eyes open and with a problem connecting to the internet (again) I texted Bill that I was not able to post my blog and was going up to bed. He texted around 10:30 to tell me he was back safely to his trailer. Good, I can sleep now.

I hope you’ve enjoyed your day. You’ll need an extra blanket tonight, as will Clemson and I. The temperature has already dropped to 53F/12C from the warm 65F/18C earlier today. It is going down to a chilly 44F/7C tonight. Around 8:30, we were feeling chilly so I pulled the blue flame heater out and Bill helped me set it up over the phone. I was pretty sure I knew how to do it but had never done it. Now I have. It just took that chill off and I turned it off when we went to bed and rebooted it at 4:30 when Clem got up for a piddle.

Thank you for stopping in today. I love hearing from you if you feel so inclined to leave a comment.

Posted by Patsy Irene (Chillin' with Patsy) at 6:28 AM