When I went to bed last night at 10, I was not necessarily zonked but it was more out of necessity. I wanted to get up at 6 for work and knew I needed those hours of sleep. Bill remained downstairs until closer to 11:30, so I’m told this morning. So, it was the first time I’ve felt a real void at bedtime. I always have a little buddy to go with me. One who curled up at my back as I faced the window. I felt that I (we) had been very brave yesterday and didn’t get too weepy for the most part.
That changed soon after I crawled under the covers. Enter Sergui. Someone you may have ‘met’ before but I don’t think so. He has been in pictures with Clemson, you couldn’t take him away if Clemmy was on the bed. He’d chase after him and grab his paw to lay his head on his back or nose. 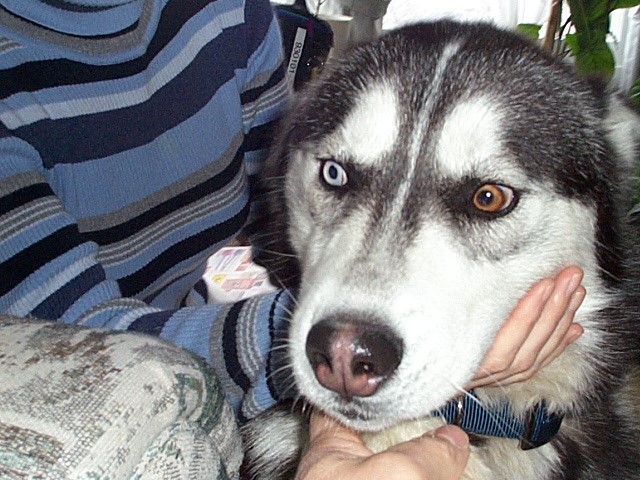 While at the house, we had a husky. Not full grown but not a pup. He was a big beautiful dog in our small house. It didn’t work out for one reason or another and we found him a wonderful home with a custodian friend of ours.

We picked up a stuffed husky from Wintergreen one year, at the School Board warehouse and brought him home. He has sat on our bed there and in every rv since. Last night, after not being able to settle my sobbing, I retrieved Sergui from the floor where he sleeps and placed him against my back. I never heard Bill come to bed so I assume that was the ticket. I am happy to have him to say my ritual “Goodnight, Clemmy, have a good sleep”, and will appreciate that pretense, especially when Bill is in London overnight. 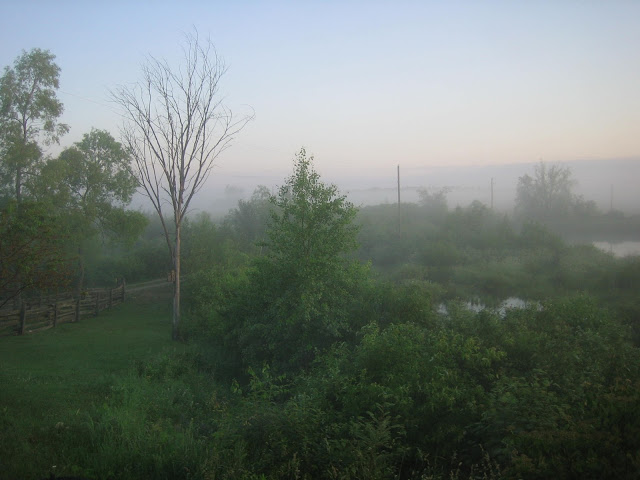 This morning it was foggy and sunny to start but that didn’t last long at all and we prayed the clouds would disappear soon.  I left for work at 6:15, had an uneventful hour other than a pop in visit from Rob on his morning walk. I left there and stopped at Foodland for some groceries needed for Monday and returned home. Once my tea was done, Bill was headed down to the Hangar to put trim pieces up. He is really putting the push on now as it is so close to completion.

My eggs were already boiled and cooled for devilling so I began mixing and stuffing 52 of the little ‘devils’. We held off for our bacon and eggs until just around 11 and then I had my shower while Bill put planes and tools away. He has to move the BIG Telemaster out onto the grass when he works in there so it doesn’t get bumped accidentally. Inside I had finished up in the bathroom when he returned and it was his turn for a shower.

Because of the early morning rising and the 2 hour drive to and from our destination today, we thought it wise to try and have a snooze. No hardship for you know who, but after 15 minutes, I got up and finished making myself presentable. We were ready with the cooler and chairs loaded in Ptooties by 1 and on the road shortly after. Woodstock area was our destination and as we turned onto Zorra-Tavistock Line aka Bridgette and Chris’s road, we realized we were following my sister, Wendy. 😊 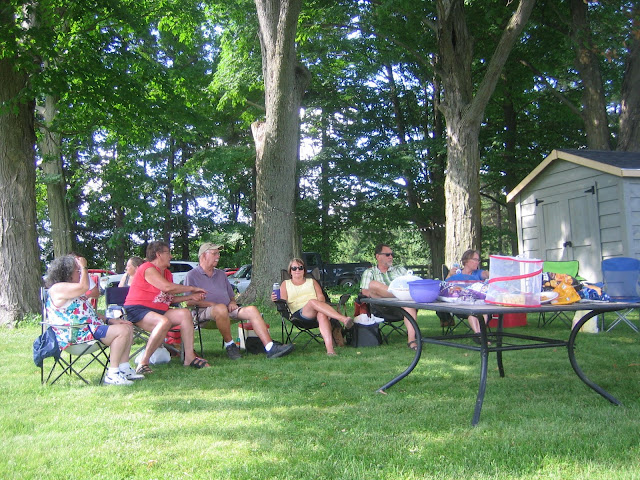 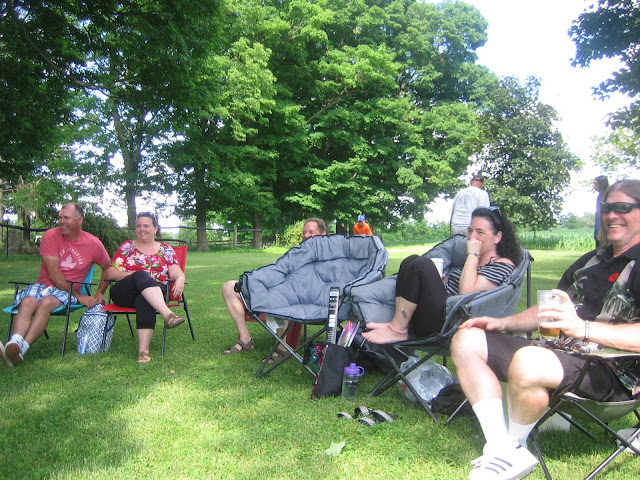 We arrived at their house around 3:30 and I was delighted to see my son, Patrick, his Dad (my ex), Fred and my oldest Grandson, Taylor. I didn’t know they would be there. Fred and I have a decent relationship now and although we can’t live together, we get along just fine. It was Taylor that was the biggest joy for me. It has been 3 years since I have seen him so I hurried over for a ‘3-yr. hug’ just in case it is that long again. He is a young fellow who is difficult to keep track of.


The party attendees arrived as did coolers with food and drink. Chris’s new band, The Wheelers, was setting up in the garage and music was playing non-stop in the background. We all gathered, introduced ourselves to each other and enjoyed the wonderful afternoon.

A lot of Chris's aunts and uncles were present which was nice. Now that I see a better view of the property, I can see how beautiful it is for them. Nice lawn, nice flower beds, trees for shade and a huge fire pit for evening gatherings. Chris barbecued burgers and sausages and around 6 clanged the ‘dinner’ pot and lid. He needs a triangle or a bell.

It was a very nice time and when The Wheelers began playing the tunes, we were impressed with the talent. Chris plays lead guitar and plays it very well so I hope they do well and have fun in their new group.

It was 8:15 when we said our goodbyes and left for home. The party would go on into the wee hours, I’m sure, and they have friends sticking around for that including Tj, Jake and Wendy, who is staying overnight. The house is turning into a ‘home’ now and I’m so happy for this transition in both Bridgette and Chris’s lives.

It was 10:15 when we turned up the lane and without too many words about the quiet in the Suite, we pulled blinds and went to bed. It was a good day for sure and we were so happy that the clouds cleared away for the house-warming. I hope you had a good one as well.


Thank you for your visit today!

Posted by Patsy Irene (Chillin' with Patsy) at 6:31 AM