On the Ridge with Friends
It was 6:45 when Bill and I got up on Saturday, June 22nd. And what a glorious morning it was. Our weather station was reading 48F/9C and the anemometer showed 1 mph winds. Perfect day for a walk. The sun was already up and the sky was a dynamic colour of blue. “Saturday Blue” perhaps. I had my hoody on and slipped on my puffy and safety vest and headed out. By the time I reached the end of the corral, I had to take the puffy vest off. I didn’t need it.

My 2-mile walk was great, only one vehicle met me but otherwise, it was very peaceful. When I returned, Bill was down in the Hangar, no sign of Ken and Kim yet. I found out later that they were sleepyheads. Must be the fresh air up here and well, it might have been the long day yesterday. 😊

He touched base with Ken and by 10 they were off in Black Beauty. Kim and I weren’t too much later when we hopped in Ptooties and I drove into Durham. First stop - Foodland, second stop – North Wellington FS Co-op, third stop – Durham Laundromat (I had to show Kim my place of employment!), fourth stop - Liquor Store and then home. I was able to pick up my yogourt NOT on sale but Chapman’s Premium ice cream ON SALE for $3.99. Yay! I grabbed some cones as well for a treat.

After we got back, Kim and I just relaxed. We read a bit and chatted even more about anything and everything.

When the boys returned Bill brought his monster plane out and put it together for some pictures next to his Stinson Reliant. Up until that moment, I thought the Reliant was a big plane. Well, that was then. The Telemaster takes it hands down for size.

After a snack of cheese around 2 and even more relaxing, our company arrived at 2:30 for Happy Hour.


Rob and Pat are close enough that we wanted them to share in the fun with Ken and Kim. We kind of broke off into two groups, mean and ladies, and sometimes that is nice. Around 4:30, Donna texted that they were done their work at the Acreage and would accept our invite if H.H. was still going on. It was nice to see them too and they got an opportunity to meet our friends. Turns out that Ken got to meet my little sister, Wendy, in O.S. earlier too. A chance meeting at Home Depot.

The ‘party’ broke up shortly before 6 when those driving left for home and time for us 4 to start supper. Bill grilled burgers and as usual, loaded and with a salad on the side, they were yummy. After dishes, Bill went out to the Hangar and I sat to write my post. I hadn’t even started it. There weren’t too many pictures taken today so you’ll have to trust me that it was a great day. How can you describe in words, a day such as this? Friends and family put the cherry on the top.

The high temp today got around 75F/24C and that was another perfect one. I took a walk down the lane to round my steps up to 8,000/4 miles today and then came inside to read for a bit. With the slight breeze and sunshine, I can feel either sun or wind burn on my lips. I don’t think this will be a late night what with having to get up early for work in the morning.


We remained outside for about an hour and once the sun started to drop, Bill got out his Timber. This is his electric plane that is made of Styrofoam. He has just recently affixed small led lights to the underside of it. 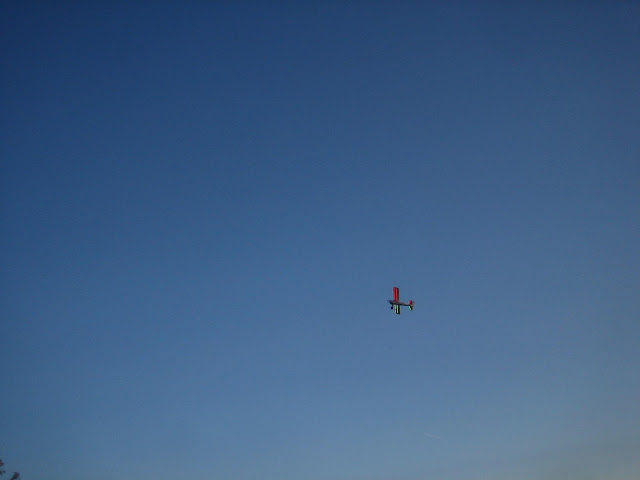 After seeing the flyers do this in Quartzsite, he knew he just had to come home and do that. Kim and I watched as it flew overhead a few times and came in for multiple safe landings. Very cool!


I hope you’ve enjoyed your day and this read, seeing what we’ve been up to.

Thank you for checking in! I love hearing from you if you choose to leave a comment.

Posted by Patsy Irene (Chillin' with Patsy) at 7:45 PM