Home on the Ridge
Clemson woke up first, at 5:30 on Saturday, June 15th. Good timing since I was getting up in 30 minutes to go to work. Now I wouldn’t feel bad waking him up to go out before I leave. We crawled back into bed and he was out like a light when I got up, dressed and washed. Even when I slipped out the door, he never moved. I was just over an hour this morning cleaning the Mat but I’ll hold that 15 minutes and tack it on to another day to make it a full shift. I just realized that it has been a month since I started working for Jamie and still think it was a smart thing to do. 😊

On the way home, I noticed that the Durham Conservation Area was having a Garage Sale this weekend and starting today at 8. I guess it was open for 4 hours last night where a lot of bigger stuff sold. It was 8 by the time I’d stopped at the bank and walked to Rob and Pat’s, so decided to swing by. I’d not been back into the conservation area from this end. At least I don’t remember it. They had a big tent, which I forgot to get a picture of, with many tables of ‘stuff’.

To be cordial, I walked around and looked at everything. Other than 3 books, a 500 pc. puzzle, 2 garden ornaments, $1 later, I left. I drove back through the camping areas and to the McGowan Falls. 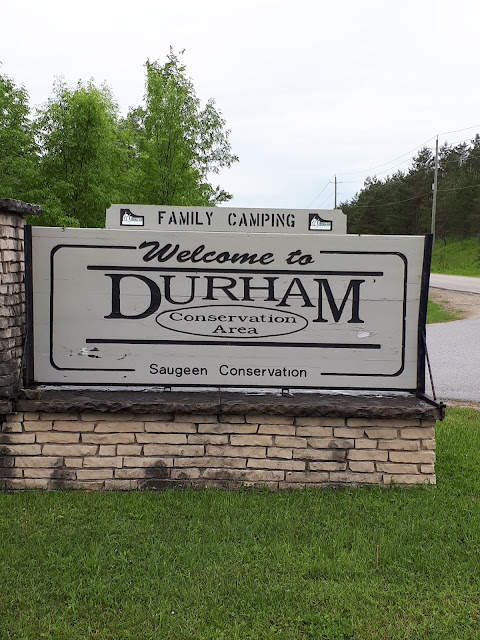 I’d never been at them from this way and I recognized, once again, my fear of walking on an iron bridge. If the walkway was solid, it wouldn’t be so scary but it is open and the rushing falls are right below. I couldn’t do it, not even to take a picture. Darn! They are so pretty.


I drove back to the entrance and headed home The rain had stopped but the gray blanket overhead had a different story. “Don’t trust me, I’m full of more rain!” I temporarily placed my garden finds and came inside to see that Clemson was still sound asleep on our bed, exactly has I’d left him. Bill called at 9:15 to let me know that he was back in Canada after his drive this morning to Port Huron. Across the border and back already! Awesome!

He didn’t need to be answering questions about his cooler and suitcase as he crossed, so left them in the CanAm trailer so will stop there on his way, go to Costco and then scoot home. I hope he brings some of that sunshine with him. It will be nice to have him home, as always. Clemson came downstairs after I made my tea and went out for more personal business before ‘asking’ to go back up to bed, if you please.

Our buddy, Pat texted from Manitoulin, just checking in to see how we were and letting us know what all they’ve accomplished. They are up there with their 2 sons and 1 grandson so a lot of wood is getting cut for burning/storage and I believe today the boys are off fishing. How nice for them!

Donna and I also texted back and forth about the 90-second keto bread I made with almond flour. Like me, she wasn’t keen on the coconut flour recipe.  I have to credit Shirley K for encouraging me to stick with the recipe and use almond flour instead. It is so much nicer and very filling! I had some with feta cheese, a hard-boiled egg and grape tomatoes. It was so filling that I could only eat half a slice.

I cleaned up and made myself a coffee at 11. That’s when my sweetie called that he had left Costco and was on his way home. He could have worked this morning, delivering a trailer to Fanshawe Park in London but like a good husband, he said that he’s been away for 3 days and thought his wife would like him to come home. 😊 Andy understood and sent him on his way. I’m glad he declined.

While waiting for Bill, I wondered what I could get into so decided to go upstairs and prematurely decide what clothes would be ‘Cancun’ suitable since when I was shopping, something new for the trip was in my head. I had already begun tucking certain ‘special’ things in the cupboard above my side of the bed. They would be things that I knew for sure were going and things that I didn’t want to be wearing this summer.

It was good for me as it is also encouragement to work on those pesky pounds around my belly. We have yet to decide what we’ll need for suitcases and whether we can share a checked case and each have a carry-on. The age-old worry of losing your checked bag makes you want to bring as much on board in your carry-on as possible. LOL good thing we have time to figure it all out and I AM being very wise in the number of clothes I'm choosing.

Somethings might have to go into vacuum-sealed bags to lighten the load. The good news is that at this stage of the game, I have made a decision on my dress and shoes for the wedding itself. Yay! I had just finished putting everything back in the cupboard and it was 1:15. Time to stretch my legs while Clemson was still abed. What a sleepy head today!  I walked out and down the lane. No sun, so no turtles out but the geese families set off at a run to the bulrushes at Don’s side of the pond when they saw me. I’m such a threat, you know.

I knew from experience that Bill would be along very soon so walked down North Line a bit and cut back through our field. The rain began lightly again so I headed back. You might be able to see why we couldn’t use our paddle boat and can’t use the kayaks in the pond. I’ve tried to zoom in but the pond weeds are almost to the surface and only get worse from here on in. Anyway, it was the right decision to sell them and with a nibble on our kayaks, we are hopeful that the deal goes through. 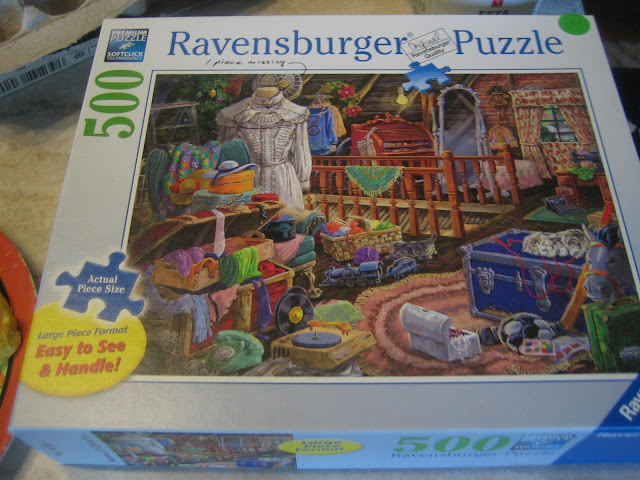 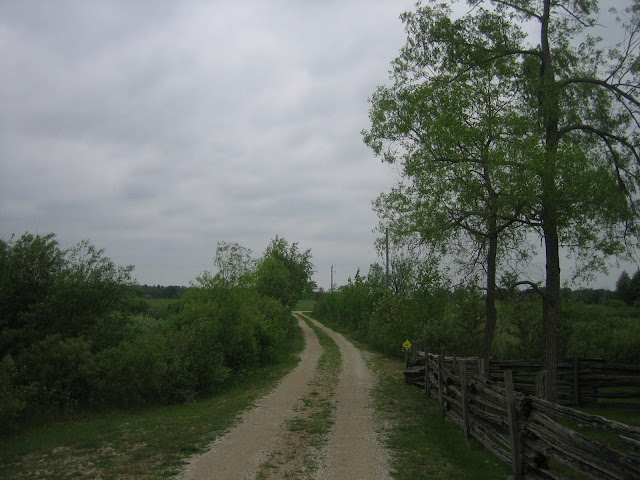 I wasn’t all the way back up the lane when I heard Ptooties coming along the road. Good timing! With everything unloaded, he relayed his day, checked through the parcels from N.C. and stretched out on his recliner. He’s had a long day already and it is only 2 pm. I was up early too and felt that a snooze might be a good idea. If I sit and try to read I think my eyes would close. So, I went upstairs with our pooch.

It was only a cat, er, dog nap lasting only about 20 minutes but the main thing is that Bill slept for much longer. He had certainly had a busier morning than I had. When I woke up, I turned the tv on and started watching another chic flick that I hadn’t seen before. Clemson and I moved downstairs and joined Bill once I heard him moving around. We all watched the movie together. When it finished, it was more Mash reruns until it was time for supper. 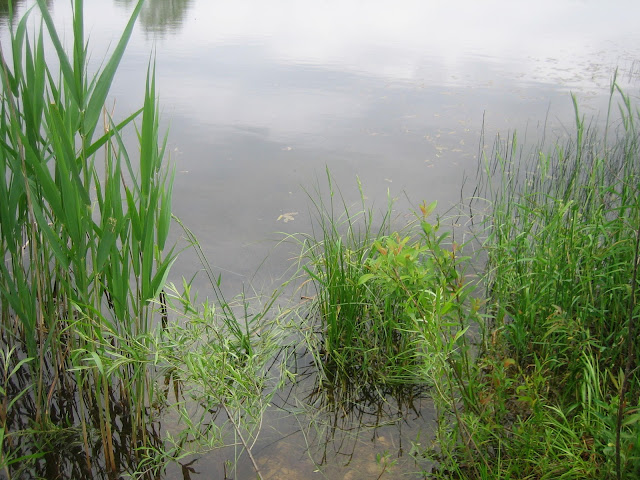 We each had our roast beef dinners leftover from the other night. It didn’t take long to warm them up in the microwave on the reheat dinner setting. Never do I recall warming up a beef dinner and having the meat as tender as the day we first cooked it. It was an easy meal and it was delicious. Clean up was also a breeze and for dessert, we each had a dish of my custard. Yum!

The rest of the evening was quiet consisting of my blog post, our books and television. We were together again just the way we like it. It was a great day. I hope you can say the same.