The Ridge
I was awake at 5, dropped off and then awake again at 6 on Thursday, July 18th. No sun out there when I opened the blinds but it was 65F/18C and was supposed to be another hot day. Bill was awake but just taking it easy in bed when I kissed him goodbye and went for my walk. 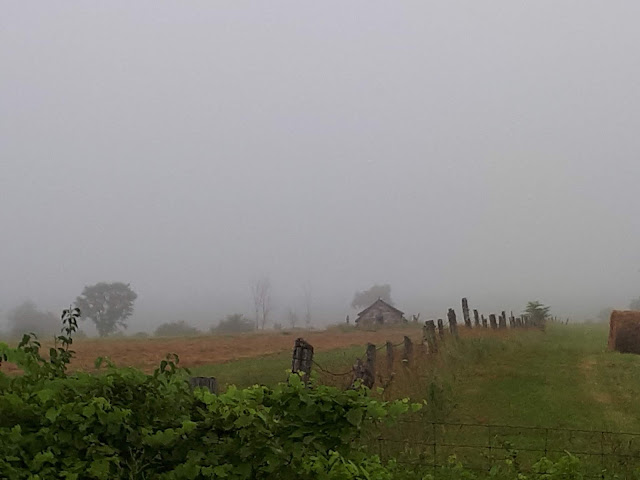 There was a light low-lying fog off in the distance as I looked across the farmer’s field. He’d cut a lot of hay last night but still has a patch left to do. It was a nice walk with a lovely breeze yet I still came back feeling the heat.

Bill told me to have my tea that he was going out to move the rocks that were dug up for his trench. Well, that didn’t seem right so I changed into my old shorts and went out with gloves to help.

It didn’t take us long, 30 minutes maybe, and I’m glad I went when I did. I’d have had my coffee and he’d have done it all on his own. Some things I can help with, others I’m useless. The sun eventually showed force and popped through the cloud covering around 8:45. With 89% humidity again this early, we hoped it would later dissipate. My fingers are sticky on the keys. We remained unplugged so will close some of the east facing blinds to keep it cool inside.

As we were sitting at our laptops, a turtle ornament, that I had purchased last summer in Durham that was velcro’d to the wall over my window, let loose and fell. It hit my head and bounced to the floor breaking one of the ceramic legs.

Might have knocked some sense in to me on the trip too, who knows? The heat must have released the adhesive and it let loose. I found some Command strips in our junk drawer and re-affixed the Velcro with the added support of the small hook.

Bill needed a couple as well for hanging a couple of things in the Hangar. I also glued the leg back on and hope it secures well enough. This would be a slow, puttering morning. The biggest jobs were done, well, except for more trench digging tomorrow morning and we had no where to go this morning.

At 10, I called Bill in for his breakfast and not feeling like the traditional meal again, I had 2 pcs. of bacon, a clementine and a high fat plain Greek yogourt. I made another B.P. coffee. He had moved the big tv from the Bunky down to the Hangar so yes, I will probably never see him now! Ha ha, just a joke between us.

His little space down there is so bright and pretty (sorry, Manly) that it will be a very nice space for him to work on his planes etc. I’m happy for him. Now, I’m getting excited about MY little space! I sent him back out and I cleaned up dishes.

I went to the Bunky and painted a bit more on that piece of plexiglass. It’s a good piece to mess around with and no big deal if my artistry isn’t worth showing. I’m certainly no artist!! I sat out there for a while with a nice breeze blowing in the north and west windows. As I held up my painting, I realized that its ‘beauty’ (putting it mildly) increased by holding it up to the lighted window.

After the noon hour, we drove to visit our friend, Rose, who is staying with her daughter right now. Rose and George are our hosts and dear friends who live in Lake Havasu during the cool months. I’ve written about them before. George is home in L.H. dealing with a couple of issues, waiting for a surgery date. Rose is kind of on stand-by but getting some family time with her grandchildren during the wait period.

When we arrived, 20 minutes after leaving home, Rose and her 5-year old granddaughter were sitting outside. It was very nice to see her again and we shared hugs all around. What a delightful little girl Beth is. She was slow coming around to us ‘strangers’ but eventually, with a little attention shown to her interests, I think we hit it off famously. I truly enjoyed the time spent with her with her dolls, her rock painting and then gathering eggs.

Bill and I had taken our swimsuits but Beth wasn’t overly interested in going in the pool so a couple of hours after arriving, we said our goodbyes. We were quite comfortable in the shade on the patio so didn’t feel the need to cool off.  I like to think that if my daughter had had a girl, she would be like this young lady and we would hit it off in a similar fashion.

Back home, we had a snack of cheese and a Fat Bomb. I made a tea and we stretched out in our recliners. I felt hot and uncomfortable, now where is that pool? I think we both dozed for a bit with blinds pulled and windows open but the breeze wasn’t coming from the right direction to cool it down inside. Around 5 or 5:30 I went outside to the King’s chairs in the shade and then eventually into the Bunky where I could stretch out again. 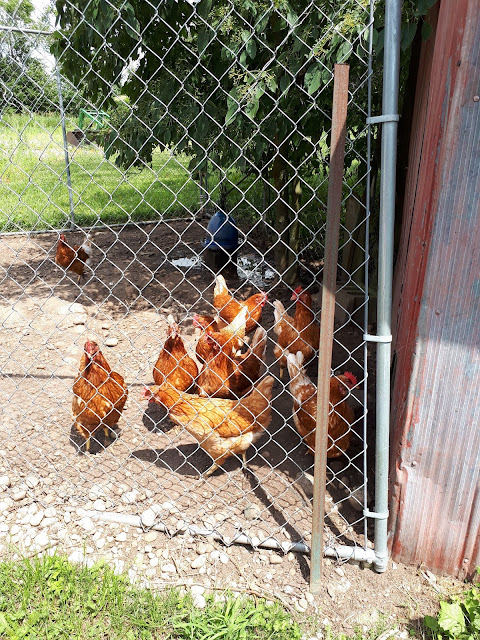 Plugging into power is a last resort but I have a feeling after watching the weather forecast for the next 2 days, we’ll need our air conditioning. Bill lit the barbecue and grilled a long link of homemade farmer’s sausage that Bob and his friend prepared. Bob gave it to us before they left on Sunday. It was wonderful! My favourite kind of sausage is farmer’s sausage and this one passed with flying colours.

Topped with sauerkraut, mustard and a salad on the side, we enjoyed this easily prepared supper tonight. No dessert for either of us since Bill has bloodwork at 7:30 in the morning and needs to fast for 12 hours. Good thing we’re full!

This was a great day and after dishes, I took a walk down the lane to get cooled off in the shade of the bushes along the way. I hope you’ve enjoyed your day too.

Thank you for your visit to the Ridge today.

Posted by Patsy Irene (Chillin' with Patsy) at 6:54 PM