Suite Goes to London, Dinner and Evening with Friends

The Ridge
On Monday, July 23rd we were up at 6:00 and in Durham by 6:30 am. Bill drove Black Beauty and dropped me off at the Laundromat to clean while he topped her up with fuel. Today, she was going to CanAm for what we hope is a final fix on our bedroom slide cables. Never say never and never say ‘last’ because it doesn’t always work out that way. This will be the second shop replacement of new cables and it has been repaired once in the shop and twice on the road by Bill and Rob.

Bill returned and helped me by dust and wet mopping the floors for me. It was nice to see Bonnie, the owner of Welbeck Lumber, pop her head in with a load for the dryer. I knew I recognized her, not having seen her since last summer, at least, but thankfully Bill called her by name. Pleasant lady for sure. We finished up by 7:30 and returned to the Ridge for our first coffee and tea of the day. It was shaping up to be a lovely day with some clouds in the area.

I texted Jamie this morning to tell him that we were in London for 2 days in case he returned from Manitoba before we got back. I don't know what condition the Mat will be in by then. He was unconcerned but on their way home and happy to hear from me.
The morning was mostly a final pack up, moving things out of the way so we could pull the Suite out. So many things didn’t need to go with us, Weber Q, our mat, our steps and our chairs could all stay behind.

We had bacon and eggs for breakfast around 10 and each had our showers. I vacuumed inside and Bill finished the outdoor process by checking tires and locking the 3 sheds and his cargo trailer. We were on the road by 11:30. It was an uneventful drive although we made a slight deviation in our route today. Instead of going through Stratford, which can be a busy bit of kerfluffle at the best of times, and scooted through Amulree and Tavistock for a change.

This was a nice route, one which we would repeat in the future. I like a change of scenery and enjoyed the many flowers, ponds and properties along the way. We arrived at CanAm at 2:30 to a much less ‘jam-packed’ lot than the last time we pulled in, which was April 6th.

They were expecting us and after checking in with Karly and Peggy, we dropped the Suite out front and in about an hour Dan brought the tractor out and moved us to the back in front of Bay 8 where we’ll spend our first night. The Suite goes in Tuesday morning and hopefully things will get taken care of toute suite! 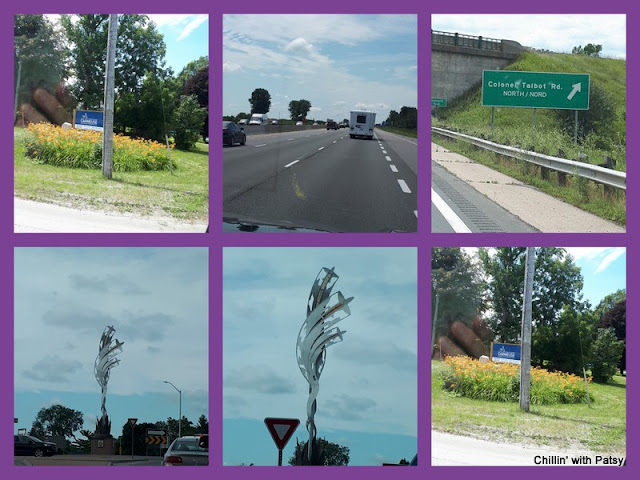 We also need to have the valve stem on one of our tires checked, it seems to have a leak and a check of the undercoating just because it is due. Once we were able to hook up to hydro and water, we got cleaned up a bit and dressed to go out for dinner with friends. First, Bill needed to stop at AVF, Derrick and Jeff’s hobby store. We picked up a few things, chatted for a bit and then went the short distance to Jim and Sharon’s. We wanted to visit while in the city but certainly weren’t expecting an invite to dine.

Of course, we should have known better as these two are absolutely made of the ‘best’ stuff, if you know what I mean. We arrived early, as is Bill’s trademark, and caught them a bit unprepared. It was one of those “I told you!” moments and Bill groaned something about ‘sometimes I’m right’. Ha ha. Sharon didn’t mind but I still felt an apology was in order.

It was a nice surprise that Derrick and Kathy were also able to make it on a short notice invite as well. The conversation flowed, drinks and munchies were consumed (I loved that easy dip, Sharon!) and then we were seated. What a lovely table display. Some people just know how to entertain in style, something I’ve never held as my claim to fame, although I try.

Sharon served individual salads, scalloped potatoes, oven-baked pork chops (which were right up to my IP standards!), green and yellow string beans with slivered cashews and a delightful dessert of ice cream, brownies and sauce with a cherry on top. We devoured the meal and I didn’t walk away with any guilt for the potatoes as I’d only taken a few. They were so good and I could easily have had a second helping but refrained!

The evening went with much regaling with stories and we caught up with what everyone had been and will be up to in the coming months. We ended the evening at 9:30 when Bill and I took them all outside to watch the International Space Station (ISS) fly across the sky from the W to the NE. They had never witnessed it before so we were happy to show them something new.

Back home, I had some water to diffuse the lovely bottle of wine that Sharon and I polished off so there would be no repercussions in the morning. This was a wonderful day ending with a perfect evening. I hope you can say the same for your day!

Posted by Patsy Irene (Chillin' with Patsy) at 5:40 AM