Damp Start, Orientation by Bill, Some Painting, Just Hanging Around with Higgins

On the Ridge
With a late night, it was nice to sleep in until 7 on Friday, July 12th.  Bill was still in slumber so I stretched my legs to get the kinds out and began to get up. He wakes up so fast from a seemingly deep sleep that it always surprises me. We rose together and made the bed and joined together downstairs. I slipped on a hoody and my wind/rain breaker under my safety vest. I didn’t realize that there was a very light mist.

A short walk this morning, just to the corner of Baptist Church and North Line and I turned around. It was warm enough even though our station said only 58f/15C. The dullness outside was not encouraging when today was supposed to be a sunny one. Hmmm, drats! When I returned, Bill went out to see why our motion detector light on the Bunky wasn’t working. He just noticed it last night when we were outside at the fire. He got it working again.

I had my tea and went out when I saw Higgins exploring. I opened the door to see him standing on our stairs. No siree, little Mr. Wetpaws, you’re not coming in right now, I’ll come out. 😊 So, we played. He runs around like Clemson used to with the ears flopping and it is such a pretty thing to watch. I laughed instead of cried as he crouched down and barked at me. Made me think of Rob getting our little bum going last summer.

Bill had promised Bob and Jo-Ann an orientation this morning on their Redwood so when they were doing that, I busied myself by repainting the N.T. sign I mentioned yesterday. Donna wasn’t surprised that the paint was fading as she picked it up on a whim at the Dollar Store. My paint isn’t expensive but at least a better paint, I think. I chose yellow as a background and will either paint or use a black marker for the lettering. That might last longer. I use a marker on my rocks.

When they’d finished the outside ‘lesson’, they had their breakfast while I made Bill bacon and eggs. I gave him the lecture again ‘don’t be upset if I only make yours. If I’m not hungry, I’m not cooking any for me’. He needs to understand that I truly don’t mind and actually prefer to make him a good breakfast than having him eat cereal or toast. We teased that maybe by the time he’s 70 he’ll get it. Ha ha. I did the dishes up while he went out to putter with our old cooler.

Unfortunately, it gave up the ghost on his last trip to London. The handle broke last summer so he’d rigged a new one but now the cord connection completely quit. For what he does when he goes to London, he needs a plug-in unit to keep his food in. So, the last trip in involved a stop at Canadian Tire first to pick one up. That was money we weren’t counting on spending but no question about it. It only cools but that’s what we need it for. He will try and fix the old one in his spare (ha ha) time to use in the Hangar for his Coke.

Bob and Jo-Ann were having an issue with their running board truck lights so left Higgins with us while they drove to Mount Forest, 20 minutes away. Because that shop doesn’t do warranty work, (!) they referred them to Arthur instead. Higgins was settling down really nicely and at one point I put him on his leash and we walked down the lane and to the corner. He is a very good little dog even though it is obvious he misses Mama.

I sat outside with him for a while and then when I needed to come indoors to slice more peameal bacon, I took the long rope leash down to Bill’s Hangar. Higgins was welcome inside but he wasn’t content unless we were both indoors and sitting.

He wanted to be outside. I finished painting my sign and I think it looks great! Around 2:30 I walked down to get the mail and rehang it. Bill and Higgins were waiting for me to return and we all moved up to the Suite. Bill managed to finish the front little door. At least enough for today.

When we sat on the patio together, there was some warmth coming into the day and even though still quite cloudy, the rain wasn’t going to grace us with its presence anymore. I took my hoe up and took care of some of the weeds up there. My radishes aren’t looking too great, the second batch didn’t take off at all. I guess I didn’t water them enough through that hot week. I picked some from the first row. To give him a break, I took Higgins off the leash to join me up there. He did for a while but soon returned to sit under Bill’s chair in the shade.


We all came inside around 3:15 so Bill could snooze and I could catch up on here. Higgins checked things out but mostly hung close to Bill where he could check out every window.

Finally, he settled on the couch off which I’ve removed the Kokopelli blanket. I liked the look of Jo-Ann and Bobs couch without a blanket. Especially in the warm weather, it isn’t necessary and looks great. I should do what Rob does and polish it every month or so. 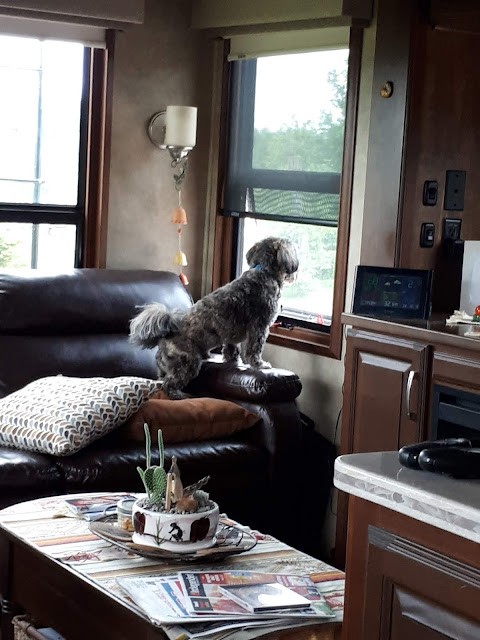 Higgins’ Mom and Dad returned home around 3:45 and you talk about a happy little boy! The conversation just carried on from there and we sat for a Happy Hour under our awning and the sun was hot.

It was late coming but we welcomed it. We were being treated to a salmon supper tonight with Jo-Ann’s homemade salads. My goodness, such a nice meal and all good for us! After we cleaned up dishes, then came the rhubarb dessert which we are hard pressed to name.

It is like a rhubarb custard pie in a 9 x 13 dish and ever so yummy. With a shortbread-like base, I fell off the sugar/carb wagon. Woops! I took over the Fat Bombs so they could also try them and they were a hit as well. The evening rolled on and we learned a new card game called Five Crowns. Easy to learn and by 10:15 we finished. Things got started late but we were all ready for bed and we walked the short distance home.

It was a great day and evening with our friends. Sometimes you click. 😊 I have work in the morning, so caught up on my post, downloaded pictures and said goodnight. I hope you had a great day as well!