The Ridge
On Sunday, July 14th I woke at 5 and rolled over all 4 ways until 6 when I last looked at the clock. It was too early to get up on a day off especially! Bill was still sound asleep. Next thing I knew, it was 7:30 and the space beside me was empty. After getting up and coming downstairs, Bill told me he’d only been up 20 minutes so we both slept in a bit.

It felt warm in the Suite after last night’s cool down but we had closed our windows before going to bed around 10:30. I looked outside and it was too foggy across the area and the pond to go for a walk. I couldn’t see North Line so I made my tea and joined Bill until he headed down to the Hangar. Jo-Ann was outside with Higgins so I took my coffee out and sat at the King chairs. With her drink, she soon joined me.

We looked at some of her pictures of Arizona from 2014 and then took Higgins for a walk to Turbine Lane. She made me work this morning! She really moves and this ole gal had a time keeping steps with her. It was good for me though and once I got the groove, coming back was much easier. She said she was trying to ‘rein’ it in too! Higgins was a good boy and used his ‘new to him’ retractable leash.

Last night, a lot of Clemson’s things moved to a new home, a new puppy and we feel really good about that. Setting up a new trailer is the perfect time to have duplicates of things and when you have a pooch, he needs duplicates as well. Clemson liked Higgins when they had their first meeting in June so we know he’d be happy to share his stuff.

We sat with the boys for a while outside when we returned until 9:30 when I made Bill his bacon and eggs.

They had finished laying the flooring in the Hangar last night and it is looking mighty fine! I’m happy because Bill is happy and that is putting it mildly. Bob was a huge help in getting that project to 95% completion. Awesome! After breakfast, we all hopped into Black Beauty and drove over to the Acreage. Gerry had invited us over to show Bob and Jo-Ann their summer haven.

Bill filled the water bladder as well and we’ll use it either for washing a vehicle or two and/or topping up our fresh water tank. At least we have it on hand and he was able to show Bob our easy procedure for getting water. They liked Donna and Gerry’s Landmark 5th wheel, made by Heartland as is their Redwood. The Acreage received praises too and then we sat with Mike at the pond. None of us was more surprised (or should I say shocked?) than Jo-Ann when Higgins walked to the end of the dock and jumped in the pond! A squeal from her got our attention.

Bob emptied his pockets, and so did Bill, prepared to jump in after him. He’s just a little guy but also smart and turned around swimming to the dock, saving both guys from getting wet. It was scary, comical and so cute all at the same time. Jo-Ann was afraid he’d do it again so we put him on a rope that Gerry had. Now, soaking wet, he looked even more like our little Clemmy.

Clem did NOT like water and the only time he swam like that was when Bill took him into the pond about 6’ out and let him swim to shore. Let’s just say we were all entertained today.

Soon enough, we headed back home and our company began packing up. Oh, after a group photo on my funky tripod and phone camera. All the grumbling we endured from Bob and Bill about taking a picture. Good grief! This is memory making time!

They were ready to pull out around 2:30 and I asked ‘were they not wanting to dump?’ Oh yes! They may as well, instead of going to a park in Tavistock. This was another ‘virgin’ project so it was good that Bill could help show Bob the process. The first time is always a bit intimidating so it went well and he learned for the next time. We waved goodbye as they went down the laneway. It was a great visit and we were happy to get to know them better.

For some reason, Bill and I felt kapooped so came inside with our books. Well, I tried sitting outside first and the sweat bees drove me nuts again so that didn’t last. I moved inside and relaxed. We read, dozed, read some more and then around 5:30 we got the ‘arrived home safely’ text. Now we can really relax. We certainly hope they come back and we would like to accept their invitation to their cottage at Turkey Point soon. I’ve never stayed at anyone’s cottage (without our own rv).

Bill went to the Hangar to do a bit more sanding for his base board trim and then at 6:00 after I took a walk down the lane, he lit the Weber and grilled burgers for supper. I debated the bun but went with it in the end. It was a filling burger; no salad was necessary. For dessert, no rhubarb custard tonight, we finished the last two Creamy lime Jell-o dishes with a Fat Bomb. I need to pester Jo-Ann for the recipe for the rhubarb dish, loved by all of us.

After dishes, Bill went down to primer his wood pieces and then called it quits for the night. I’m not showing you the flooring intentionally, once it is done Bill can take pictures and write his own post. This was a wonderful day although we were saddened to say goodbye. The time spent with them and little Higgins was A-1. I had a sweet cuddle with him on my lap while the hooking up process was going on. 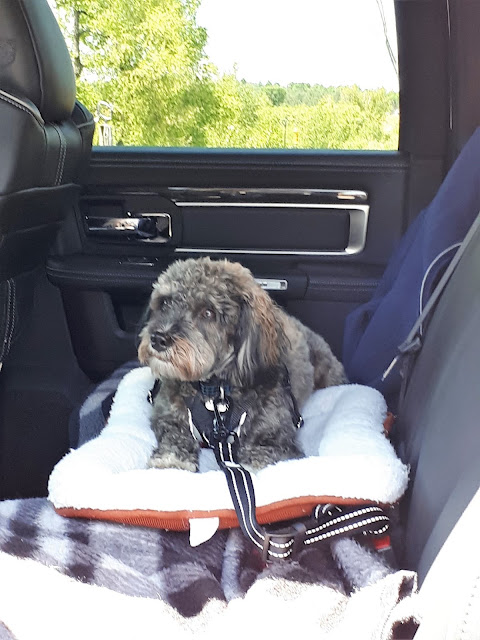 He kept his eye on Jo-Ann but only a couple of times seemed like he wanted to jump down. I think he was tired out. I hope your day was a good one too! The weather was absolutely perfect reaching a high of 77F/25C and hardly any wind to speak of all day. Let’s have a repeat tomorrow!

Thanks for stopping around today. Drop me a line if you wish.

Posted by Patsy Irene (Chillin' with Patsy) at 6:55 PM