CanAm, London
Bill and I woke up at 6on Tuesday, July 23rd which is pretty normal for me, after 8 hours sleep. We were in a parking lot, oh yeah. I could’ve walked that early, the highway would have been pretty quiet, I think. Instead, I accepted Bill’s offer for a tea and we sat and enjoyed them together. A birthday is happening back home today. My sister, the closest aged sister to me, is celebrating and 'almost' special one. You can deduce from that as you please. So, Happy Birthday, Donna!


I caught up on a couple of blogs and Bill wandered inside. Soon enough Bill returned and said ‘okay, we can close up, they’re taking us in the shop’. I did the final preps inside and brought the slides in. All I needed was my phone, laptop and purse and I went out to meet up with Bill. The waiting game that all rv owners have played a part in began. We’ve all had service of some kind or other, sitting in lounges, at the mercy of the dealership technicians.

We had a coffee and then at 9:45 Bill indicated that White Oaks Mall would be open so we drove there to get some shopping done. He still needed a nice casual white shirt and a bathing suit before the October wedding and I’d suggested Old Navy. This couldn’t have been easier, as we walked in to the men’s area and it was the first one we saw. Bingo! From there, we found a couple or three walls of swim suits and he stepped out of his comfort zone a bit and found a very nice one. 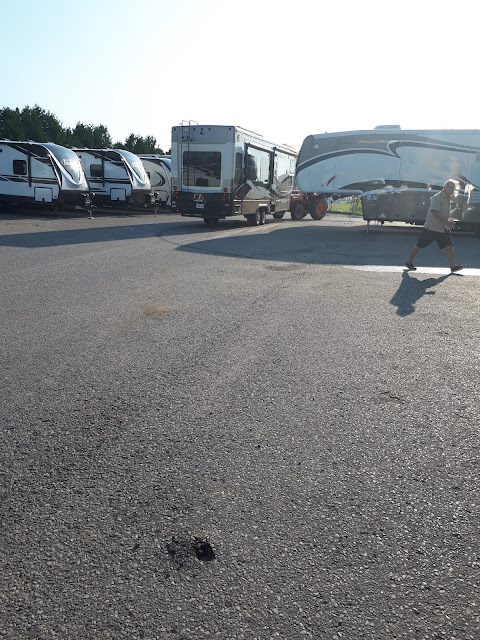 Both items were on sale at 50% off or less and who doesn’t love a sale? We even found him a pair of shorts and that was when I broke the mould and said ‘um, I’m going to peruse the ladies’ section’. CLEARANCE!! Popped out as I turned the corner so of course, I lingered. Just what I don’t need more of, I found a couple of adorable dresses at $15 so tried them on and walked out with those in our bag as well. As Bill does for his hobby, I paid for the clothes out of my savings.

We made a couple of other stops, but first we drove across Wellington Rd. to the mall to get a bite to eat at Tim Horton’s. I had a sausage, bacon and egg wrap with a tea and ordered Bill a glazed cinnamon bun. We sat to eat that before walking down to Bentley’s to get an idea on the price of luggage. We’d sold our previous set, which was pre-house sale.

Now with full tummies, we went to Best Buy to check out pocket cameras to replace our little Canon Powershot. Getting a price on one that I liked we then down the street to Henry’s (where we deal all the time) to compare. They each had the same one for a difference of $20 but it isn’t always about the deal. Even though Henry’s was the more expensive price, that is from whom we ordered one.

Think about it. Best Buy – multiple hovering staff with semi-knowledge on multiple products but invisible when you need them. Henry’s – professionally trained staff who know their stuff, don’t try and talk you into anything over and above and quite helpful with what we need. This might be a bit loyalty-smacked but we’ve been treated well every time we visit.

Before leaving the store, Jose suggested that we bring my big camera in and he would see if he could figure out where the dust spots were coming from. We told him we would be back later in the day. From there, we went to AVF again to return the wrong covering and order new.

We returned to CanAm and picked up my camera, checked on the Suite and then headed right out again to Henry’s. Let’s catch him before the day is done. It seems like a lot of bouncing around but we have nothing else to do today. However, it is tiring. Bill drove to his Forest City Flyer’s flying field on the way back to CanAm in the hopes of us both having a rest in Black Beauty. (enter laughing face!!)

Two vehicles were there, two flyers so I knew immediately that we weren’t going to get the peace and quiet we’d planned for. Bill knew the 2 guys so chatted with them and I stretched back in my seat with my book and then with my eyes closed. Bill joined me but it was pointless. There was no sleep to be had, not there, not yet.

At 3 we headed back to the shop to see how things were coming with the Suite. We were still at a standstill and the day was running out. Hmm, unfortunately, you just never know how repair jobs will go. Through no fault of the crew, there can and often will be delays. I set up my laptop in the lounge and caught up on my blog post.

We weren’t the only people waiting. There was a young lady with her parents waiting for a ‘new-to-her’ trailer to be ready. It wasn’t going to be today and I’m sure that is disappointing for her. They got their walk through with Dave and soon after they went out, Bill said our Suite was outside and opened up.

No, she isn’t done – but close. The cables have been replaced and the wood trim on the inside needs to be re-installed. The tire isn’t fixed yet so that will be a morning job and they found a couple of other small issues that they are going to look after for us. Now is the time, we say, while we’re sitting here. This has been a full day’s work for Al and Steve and even Ben did the undercoating for us. It was around 4:30 when we were back inside.

The waiting and running around is tiring so I stretched out on the sofa and read and Bill was able to catch a few zzz’s. We were going to go out for supper but decided that we’ll save some $, since some of this not covered under warranty will cost a few bucks. The nice thing is that when we arrived yesterday, Karlie, the pretty little greeter/receptionist, handed us an envelope. For referring our former neighbours in London to CanAm, we received a thankyou $100 certificate for their latest rv purchase. Yay! That was a surprise, totally not expected.

Before the girls left inside, I retrieved about 6 Fat Bombs from the freezer, cut them in half (for sharing) and took them in to Wendy. She had asked earlier for the recipe so she may as well know what and why she’s making them! For supper, we settled for a true ‘camper dinner’. Weiners from the freezer and beans from the cupboard. As simple as opening a can and warming them up. We cleaned up dishes and I downloaded pictures and finished this post. 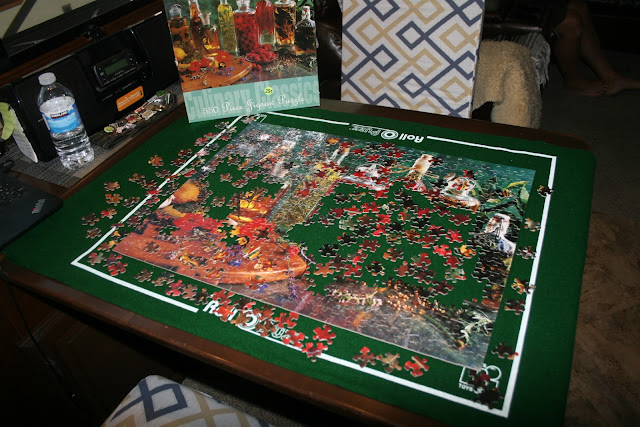 I only got a couple of miles walked today with all the running around but it was better than nothing. My day was made today when I saw Anna, one of the sales staff. She saw Bill and greeted him pleasantly, as always. When she saw me, she gave me the best “oh! Hi!” and that was the icing on today’s cake. 😊 Thank you for that, Anna, I’m still giggling over your reaction and apology to my hubby.

The evening was spent with me sitting at my jigsaw puzzle at the table. If I sat in the chair with my book, I know I wouldn’t last long.

Have a great night! Thank you for popping in.

Posted by Patsy Irene (Chillin' with Patsy) at 6:06 PM