A Different Monday for all of Us

Sunday night, I went up to bed at 9 when The Good Witch was over. My show was on and since I’d previously caught up on all the recorded episodes, I was up to date. I said goodnight to Bill and Gibbs, who was by this time feeling better after eating his dish of supper at 8, and slipped upstairs to turn Why Women Kill on. We close the door between the rooms so the tv is not a distraction. Especially when both tv’s are on.

I heard movement downstairs just as it neared 10 o’clock and my show was ending. I figured Bill was coming to bed. He’d taken Gibbs out for his last piddle and the next thing I knew, Gibbs was coming up to see me. Bill lifted him up to the bed and went back down and closed the door. "stay with Mom for a little while", he said. I was happy, actually, because I was worried about him all evening and Bill knew that. He seemed better, still a warm little nose, but he cuddled into me and/or the blankets and rested. 😉

Bill joined us later, I don’t know what time, and I left it up to him whether he put Gibbs in his crate or not. We both want him to sleep with us but is it too soon? Will he settle down? Apparently, yes. I think it was 2:15 when they got up and Bill took him out. I’m thinking Gibbs was either restless or maybe Bill had to get up. I was pretty much in dreamland so I’m guessing. After going outside for a piddle and poop, he went into his crate for the rest of the morning until we got up at 6:45. Not a peep.

So, today, Monday, July 19th Bill was taking Jazz to work. We agreed that he wouldn’t take it to the job site because the parking and chance of upset when moving vehicles around could be risky. However, there is a Forest City Flyers (his London RC club) meeting tonight in the big city. It will be a special meeting because the property that their field is on has been sold by Ford and purchased by Amazon. That update hopefully will be discussed in the hopes they can still rent it at a decent cost. 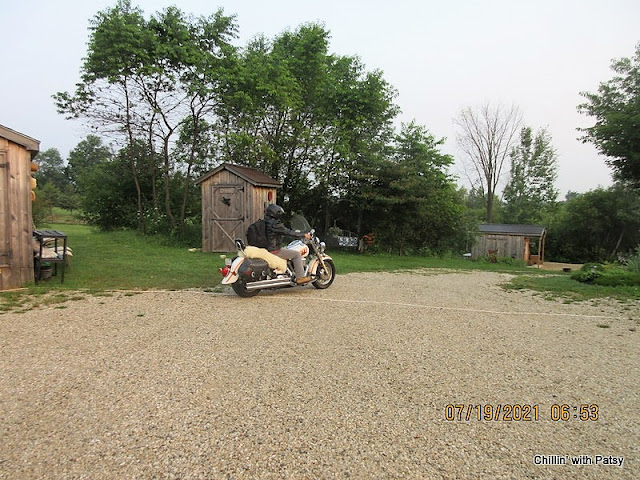 There could also be discussion regarding rules about Covid restrictions and of course, flying if anyone wants to before and after the meeting. Bill won’t be flying, for obvious reasons. He loves the London club and knows many of the regular members whom he has known and flown with for years long before I met him. I wanted to support his decision BUT I worry about the 2 ½ hour drive AFTER a day of work in this heat, especially, not to mention the drive home in the dark.

If he took the car, he is more likely to get sleepy and his wife won’t be by his side to keep poking him. 😊 On the Yamaha, that won’t happen and he is anxious to get out for a ride anyway. The challenge was in what to take. Lunch for work including liquids, clothes to change into after work, jacket, chaps, just in case it should be cool on the ride home. Chances of that are slim but 16C/64F on a bike is cooler than you think. I would need my leather jacket, he may not.

So, Gibbs and I said goodbye to him at 7 (my he looks good in leather on a bike!) and then I left the little guy in his crate and went into Durham at 7:15 to clean the Mat. First job there was to clean out the Lost and Found box. So much stuff has crammed it full and none of it has disappeared over the last 3 weeks. Time to get rid of it. I don’t usually sort through it, so just piled it into a plastic garbage bag and set it in the locked room for disposal. A lot of it was mismatched socks etc. 😆 I find them all the time stuck to the inside of a washer.

I found a few decent things my size (which means my sister’s sizes too) and threw those 5 pieces in the washer and brought them home to dry on the line. We’ll be having a mini exchange at LadyFest next week and maybe someone can put them to use. Next week! Holy cow! That is coming up fast! 😊 Bill texted when he arrived at work and then again to check on Gibbs. I guess I worry so was pleased Bill kept in touch. I’m happy to report that he is back to normal and ate a good breakfast. All things are normal again. Gibbs, I mean.

Bill reminded me to take him in for an up-to-date weigh-in at the vets. He needs his flea and tick meds for this and next month and he hasn’t been up to the 10 lbs. yet, where he needs to be to get them. So, we took a drive back into town and Gibbs weighs in at 12.6 lbs! He has just been growing like crazy and he is a solid little mass of fur! Ha ha. He’s healthy, obviously, and although we worry about what he gets into, the free run is really good exercise for his chubby little self.

At home, I had my coffee and warmed up some soup. I debated on what to get for supper until I remembered that it will be just be me, so that decision just got a bit easier. If I can figure out the zucchini pizza crust, I’ll make myself a pizza! Gibbs and I shared a very quiet day. It was just too hot to be outside for doing anything. It’s 27F/81F with an added air quality warning from the humidity. We sat under the awning on the patio for about half hour and I had to come in, not much of a breeze. The little guy was quick to follow.

Inside, he sat at the base of the stairs. *hint hint*. It was around 4 and I could tell he was missing his Daddy. Every loud vehicle he heard, he watched the laneway when we were out. 😊 Sweet. I gathered that he was looking for a snooze and once I mentioned it, he hopped upstairs and we settled down. I read and played my online Scrabble-Go on my phone while he jockeyed for the coolest spot to lay. I was surprised that he slept for an hour.

While up there, at 4, Bill texted that he left work and was headed for London. When we came down at 5, I started on the pizza. The recipe I chose went well, I was feeling very positive even though I had to scramble for toppings. The thing I did wrong was not making the crust as thin as I’d like so it didn’t get crispy. The good thing is that there is enough leftover for 3 lunches for me and I’m getting my pizza fix! It tasted pretty good.

Bill texted again at a few minutes before 7 that he was safe and sound at his meeting. *sigh* Gibbs and I went down to the mailbox to place a card and pick up the recycle bin. He had a little upset in the house with some liquid throw up but seems to be fine otherwise. He eats all of his supper and his ‘dispensing’ system seems to be working just fine as well. 😊 I wonder where he’ll sleep tonight? That will depend on Bill when he gets home and how tired he is. I think I know the answer to that!

I did the dishes and sat with Gibbs to watch some tv of my own choosing. This was a very lazy day but a good one all the same. Hopefully tomorrow won’t be quite as hot so I can do some more weeding or trimming outside. Today reminded me of when I was alone with Clemson and Bill was driving to CanAm. I'm glad he isn't doing that anymore although I wish he wasn't working every day.

Update: Bill got home safe and sound around 11 pm so Gibbs and I went out to greet him as he parked Jazz and helped him bring his day’s gear inside. I’d made his lunch for him so he didn’t have to do that tonight or in the morning. 😉 Thank you God for bringing him back home to us safely.

Posted by Patsy Irene (Chillin' with Patsy) at 8:01 AM

Email ThisBlogThis!Share to TwitterShare to FacebookShare to Pinterest
Labels: change in the day
Location: Priceville, ON N0C 1K0, Canada