It was a sleep in day, on Saturday, July 17th, although it shouldn’t have been. I had a laundromat to clean and laundry to do. That changed though when Gibbs and Bill came back to bed at 5:45 and when the little guy settled down, so did the adults. 😊 It was after 7:30 when we finally got up. Bill sorted most of the clothes and monitored Gibbs (kept his attention) while I slipped out at 8 with the basket of clothes. 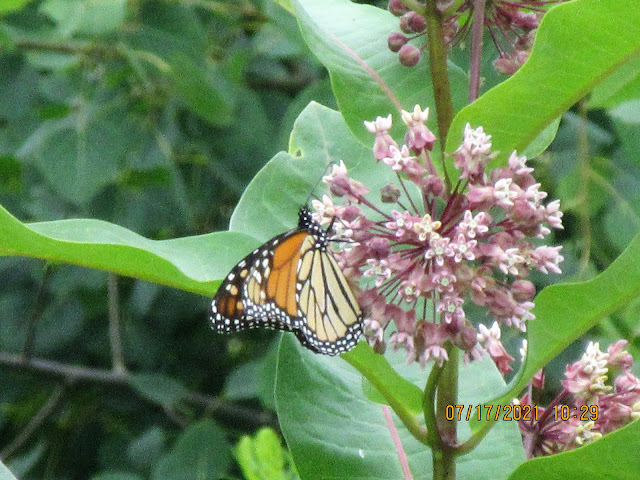 Only one customer in the Mat and even though the sky was a light gray mass overhead, I’d decided to bring the laundry home to hang dry. We knew it wasn’t going to rain and the warm air and wind would dry them during the day. Bill had done the dishes while I was gone. We were just lazy last night in more ways than one! My boys were waiting outside for me and last night Bill and I agreed that we were going to block up the skunk hole and let Gibbs run free. He is happier that way and he needs the exercise he gets running around the property.

Whether we ‘unblock’ it at dusk will be determined yet. We aren’t 100% sure that is where they are so if they dig to get out, we’ll know for sure. My soaked rags don’t seem to be doing anything, at least there are no footprints. I’m not surprised. From the time I got home, it was pretty much go, go, go, for all of us. Bill went in to the hardware store to get things he needed for that ongoing project, and then we both had to go back when he needed to exchange something. Woops!

I can’t quite remember in which order, since the morning zipped by for me, but we had bacon and eggs for lunch and Bill had a snooze upstairs. Gibbs wouldn’t settle down so came down and slept downstairs. I believe it is too hot up there for him and there is definitely more air down here on the floor. Bill shouldn’t take it personal! 😊

After dishes, we set to work. He worked away at his work and I went up to the berm to get rid of the dreaded weeds. This is a hilltop garden I don’t mind digging in. Guess what Gibbs did? Yup he ran back and forth between us, helping and supervising where he could. Ever tried hoeing and weeding a garden with a 4- month old crawling all over, under and around you? 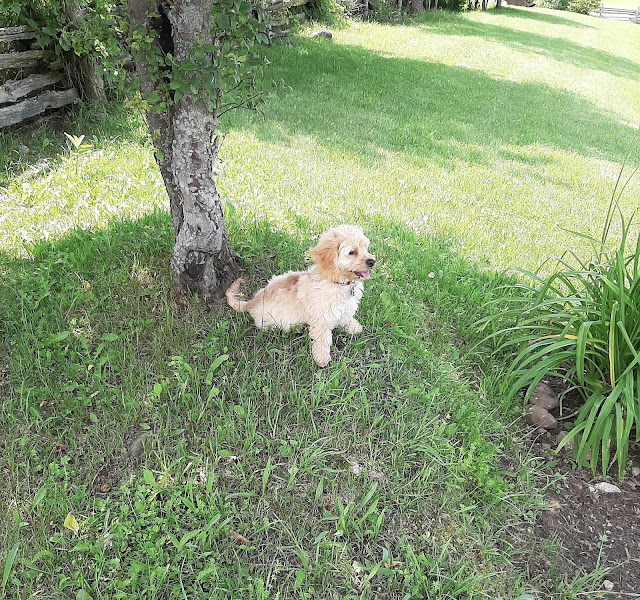 I’m sure he thought he was helping by digging in the area I was working in…………..At one point, when I sat to make it easier on myself to gather the pulled weeds, the little rascal took that opportunity to sit on my lap. Only a couple of times did I have to raise my voice and send him to Daddy. I have 3 gladiolas that are just taking hold and they are fragile. The hostas and lilies are not so it didn’t bother me when he ran in and around those plants but my glads are different.

Without tying Gibbs up, I knew there was no use in me trying to week my vegetable garden. He would trample those precious plants and that would upset me. So, it was time to call it a day for me. It was 3:00 or later when I came in and poured Bill and I a cold drink. Happy Hour, Bill called it, so we sat under the awning and rested. Bill put his things away too and puttered away down at the Hangar ‘for fun’.

When Marilynne called, I listened for a while and then came up to bring the clothes in off the line. Gibbs still was running back and forth, wearing himself out, Good! A method to our madness. 😊 He has fun and to be honest, so do we, watching his antics. He is getting good at knowing his boundaries but then just as we think that, we find him reaching farther and farther over the edge to the decline. And suddenly, his great hearing is not working.

I gathered him up, by tricking him of course, and we came in. When he crashed, I had a wonderful shower and then sat and started my blog until Bill came up at 5:30. It was going to be burger night, even though Bill had that last night, he didn’t mind. But then I remembered the leftover spaghetti in the fridge. With a salad it would be great and save us from too much work. One of us would be manning the Weber Q and this will be easier.

I’d picked up 3 books in town today, two from the book exchange box and one from the end of a driveway. A lady I bought candles from years ago had small boxes spread down both sides of her driveway with free stuff. Of course, I had to stop and peruse. A book, rolling pin socks, a ball for Gibbs – heck why not? 😊 So, it was time to get supper started and I was hungry for it. It was 6 o’clock and we were eating within 30 minutes.

That was filling and we decided to wait to have our dessert until later. Or a snack. After dishes, Bill fed and then took our sleepy Gibbs out for a piddle. He is worn right out. We watched a movie together, a Christmas in July movie. I can’t believe I just said that but it is true. Some of these movies are pretty good and I’m enjoying a few. I worked on my blog as the evening progressed since I finished my book last night. I have yet to decide what’s next on the reading list.

This was a great day made only better by the email I received. If you remember earlier in July, I had received an item from China that didn’t at all resemble what I ordered. It has been an ongoing process of dealing through PayPal to either get the correct item or to get a full refund. The vendor originally offered me $9 USD (I paid $25.98 USD) to resolve the issue. I denied that yesterday and today got this final email from PayPal. 😊