Morning Walk, Back at the Garden, Gloria’s Invite, Sweeter Invoice

On Monday, July 12th, I never heard Bill get up at 5:45. I never even heard him bring Gibbs up to the bed so he must have been very quiet and convinced the little guy to be the same or I was in a dead sleep. 😊 When I did wake up about 5 or 10 minutes later, Gibbs came up gently and gave me a morning kiss – even before Bill did! Nice and gentle so he is learning to be gentle around our faces. Licks are better than nips.

We stayed in bed until Bill was ready to leave but it really bothered Gibbs that he wasn’t free to help Daddy tie his work boots! While I was in the bathroom, he couldn’t stand it any longer and jumped off the bed all by himself! That took courage! Bill was just pulling out by the time I was dressed and had Gibbs out on the leash but he at least got to see Black Beauty pulling down the lane so he was happy.

He has really spent a lot more time with Bill this past weekend, especially yesterday, so I wondered if he would whimper more when he left. He did the usual whine and was content to be with Mom again. 😊 I sat with him until 7:30, he was so cuddly and sleepy! Then I put him in his crate and went for my walk. I likely could have left him out but then I would worry about the time I was gone and my walks are all about me and everything around me. 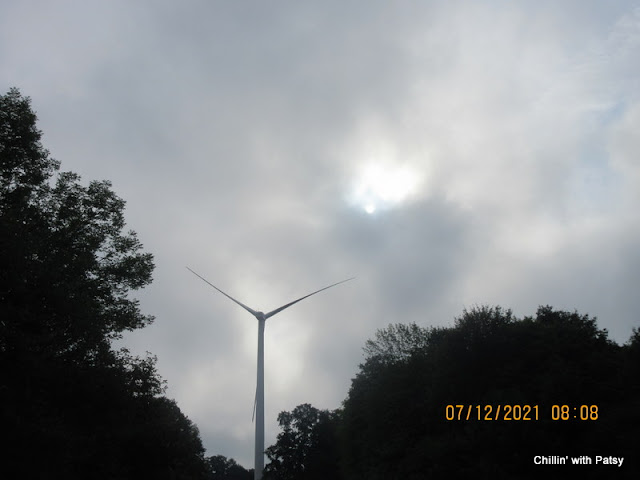 It was a great walk, past Turbine Lane to the gate entrance of the gravel pit property on the hill and I turned around. I could feel the humidity already in the air so glad I walked early.

Back home, I had my tea outside with Gibbs and when he started barking, first at the geese bathing in the pond and then at something by the storage shed. I looked up just in time to see 2 adult skunks sauntering down the berm to the shed. Now we know what critters dug that hole! Crap!

Gibbs saw them too and was off leash. You can imagine my heart rate at that moment. I called sharply to him and he stopped halfway across the lot and looked at me. Still barking. I squatted down as if I had something for him and coaxed him back to me where I grabbed his collar and put him on his rope. Phew! He actually came to me which was the biggest surprise. 😊 I’m sure there is a family under there, and have set up house for the summer. Darn it all!

After that, I wasn’t comfortable letting Gibbs out free so kept him tied up. At 9:30 we both hopped in Ptooties and went down the road to pay for our Cub Cadet but the invoice wasn’t made up yet. We were quoted about $700 a few days ago which stunned me but at the same time, it would be a great mower with all the wee issues fixed. That is always a good feeling to know Bill wouldn't have problems.

That was a short drive taking about 10 minutes so I decided to turn to the east and go further down North Line. Just a Gibbs and Mom drive. It is gravel so I drove slow and he sat on the passenger seat until we met Gloria from down the road and after we said hello, he sat on my lap. He was a good boy. What a neat drive it is, up and down, over bridges and streams and through sheltered treed curves. There are also some strange, yet interesting sights.

We crossed Glenelg Rd 23 and went as far as North Line went and turned south on Artemesia Glenelg Townline for a short bit before I turned back. I didn’t want to travel on Hwy 4 to come home (boring) so we poked back the way we’d come. We met Gloria again and I stopped to chat. I learned that her working career was with the school board too. She invited us for a campfire this summer and said she’d leave a note in our mailbox. Unfortunately, I didn’t have any of our rv cards on me to give her. This works, she walks by every day. 😊

Back home again, Mary at Northline Service called with the final invoice total and it was $250 less! Once they got in there, certain things didn’t need replacing after all so I was thrilled to tell Bill that. They will deliver it home to us Wednesday, all included in the price. I went out to do more edging today along the big garden and tried it with Gibbs on a tether where he had water, shade and a bed to lay on. That worked for about 20 minutes but he wasn’t relaxing so I put him inside where he settled down.

I worked away until 12 noon and I knew the weakness I was feeling was because I’d only had my tea. Time to eat something. I made a coffee and rinsed out my shirts from yesterday’s pre-washing. With them on the line, I warmed up the clam chowder and the leftover omelette from the fridge. It was kind of a mixed up lunch, huh? That was enough to fill me up though and after chatting with Bill about the mower and the skunks, I went back to the garden. I’m almost done that section.

Working steady along the north edge, I decided to trim/cut back the corner bush (of which has no name) because it is crowding out the Shasta daisies and the hosta. Sometimes it seems like they are all fighting for space to grow. That sounds like a grand reason to thin things out in the fall and move them to the ‘dreaded’ corral hill. 😊 It was almost 3 when I got that done and it was time to quit for the day. The berm can wait for another day. I was hot and felt quite 'buggy'.

I made a cup of tea and sat inside with Gibbs watching two episodes of pre-recorded Why Women Kill. Bill came in about 4 pm so I stopped there, leaving one more for another day. He and Gibbs went up for a snooze but Gibbs was kicked out soon after, not wanting to settle down. My sister, Gayle, has come up with another idea for our Ladyfest so us girls went back and forth on Messenger about our options. It will be fun no matter what we all decide.

For supper, Bill bbq’d a huge bone-in butt pork chop for us to share and I made rice and cooked veggies inside. Supper was good and we didn’t need dessert. What a nice surprise to have a text from Rob and Pat about popping out for a visit. They arrived shortly after 7 and we had a great catch up visit. We hardly see them anymore. 😞Gibbs was a little monster, being quite excited for their company, so I hope they didn’t mind him too much.

I should have grabbed my camera when they left so I could get a picture of them in Rob’s red truck. I didn’t. ☹ For the remainder of the evening, which wasn’t much for me, I worked on my blog and Bill wanted to watch one of his movies that I'd just watched earlier, so I went upstairs and was asleep by 10:15. This was a good day; I got the one garden finished and two down in the corral area weeded as well. I’m happy about that.

Posted by Patsy Irene (Chillin' with Patsy) at 8:16 AM