On Sunday, July 4th it was a bustling day but in a good way. I can’t even recall what we did first thing, besides Bill getting water from the Acreage, but the morning went quickly because we didn’t stop.

Inside, I had Madame IP cook the potatoes I needed for my salad last night but should have mashed them when they were warm. Duh. I love the steam (reheat) option on my IP so used that for 10 minutes to warm them up. I also boiled 3 eggs in the unit and chopped them and onions to go in my salad. Oh, I also moved Gibbs' crate upstairs and cleared the couch off in case we sat inside to eat.


At 11am, Bill’s 3rd oldest daughter, Krystal, came with her fiancé, Matt, for a couple of hours. It was so nice to see them both, happy couples in love make me smile, a lot. We had a nice visit on the patio in the shade and when they were ready to leave, Krystal paid me for the hedge trimmer she'd requested from us earlier. 😊 I’m glad they will be able to use it and it is lightweight for her to handle. We caught up on their wedding plans, some of which still remain sketchy, only because of Covid restrictions. When they left, I knew Bill wouldn’t be hungry as he’d had toast earlier but I was so I had a hardboiled egg and some cheese with my coffee to tie me over.

The ‘boys’ went up for their snooze and then outside to wait for company, leaving me to finish prepping. Bill’s 2 sisters and their spouses were coming. I pulled the dishes, silverware and condiments out that we’d need for our meal so I didn’t have to do that when the family was here. I am definitely a pre-planner. It’s easier on me plus nice to visit before we start our meal prep. It was just around 2 when Gibbs started barking and Bill called in that they were here. Carol and Brian arrived first in their Canada Day hats and shirts and I was glad that I wore my Canada Day shirt too. A little bit of Patriotic spirit!

Liz and Bruce weren’t far behind, minutes actually, and there were a lot of oohs and aahs, some videos and pictures taken of Gibbs' new cousin. Gracee, Carol and Brian’s 7-month old Wheaten Terrier had the exact same colouring as our Giblet. 😊 One of many nick names for our little guy.

Their faces are very different but the joy was in watching them both unite with each other in true puppy fashion. I took so many pictures! They got along so well, even in their ‘rough-housing’, and their nips were gentle ones. Even though he ended up under her, Gibbs half the size of Gracee, kept going back for more which was endearing.

We sat outside in the sun and shade, with Caesars and rum drinks moving to where we were most comfortable as the sun shifted. Great conversations and bouts of laughter are typical of these gatherings and we're so grateful that they don't mind the drive from Stratford area. 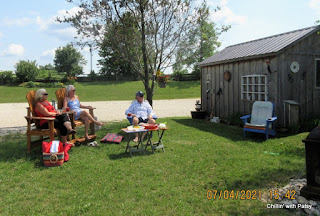 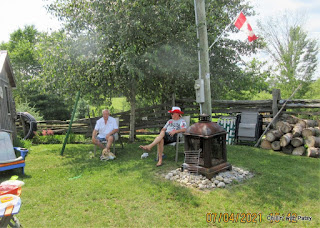 At 5:30 Bill started grilling the precooked Knackwurst and I pulled the wine and the salads out of the fridge. Carol also brought a delicious cauliflower/broccoli salad which I keep saying I want to make but keep forgetting. I’ll get the recipe from her. I think Donna and Bridgette make a similar one. The knackwursts and my salad were also very tasty. I’ll make that recipe for salad again.

For dessert, I just served Foodland’s small raspberry delights, can’t remember what they’re called but it was just enough and we all enjoyed them.

Of course, before everyone left, I had to get my tripod and big Canon camera out for our traditional photo. Holding the dogs made for some laughter, trying to keep them still while I set up the self-timer and run to get in the picture. Gracee did well but Gibbs – not so much. 😊 We’ve had only one bad weather day for our dinners up here and today was another awesome one. It didn’t even matter that it wasn’t on July 1st. 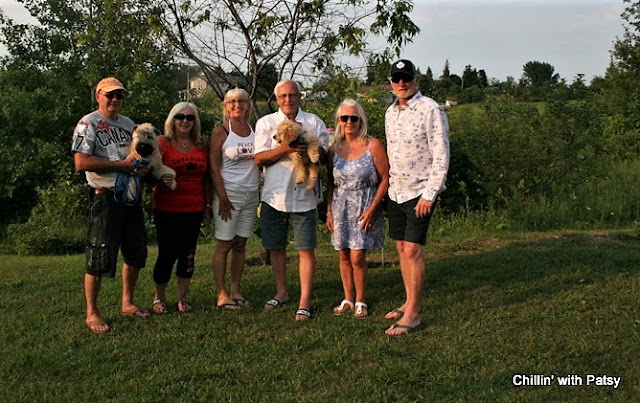 I put things in the dishwasher and when Bill came in, we just relaxed in front of the tv until bedtime. Gibbs was so good with his new pal and we are pleased to be able to introduce him to other dogs. This was his first ‘real’ encounter and it went well. We were also happy to hear similar stories from C & B about Gracee of what we’re experiencing with Gibbs. It makes us feel we’re all on the right track. I loved this day!PS, I really enjoyed my Orange Mimosa and will stock up on more next time I'm at the LCBO.

I hope your Sunday was just as awesome! Happy 4th of July to our American friends!! Thank  y'all for popping by.