On Wednesday, July 14th, we were back to a regular day. Bill was up at 6, Gibbs joined me in bed soon after and we both watched as ‘Daddy’ left for work around 7. He was driving himself and meeting Billy at the lakeside cottage today. Gibbs and I came inside and because it was spitting lightly, I made my tea instead of going for a walk. I sat with our pooch for a while in my chair and also did some online surfing.

I’ve done much better this month with my data usage. Last month by this time, I’d already used my 10 gb allotment! It all comes down to the videos in emails plus the time it takes me to download pictures to my blog. I’ve been very choosey which ones I open now and how much time they take. As of today, I’m just over 4.4 gb so I’m happy about that. It is unlimited but it slows down a lot after 10 used.

Since Bill had our bloodwork done on Friday, we have had to do the fecal occult test. I’m pretty sure most of us, you, have done these and they are the worst part of our yearly physicals. Well, because we haven’t had a physical in 3+ years, we weren’t surprised at all to have to do the 3-day test. Today, I was going to Hanover to pick up a few groceries and dropping off the envelopes at the Medical Centre.

There was no rush to go and since I was waiting for our Cub Cadet to be delivered, I hung around until 10. It still wasn’t here so I called Mary at NLS and asked if she knew when to expect it and did I have to be home. With her answer that it wasn’t necessary for me to be here, I left after putting Gibbs in his crate. He wasn’t happy at all with that but at least I knew he’d settle down and he was safe. He’s doing well without his water dish in there but drinks a lot when he is free again. 😊

I dropped off our samples and went to Grant’s Independent Grocer for my 11% Oikos yogourt and also picked up some medium ground beef for supper tonight. I don’t like the lean; the fattier the better! From there, I went to Walmart and picked up a few more things. When they didn’t have apple cider vinegar, I called Giant Tiger to see if they had it. Nope, out of stock. I called Foodland in Durham and they had it on the shelf. Perfect.

That was my last stop and I picked up 2 litre bottles. I wouldn’t need both for the rags/skunk but it doesn’t hurt to have it on hand. I used to always have both white and apple cider vinegars in the cupboard. Gibbs was quiet when I got home, of course, laying down as he should be. I noticed the truck from North Line Services drive by as I turned in the lane. Hmmm, so half expected to see our mower when I got up here. Nope, not yet. 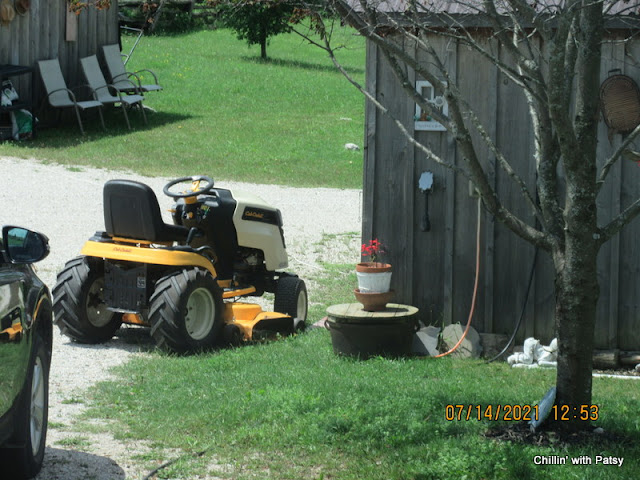 As I was unloading, they pulled in with our C.C. in the cargo trailer. I was surprised to see our neighbour, to the west, and his wife, dropping it off. So, he works for NLS. That would be a nice part time job for Bill! Our neighbour isn’t very chatty with me but his wife came over to meet Gibbs before they scooted out the lane. Bill will be happy to hop on and cut grass, if he’s up to it, tonight.

We came inside and I checked with our friends who had their 2nd shot yesterday. They and M had different outcomes but nothing serious, just feeling tired, headache and a bit of a sore arm. M said he was fine today but had a restless night trying to sleep on his arm. I’m glad to hear they are all okay. I printed off my LifeLab reports from our tests and then instead of working on the cross stitch today, I read in between watching the last episode of Why Women Kill. 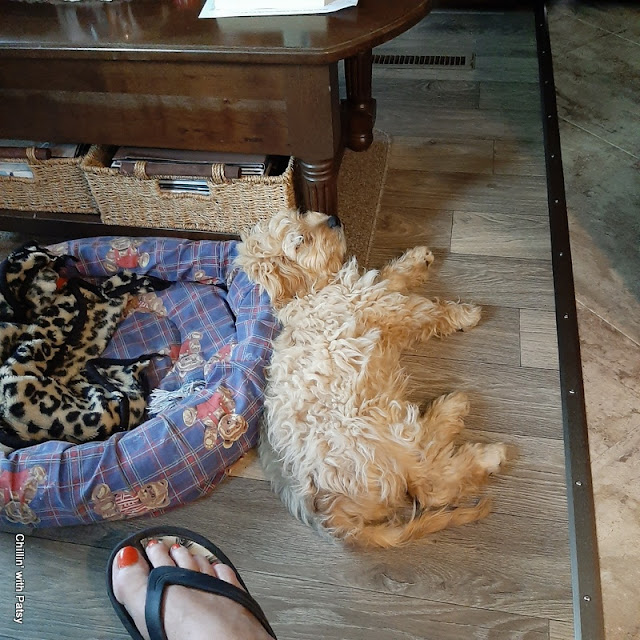 Bill came in around 4:30 after I’d made my tea. By then I’d moved on to watching some oldies from the 70’s (Little House on the Prairie) and the 80’s (Highway to Heaven). He watched the last 15 minutes of one with me and then we switched it to NCIS. He dozed, Gibbs dozed too and I started supper at 5:30. Spaghetti with noodles for Bill and spaghetti squash noodles for me. It was quite tasty, it has been a while since we’ve had it.

We didn’t need much for dessert but a small ice cream cone did the trick. We haven’t had ice cream for a while either. 😊 Bill went out to cut grass but someone left the key on and the battery was dead. There’s only ONE someone to blame and that’s me, from trying to move it away from the Bunky. Some days my blonde shows with a vengeance! I felt bad but was forgiven quickly after it charged up in minutes.

Gibbs was a nuisance for about an hour before and after his supper, wanting out but not doing much. The little teeny bugs had me itching and scratching the whole way down the lane and back. Bill got the berm, front patio area, the corral and was down in the front field when I finally had to get inside. Gibbs wanted to stay out so I made sure he had water and left him tethered to the rope at the steps. He was happy.

Inside I soaked some rags in apple cider vinegar and put them in a bag with holes. I’m hoping Bill won’t mind shoving the bag into the hole under the shed. The odor is supposed to be a repellant for them but how we know if it works, I don’t know! LOL So many tips online and until we can get a live trap (if Bill wants to do that), we’ll try some of them. I stayed inside for the remainder of the evening and tried to eliminate the house flies that come in every time we open the door. ☹

This was a good day although I didn’t get much done. I guess that isn’t always a prerequisite. I hope yours was a good one too.

Email ThisBlogThis!Share to TwitterShare to FacebookShare to Pinterest
Labels: hanging out on a hot day
Location: Priceville, ON N0C 1K0, Canada