A Miserable Day Out There

Saturday, July 24th was our sleep-in day. I didn’t have to go anywhere at any given time and when we saw the way the day looked (it was forecast to rain most of the day) outside plans weren’t going to be forming anyway. We got up just before 8 and had our morning brew together. I got washed up and made a run into Hanover just as the rain drops began, lightly at first.

I had something to return to Walmart and I wanted to print off some photos from a USB stick. This is still working towards a creativity class for Ladyfest. 😊 I didn’t have a lot of luck, since the photo kiosks don’t print in matte/satin finish. The gal at Walmart told me I could choose on the kiosk but $15 later I found out that she was new and didn’t know that it was only available on the 1-hour service. LOL Oh well. I’ll have to send them by email to the artist.

When I’d picked up the groceries we needed, and some I wanted, I stepped out to pouring rain. I ran between the drops (haha) and was pretty wet by the time I sat in my seat. Yeuch! It was warm though so a mild rain didn’t give me the chills at least. Back home, it was still raining but not as hard so I got the bags in the house easily enough. Bill said Gibbs whined a lot when I left and sat at the door so I figure he just likes to see us drive away and then seems content. Bill thinks he’s a Momma’s boy. 😊 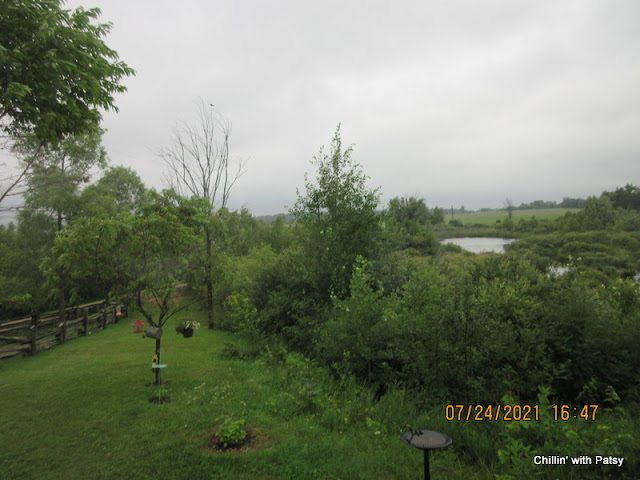 The rest of the day was the pits. Bill couldn’t work outside and there wasn’t much I could do inside so we ended up watching tv and I placed my last Avon order. I think. The shipping fees for me, even a representative, are ridiculous and Bill and I concluded that we don’t use that many of their products now anyway. I do have a lot of stock on hand for what I use so I think it is the right decision.

Bill watched a movie downstairs and I went upstairs to find something of my own. Because of the rain, I kept losing the satellite connection so that was a dud. I tried putting a movie in but couldn’t figure the dvd player out either, brain dead! I just rested with Gibbs, played some games on my phone and when the Shaw connection returned, I managed to watch a few episodes of The Paranormal. That was an eye-opener!

Downstairs at 4:30, I had a cup of tea and I made a meatloaf for supper. There was some potato salad left for Bill and I cooked some veggies and a spaghetti squash portion for me. That would be plenty. Gibbs was very sleepy today and when he had to go out, once he got quite wet. Nothing like a little pup piddling and looking up at you as the rain fell on him. ☹ The other time was in between the rain so although he was timid at first, realized that he could do his business quickly and get back inside. Too cute!

Supper was good but after I filled my plate, I just didn’t feel that hungry. I guess I haven’t exerted myself enough today! So, I ate half and saved the rest for another day. I feel fine so it isn’t that I’m out of sorts and I certainly won’t starve! We took care of dishes and Marilynne called to check on us before 7 when she heard about tornado watches in our Grey Bruce area. So far, the winds haven’t been anything out of the ordinary but we’ll keep an eye on it.

All we’re seeing now is warnings for thunderstorms to last into the wee hours of the morning. This was a lazy day because we didn’t have a lot of choice. It hasn't stopped raining for the most part of the day since it started at 10. I hope you are safe where you are.

Thanks for stopping in.

Posted by Patsy Irene (Chillin' with Patsy) at 5:52 PM