We slept in on Saturday, July 3rd. Why the heck not? Bill was up at 6 and brought Gibbs back up to bed when he returned. It was 7:30 when we, as a family, got up. I had laundry to do and a laundromat to clean. We also needed a few more groceries, things we didn’t want or need in bulk so after doing everything at the Mat, I went to Foodland and then to the LCBO for a couple (or 4) bottles of wine.

I’m not a big wine drinker and we’ve asked our guests to byob anyway. However, we always like to have a couple of bottles on hand. It always works out and this time I actually picked up 2 bottles of Orange Mimosa for me. I get tired of the same thing and Vodka and gingerale hasn’t been turning my crank. That’s very important, when you only have one drink, it has to turn your crank! 😊

While in the grocery store, I made the snap decision to buy something dessert-ish rather than put myself in the position to make anything. Time to make it easier for myself. If we hadn’t had a full day away yesterday, we would have done the things we’re doing today – then – and I would have felt more like baking today. So, I picked up something that will be a half decent ending to our meal.

Bill went out and did some weed eating while I was gone and when I returned home, I had my tea and then hung the laundry. The day was already warming up quite nicely after a bit of a cool start. It got down to 10C/45F overnight and I turned the fireplace on to take the chill out. I had things I wanted to do today so left Bill on his own to do his trimming and Gibbs out on his rope leash, out of the way. I wanted to test my new Norwex mop system.

I used the dry mop first and quickly cleaned the dirty floors. With the rubber brush, it was so easy cleaning the pad, scraping it into the garbage bin. 😊 Then, I dampened the wet pad and lickety-split took care of washing the floors. Like I saw in the videos, I’m sure I was smiling with the ease of the whole process. I rinsed the pad out and hung it on the line as well. Bill chuckled at my exuberance when I later told him.

We had brunch at 12:30ish and then while he worked on prepping the area for the new oven, went upstairs and cleaned off our dresser top. It was dusty and quite the conglomerate of ‘unnecessary things’. It looks much better now and I’m grateful Bill suggested I ‘do something’ with it. A nudge never hurts and I’d been thinking the same thing. I found the Funky Monkey from a drink Pat and I had on Beale St. in Memphis, TN so had to text her and let her know she was in my thoughts.

After dishes, and Bill doing his best to get things ready, he called Gerry for a helping hand lifting the oven. Yay! With his help, I can step back and let them at it.  😊 Bill says this one does not feel as heavy as the old one, he brought it in by himself. Now, at 5, it is a spicy 24C/75F with hardly any breeze, meaning hotter than what our thermometer says. No complaints, it’s lovely except inside the Suite if you are lifting an oven!


Donna and Gerry arrived by 5:30 and with a little bit of jiggling, they had the appliance in place in no time. 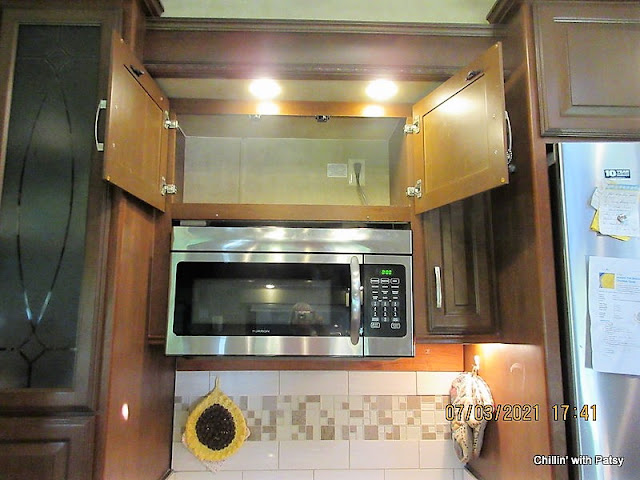 Time for a beer! We sat out in the half shade/half sun and watched Gibbs run around like a little fool. Mind you, we all had to watch our bare legs when he tried to jump up on us. Those claws are a killer! He gets so excited with other people and sometimes with us, we can only hope our attentiveness pays off and it stops.

After they left, our little guy took off down the lane after them. I had gone up to bring the clothes in and Bill was trying to clean up the boxes outside and start a fire to burn the cardboard. After running down the corral hill as well, we had to trick him to get him back on his leash. He was too worked up to leave him run free. I brought the clothes inside and we got supper started. Fish and chips tonight and we were eating around 7:30.

D & G invited us over for a fire but for tonight, we declined. It would have been a lovely evening, calm and warm but we’ve had another busy day. I’m thrilled to have our new microwave/convection oven in place but we agree that it needs to have a minor adjustment to level it. It looks good with a new set of buttons on the control panel to get used to. 😊 This one also allows combination cooking as well as microwave and convection cooking.

After dishes, Bill had his shower and I took Gibbs outside. We sat on the steps for about 20 minutes while I had potatoes cooking in Madame IP. I’ll be making a potato salad for tomorrow so wanted to have it started tonight. I needed to put on my Pedicurist cap and trim Bill’s toenails for him. Things like that (for my own hubby) don’t bother me although I know many wives shudder at the ordeal.

Bill and Gibbs sat together once the potatoes were done and I went up for my shower. This was a great day even though another busy one. We are looking forward to celebrating Canada Day tomorrow with Bill’s family. It doesn’t matter that we are a couple of days late. 😊

Posted by Patsy Irene (Chillin' with Patsy) at 8:49 AM