On Tuesday, July 13th, Bill was able to sleep in a bit longer. They were going back to Meaford to the pizza place so Billy was picking him up today. It was around 7, I think, when I got up and got ready for work too. I fed Gibbs early and took him out before I put him in his crate. Bill was still outside waiting for his ride when I left. I met Billy at the end of the lane, said Good Morning and we went on our way.

The Mat was not bad and didn’t take any more time than my usual hour to tidy things up. The sky was cloudy when I left home and in town, but within half hour, the sky opened up and we got a nice shower. It was still raining lightly for my drive home but stopped soon after. It felt humid again this morning and rain is forecasted on and off all day. I guess I won’t be weeding/edging today. Or will I? 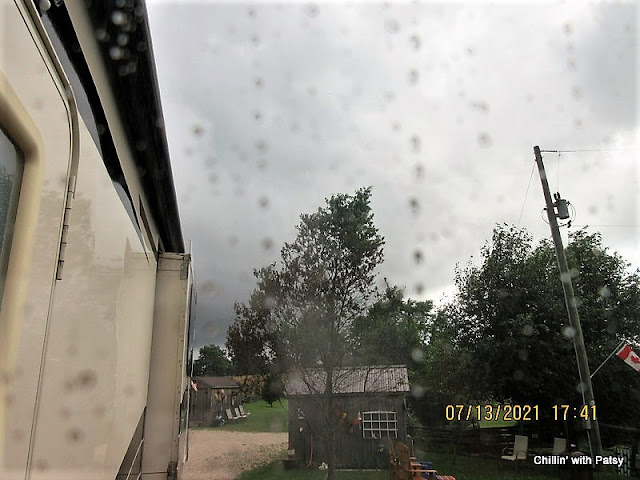 After having my tea at home with Gibbs, the rain had stopped and seemed like perhaps it would clear. I put him on his rope leash and worked on the small garden right off the patio. This one never looks as good as I wish it would. I edged, moving around on a pillow, removing more grass and dirt. Maybe it at least has straighter lines now. 😊 Bill surprised Gibbs and I when he and Billy pulled in just after lunch, finished what they had to do at that job.

The rain had us all bustling inside and then while they went up for a snooze, I went back out in sunshine. LOL What a funny day! I managed to finish the garden and around a few of the other plants. The hibiscus, which sure isn’t doing much, and my flowering raspberry ‘stick with leaves’ have been tidied up as well as a couple of the small trees. It doesn’t look so great now because our grass is so long but it will. The mower should be home tomorrow so Bill can take care of the cutting.

I came inside and Bill and I printed off our Covid vaccine information to keep with us when we head south. It is the only proof we have, at least hard copy proof, that we were double vaccinated. I’d eaten a keto pumpkin muffin earlier with some cream cheese but now, at 2, felt hungry again. I know, our eating habits suck!! ☹ We had some cheddar, Bill had his with crackers, and that will tie us over until supper time.

Feeling tired, just as the sun came out and the sky broke up overhead, I went to my recliner. I wanted to get back into my book, after a few days of neglect, but my eyes were also heavy. I read a few chapters and then closed my eyes for a wee doze. Bill took the opportunity to go down to the Hangar for about an hour or so. Another neglected spot. I easily got back into my story and when he came up around 5, we watched some NCIS before I started supper.

Spiced skinless, boneless chicken thighs in Rosy tonight. I had white rice to reheat so added some butter to do that and cooked our individual choice of veggies in the microwave. I’m getting used to the new settings and I’m liking our new oven more and more all the time. There are some options I still miss, like ‘soften’ and ‘melt’ but I can live without those buttons and learn, instead, the time it takes for each.

Supper was good and we were eating by 6:15. Gibbs has it down to a science, that he needs to go out and rings the bell just as our plates are set on the table. One of us has to accept the job so tonight, I covered my plate of hot food, and took him out for a quickie. 😉 No sooner did we set foot back inside and the sky opened up so I was grateful for that timing after all! It felt warm inside so we are happy to have the majority of our windows of the slant variety. No rain comes in but the fresh air does.

We finished off the peanut butter pie, I’m sad for that, but they were big pieces and if I wasn’t such a piggie, would have cut them in half for one more night. Nope! It’s a keto pie after all so no harm in big pieces. 😊 After dishes, Bill had his shower and in between bouts of rain, which made our satellite service disappear occasionally, we watched tv and spent a quiet evening together. Depending on what he watched, my book was either open or closed.

The option of watching something upstairs was there for me but I do like spending as much time as possible with my sweetie. This was a good day with my morning job done and more work outside on the gardens. Still more awaits so we’ll see what the weather brings tomorrow. No more skunk sightings but just knowing they are ‘present’ is enough to tick us off. Might have to borrow Gerry’s live trap on the weekend. Another suggestion is apple cider vinegar-soaked rags to encourage them to move on. We’ll see.

Thank you for taking the time to see what we’re up to.