On the Move on Hump Day, A Walk with Gibbs

Wednesday, July 21st we woke up from another good sleep with Gibbs. He has the hang of it now. I got up after Bill with him and took him out. The air felt cool this morning, quite a change from the last few mornings. 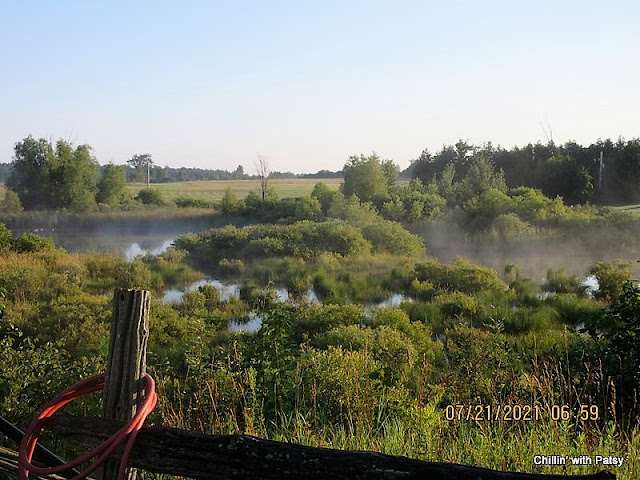 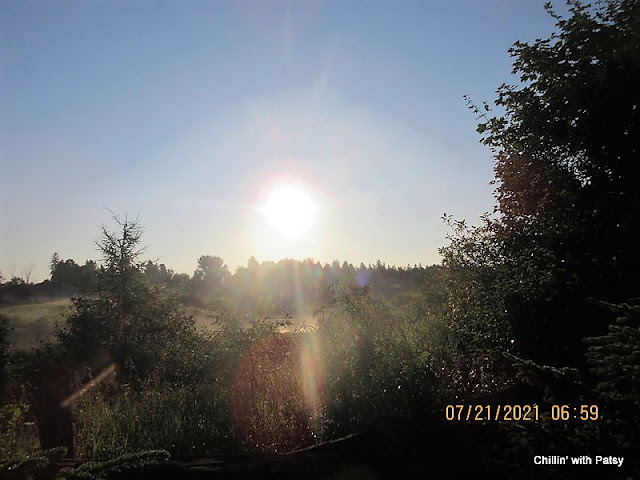 No wonder I felt a bit chilly through the wee morning hours, my little window was open all night and I didn’t realize it. Many of you leave windows open at night for sleeping but this one beside me blows directly on my head so I’m particular when it is raised. Last night I forgot it and with the blinds down, didn't notice.😊

I got washed and dressed for the Mat but had my tea here at home first. I wanted to relax with Gibbs until 8ish before leaving as he would be spending a few hours in his crate today. I fed him his breakfast and he gobbled it up and instead of rushing to the door to ring the bell, he relaxed too. At one point, he went up the two steps and fell asleep on the carpeted stair. Too cute!! I had to take a picture and send it to Bill.

We’ve said often that Gibbs has some of Clemmy’s spirit in him with his actions but we also are quick to see that Clemson had his sweet ways and Gibbs also is adapting his own sweetness. We are so lucky; two little lovebugs came into our lives. 🐶🐶 When it was time, he went in his crate with a treat and I drove to town. The air outside was definitely cooler, so I wore a light sweater. It came off as soon as I arrived, but the Mat wasn’t too bad today for cleaning.

The floor was a mess with those stupid Downy Unstoppable beads! I knew before I even started my routine (recyclables, washroom, dryer lint, washers, mop floors, damp mop floors) that they needed to be swept before I or someone else came in and stepped on them, crushing them into the floor. I got the broom and realized that I was too late for many but got most of them cleaned up. Out of the norm, I finished the whole floor except in front of the dryers.

With the jobs done, I finished sweeping and mopped the floors. It’s looking spiffy again although there are still some of those beads ground into the tile that I had to get down and scrub the old-fashioned way. Grrr. I do hate the stupid things! I knew Gibbs was safe at home so I drove further to Hanover. There were a few stops I needed to make.

First, Dollarama for a canvas board for Ladyfest and some things for Gibbs. A leash, a collapsible food dish and a couple of different (good Canadian or American) treats. I also found Niger seed for the finches there at a great price. Then I took the road out of town to see the cottage that Bill and Billy have been working on. It is a lovely little 2-bedroom place that is sure looking great with all the touchups! Billy and Mike had done previous work there so everything looked new. With a view out back of the lake, I drooled a bit until I saw all the cedar trees. Cedar trees mean mosquitoes to me. ☹ 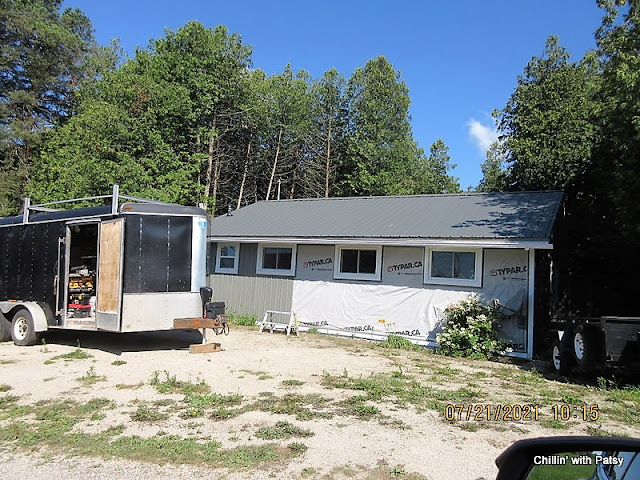 From there, I drove back in to Walmart and got the food items we needed plus a new bed for our little guy. He has been pulling the innards out of Clemson’s old bed so it was time for his very own.

Back home, M called and asked if I could work a few hours on Friday so that will give me a bit more cash for next week. I would never say no after such a long time off! I was hungry so had some soup for lunch and decided to make a potato salad that will do for a couple of nights’ suppers.

Gibbs liked the little plush bone that came with his bed and I’m sure he’ll grow to like his bed too. A couple of times, he went upstairs (not true, it was a handful of times) to the bedroom and when I’d check on him, he was indicating that he wanted to go up on the bed. I’d love to accommodate him but I’m hoping he’ll do that with Bill when he gets home. I cleaned up the dishes and started my blog post.

Around 4, Gibbs and I walked down to the mailbox and I think I might be on to something with this harness/leash. Just going down the lane for now but he can’t grab the leash as easily and walks better. I got the mail, oh no! Another catalogue from Atlas for Men! 😊 Actually, I love the clothes for Bill and I love to see him broadening out in his styles and colours. Yes, I’m encouraging him to buy whatever he wants!

At the end of the lane, we turned west and walked along the grassy edge as far as the gate to our front field. Gibbs was confused, kept looking back, as we’ve only gone that far from home a couple of times.


When we got into the field, I dropped the leash and let him go. My eyes got teary as I watched Clemson’s spirit take over. 😉 Gibbs ran a few feet, stopped, checked that I was coming and ran again all the way across to the lane. So sweet!

We sat outside and around 4:30 I started moving the lawn furniture to the patio. Bill wants to cut grass tonight and this is where he starts. Within 10 minutes, he was home. After he changed, he hopped on the mower and started. Inside, I’d prepped the pork ribs with a spice rub and started them in Madame IP. By the time Bill finished the berm and around the Hangar, I was ready to put the ribs on the grill mat on the Weber.

The ribs were perfectly cooked, fall off the bone tender. Bill wasn't as keen on them as I was but agreed they were okay. The salad was another good turnout. Bill wanted to finish the cutting tonight so I offered to do the dishes so he could get out there. It was around 7:15 when he went out to do both fields. The sky was a beautiful blue, clear as a bell.

Gibbs is moving around inside from his new bed to under the table with a new soft toy and then to his new blanket. He has been outside a lot this afternoon, with or without me, on his rope. He was so tired that when Bill went up for his snooze at 4:30, Gibbs went with him and they slept for a nice long time. 😊 We’ve had a really nice day. I hope you have too. 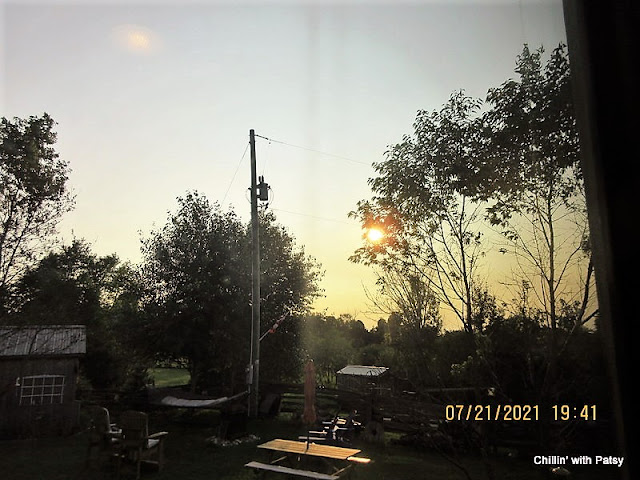 Thank you for your visit on this hump day.

Posted by Patsy Irene (Chillin' with Patsy) at 7:37 PM