A Family Birthday, A Family Visit, A Family Campfire?

On Saturday, Sept. 11th, my youngest child turned 42. Yup, I don’t even know how this happens! Patrick and I have had a wonderful relationship all during his lifetime. A minor bump during his late teens, but we moved ahead and I’m so proud of the young man he has become. He has created a little family of his own and he and his wife have made a great home environment for my grandson. What’s better than having children you can boast about? 😊 Last night, I went to bed thinking that I must call him in the morning.

My morning was go-go-go right from the moment we got up around 7:30. Bill and I sorted laundry and I headed into Durham before 8. The Mat was a mess, the floor in particular. It was such that I had to grab the broom and dustpan before I could even work in it. Bags of discarded food and containers in the recycle bin had quite a few flies buzzing around it. That was my first clue.

The bathroom cupboard was yanked out – again – and the children’s clothing in the Lost and Found that I’d neatly folded and bagged on Thursday, was out of the bag and all jumbled again. Grrr. I refolded them and put the bag in the back of the car with the other bag for drop off. Our 2 loads of laundry were done within 30 minutes and I finished cleaning with a good damp mopping of the floors. I was happy to get out of there, my temperature was rising.

I needed to stop at Foodland to pick up some buns or nice bread for lunch today and also got some sour cream and yogourt as well. The yogourt was the 10% Liberte plain Greek and was on sale. Donna was bringing me some of the Oikos 11% from Independent but because of the maturity date, they will both get eaten in record time. 😊 I love them both pretty much equally. Back home, I set about hanging the clothes and in my haste, didn’t even notice that Bill had cut the lawn.

I would have noticed later, but when he asked, I had to admit to being clueless. On my mind, was the Instant Pot of chili that I needed to make and have ready before noon hour. Bill’s youngest daughter, Jess, Matt, Easton and Hadley were coming for lunch and a visit. We love their  interest to come and see us on a pretty regular basis. It isn’t far, about an hour and a half from Stratford and nice for them to get away, out of their apartment for a few hours.

They arrived around 11:30 and of course Gibbs got very excited. It was a bit of a challenge for us, keeping him at arm’s length from the two little ones. Hadley has just turned 8 months old and is very good on a blanket on the grass. Easton is 2 and a going concern. All Gibbs wants to do is get near them, for licks and possibly nips and that’s a no-no. The day was going to be warm and without the winds, it would have a ‘sit in the shade’ kind of day. As it was, we sat in and enjoyed the sun.

I made mac and cheese for Easton but he really doesn’t eat much. Times have changed! He gets enough snacks to keep him going, I guess. The bread I got at Foodland was delicious! It was fresh baked yesterday so that was a good purchase. I’d also picked up their homemade shortbread cookies too. They were also very good. We ate inside, mostly because of the wind, and had Gibbs outside on his tether so as not to be a nuisance. 😊 He was very good.

Before the kids left, I managed to get a family ‘portrait’ for our wall. That will be Bill’s side done. I’m still waiting for my two to send me theirs. It’s harder for Bridgette since she doesn’t see Taylor and Jake as often during this crazy time. One day, I will have them both. Jess’s family left around 2:30 after a nice visit. It is always great to see them. I brought the clothes in off the line but had to fold them inside because the winds were crazy!

Supper will be easy, chili and bread, and we hope the winds die down and the rain holds off so we can entertain with a campfire tonight. It’s our turn and we’ve invited Donna and Gerry over to join us. Also, Mike, if he happens to be out. There won’t be many good nights left after this month so want to take advantage and get some things burned at the same time. Having ‘little people’ visitors tires us out, so I wasn’t surprised when Bill and Gibbs both curled up for their snooze. 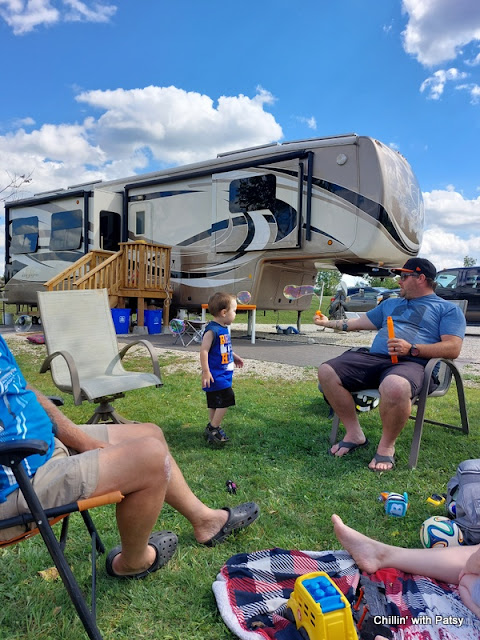 I don’t feel like I’ve stopped all day until now so soon moved to my chair with my book. Usually, that helps put me in a slumber too. I warmed the chili around 6:30 and when we were done cleaning up, Bill started the fire. It was still very windy, gusts between 17 – 20 kph but it was a mild night regardless. I told Donna we were going to try and they joined us around 7:30. It was nice that our friend, Bill’s boss, came along too. 😊

The winds never abated but we enjoyed the ambience of the outdoor campfire and the company until 10 when they said goodnight. It's crazy how dark it is now at 8:30 and up here with no street lights, pure black.

Bill and Gerry walked around the property and as always, Gerry was impressed with our efforts at making the place look nice. As he said, it would be a great spot to have a small bungalow so we just need to win the lottery BIG to buy it! Ha ha, pipe dreams are fun. 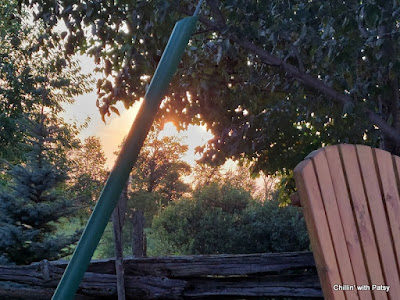 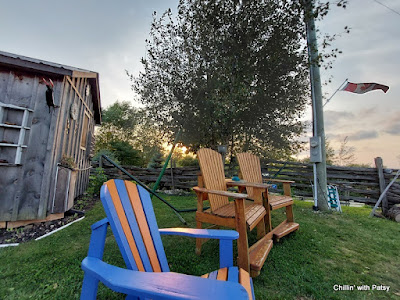 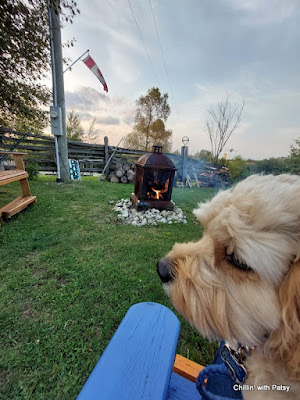 We watched a bit of tv inside before I had to go to bed. A boring movie that I’ve seen before and my eyes would not stay open. This was a wonderful day! 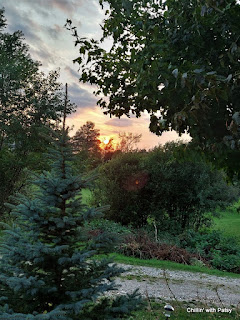 Posted by Patsy Irene (Chillin' with Patsy) at 8:47 AM