Lane Clean Up, New Baby, Enjoying our Day Off

On Thursday, Sept. 2nd, Bill didn’t hear from Mike and knowing that Billy, his co-worker, was off for the day, he got up with me around 7:15 or so. We welcome every day off that bill gets now, with the decision made to cease the heavy labour soon. Gibbs and I went for a walk in the chill of the morning. I’m not kidding, it was only 12C/53F and I was in shorts with my fleece top. The change was too sudden, I wasn't ready.

Gibbs wanted to play in the ditches more than walk today, so I let him have his fun and we turned around at the auto shop. The sun had risen this morning into a clear blue sky, which helped a lot. 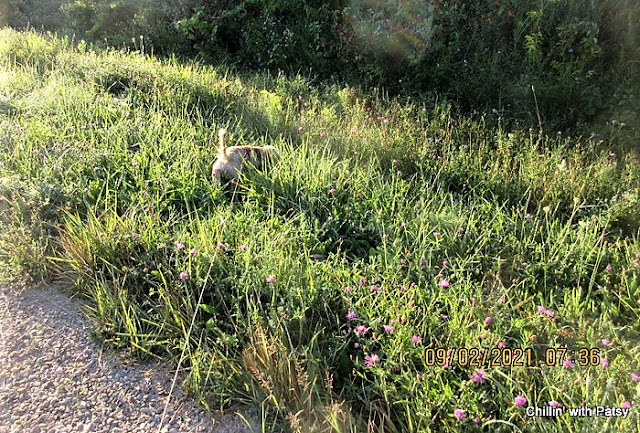 Reaching the forecasted 21C/69F would be a stretch the way it felt right now. It wasn’t going to be a very warm day but on the other hand, it would be a good day to do some physical work outside.

While I drank my tea, Bill went out and got the weed eater to start trimming.

He was still at it by the time I finished so I left Gibbs inside and took Black Beauty down the lane to pick up the vines I’d pulled the other day. I drove BB up the hill and ‘tossed’ (that makes it sound easier than it was) the truckload into the brush pile. The way they tangle with each other and around my legs, made me very careful that I didn’t end up in the pile myself!

Bill was still trimming, so, I took the shovel and rake and picked up the large and small rocks at the bottom of the corral hill. They were left over from Bill digging the trench for his black water pipe. It has been too hot to be bending over numerous times to clear them. We agreed to just toss them in the point (V) of the corral as eventually, we will be changing that area and adding a load of gravel. A few more stones will only be welcome. 😊

When I was done doing that, I was done for the day so I sat with Gibbs at the picnic table. He played, kept an eye on his Daddy and I read my book. It was almost too cool to sit out unless you were in jeans and long sleeves so I’d changed into exactly those clothing items. At 3, I went around the corner to run some errands in town for M. He’d had too many beers to be driving so I was happy to give up an hour and help him out. Bill went down to the Hangar and puttered with his models for a few hours before supper.

M also showed me the skunk that he’d trapped out the back of his shop. I wonder if that is the same one we had over here? No matter, he isn’t our problem anymore. When I returned home at 4, I had my afternoon tea. Then I continued working on my cross stitch. I felt that I made really good progress today, actually seeing the difference, where often I can’t tell where I’d worked.

For supper, I plugged us in (that’s 2 days’ worth of savings on electric) and cooked 4 chicken thighs in Rosy, the air fryer. Skipping the potatoes for the night, I made a box of mac and cheese and cooked some mixed vegetables to share. It was good, the thighs were done to perfection. I think that is my favourite way to cook them. After dishes, we watched some more recent NCIS reruns and took turns taking Gibbs out for his runs. He seems to get renewed energy in the evenings.

I try not to laugh at him when I’m trying to be serious and get him to come to me so we can return inside. My mistake by dropping the leash, but I do want him to tire himself out. He has fun and eventually I can trick him enough to get him indoors. The day was a really good one and things got done. By 8:30, clouds had moved in pushing that lovely sky down to sit on the edge of the horizon. We’re still looking for a cool night/early morning.

We heard the good news this morning that Billy and Stacy had their new baby boy arrive around 9 am. I was thrilled when Billy sent me a family picture. Well, part of the family at least with the new arrival. His name is River and he weighed 7 lb. 8 oz. Both Mom and babe are doing fine. 😊 Congratulations!

Thank you for stopping by to see what we’ve been up to.