On Sunday, Sept. 12th we slept in until 8 or was it 8:30? Who knows? Who cares? 😊 We had our morning brew and wondered what the day would bring. It was cloudy but there was a bit of hope that the sun might make an appearance. Bill checked the forecast on his phone for rain. He would have liked to have gone flying at the Hanover club but we couldn’t count on it staying dry. No flying today.

Online, I ordered something we agreed on for a wedding gift for the soon-to-be newlyweds and when informed that it was ready for pickup, made plans to drive to Hanover this afternoon. I had some shower gifts to pick up from Walmart so that would work out well. Bill had some toast from the homemade bread I got at Foodland. He wouldn’t need lunch but I made a breakfast casserole in Madame IP anyway. He suggested it for supper so we’ll give it a try. I, then, had toast as well.

Black Beauty needed fuel so we left Ptooties at home. We were in and out of the two stores, the gas station and on our way home within the hour. Because it turned into such a nice afternoon, with only a spattering of rain around 10:30, we changed into bike gear and went for a ride. That was another great ride even though it was just shy of 90 minutes. Gibbs looked after the house for us both times and did a great job!

I made myself a tea and Bill sat in front of one of his recorded movies. I don’t say he ‘watched’ it because he couldn’t keep his eyes open. I cashed in my Lotto 649 ticket yesterday and was surprised that it was a $10 win. Bill checked my next ticket for me earlier and I won a free ticket plus $2 on the Encore. Seems like I’m on a slow roll but still a roll! 😊

At 5:30, I turned the casserole on to cook. It was pretty simple to make so if we don’t mind breakfast for supper, we’re set. This afternoon, Jamie and Cheryl (& Morgan their lab) dropped over to pay me for the month of August. He's been unavailable for a couple of weeks but is very prompt, paying me as soon as he could. It was nice to catch up with the two of them, and hearing that Emma is doing well at school in Pennsylvania. 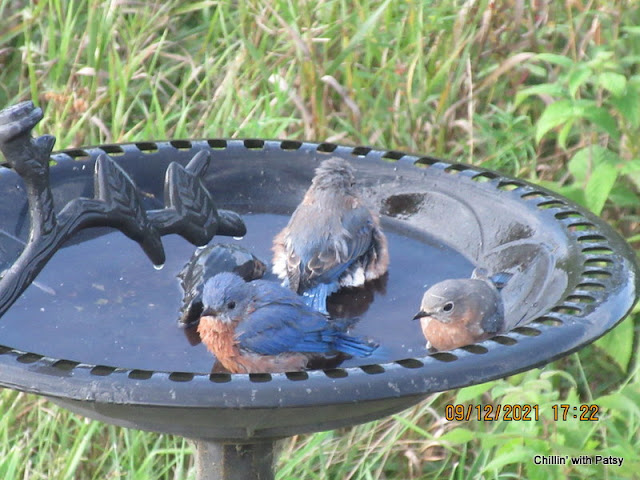 Our supper was quite good. The casserole was light and fluffy with the 6 eggs and heavy cream. Yum. With a Foodland bun each, we enjoyed this untraditional meal for supper. There was cheesecake left so we had a piece of that with cherry sauce. I was quite full. We did the few dishes and went our separate ways. 😊 That sounds ominous but it only means that I moved upstairs with my laptop and turned on an old movie, The Pelican Brief, and Bill watched something he likes downstairs. I love having two tv’s.

It was a good day and I’m so glad we got out for another ride. Our days are numbered for the weather that allows us to do so.


Thank you for stopping in.