On Tuesday, Sept. 7th, I was awake a couple of times through the wee hours, lastly dropping off at 5:30 into a deep sleep. When I next woke and looked at the clock, it was 7:30! That 2 hours went by in a blink. Bill had a text from his boss last night that they wouldn’t be starting the job down the road today so he got another day off. It’s good in one way but it also means a small paycheck again. 😊 I told Bill it was just gearing us down to what will be, come October.

I took a tea into Durham, cleaned the Mat and then drove to Hanover. We had built up quite a grocery list so I picked those things up at Walmart. Apparently, I was brain dead again though. I meant to go further down the street to the Independent Grocers to get my yogourt and completely forgot that. Not everyone carries (few actually) the 11% Oikos Greek yogourt so it means popping into a store I don’t generally shop at. Donna does frequent there for her groceries so if I don't get back, I'll ask her to pick me up a couple of tubs.

On my way back through Durham, I filled a 3-gallon water bottle and headed home. Bill was working on the water system for the Suite (he can explain all that) and Gibbs was digging another hole to China on the opposite side of the trailer. Good grief! It was a big one! 👀 It really doesn’t do any harm; it isn’t in the lawn at least so we just chastise him and fill it back in. We don’t get too bent out of shape about it. It's just stones.

Bill always has lots of projects to do around here, some for ‘our’ living improvements and others for his own ‘hobby’ improvements.  So, he started adding a railing to the Hangar porch. There were almost enough pieces left from our stoop to do it and he’d shoved them under the Suite to keep them dry. I loaded them in Ptooties hatch and dropped them down at the Hangar and drove over to M’s to show him how to use the Little Green carpet cleaner. I wasn’t gone 15 minutes.

When I returned, I decided to work on my canvas painting but this time IN the Bunky.  The forecast was for heavy rains and storms later today. Bill stopped when he ran out of wood and I stopped when I noticed the sky to the northwest was getting darker and darker. Over us, we were still in light skies but we knew that could change in a minute. By the time we both got inside, the heavy clouds and rain spatters didn’t take long to move our way.

It got scary and every 5 minutes we were getting warning notices on our phones and the radio that we may need to take cover because of 110 km winds or tornadoes. ☹  It was covering a wide area but for the first time, I saw that Bill was nervous. He's my rock when I get anxious so this worried me. We packed up a few important things and then at 4:30 threw a few items for us and Gibbs in a bag and hightailed it to Hanover. Donna and Gerry have a basement at least.

We need to communicate with a couple of neighbours closer to home for instances like this as driving the 20 minutes to family may not always be feasible. The scare for us was when the blackest sky I’ve ever seen here moved towards us and over top of it were some weird clouds. We hit wind and rain not far down the road but by the time we reached their home, things seemed to have settled down. 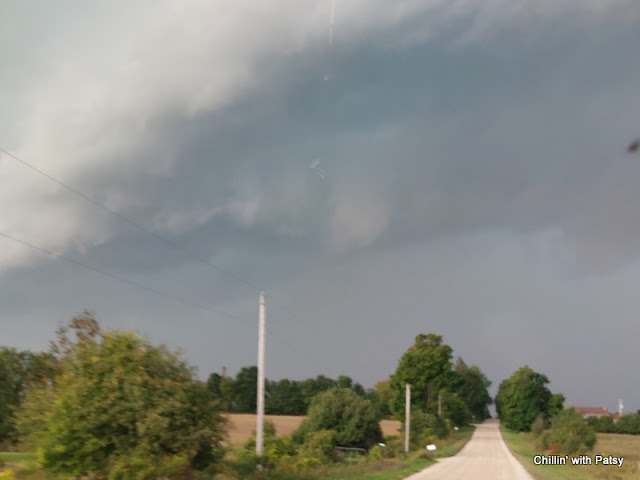 We prayed that things would be okay at the Ridge for us to return to later. Gibbs hasn’t been at Donna’s since he was just 8 weeks old so of course, it was a new exploring experience for him. 😊 We all chose food off a sheet of coupons from A & W and Bill and Gerry went to pick up our cheap supper. The Bacon Cheddar Uncle Burger combo was a choice for 3 of us and we enjoyed them in the dining room. Donna opted for the Papa Burger with onion rings. They looked good too although we agreed that we would like them better with the crispy, greasy hard coating. Yummy.

Checking the weather network around 7:30 showed that the warnings for tornadoes had passed and only a thunderstorm watch was in effect until early morning. Phew! We packed up and drove home. There was nothing indicating any damage anywhere along the route nor at the Ridge. That was a big sigh of relief. Family close to home had been communicating about the storm with one sister asking “Where is Pat?” They know we are kind of the sitting ducks up here.

We appreciate all their concern and let them know we were home safe. The rain does a number on our satellite service, always has, so trying to watch America’s Got Talent was almost pointless. We went up to bed around 10:30. Before I say good night, I need to mention that my 2nd oldest grandson, Jake, turned 24 today! I don’t know how this is even possible. I hope his card arrived on time. 😊

This was mostly a good day, we could have done withOUT the scare but at least we got to visit my sister.

Posted by Patsy Irene (Chillin' with Patsy) at 7:12 AM