Birds of a Feather, Flocking Together

On Sunday, Sept. 26th as a family, we slept in until 8. Gibbs woke us up at 6:30 to go out and then they came back to bed. We are so fortunate to have a sleepy boy, just like his parents! 😊 We had our tea and coffee together and Bill had some toast. I focused on writing a blog for yesterday. I’m getting really bad at keeping up with it some days!

The sky was clear blue for the most part and what clouds there were, were white fluffies. Gibbs and I went for a walk, the sun was very warm and encouraging. He was walking pretty good until we got to the corner and the shepherd and boxer at the corner house were outside on their patio. Small patio, big dogs, big dogs, big bark and ruckus. Jumping at each other and at the gate. Gibbs stopped just shy of the intersection. “No way, Jose!” he wasn’t going any further and I was in total agreement. 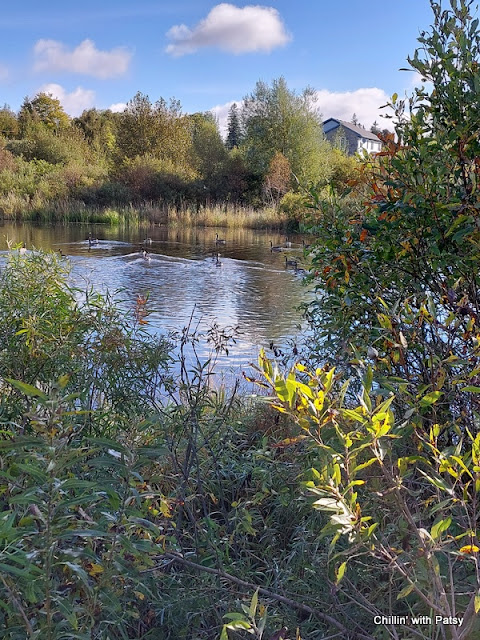 We heard of one time one of the dogs got over the fence (winter=snow piles) and bit a runner. I don’t take chances for myself let alone with a puppy. Gladly, we both turned towards home although I was disappointed for the short walk, it was lovely out! Back in our own laneway, I dropped the leash and let our little guy run to his ♥’s content. He was getting wet, leash and all as it dragged behind him, but he was in our presence and was having fun.

Bill took my wagon down with his tools and finished working on the railing at the Hangar’s porch. It didn’t take him long but while he was there, I started a fire. Bill said there was cardboard to burn. Unfortunately, the cardboard was wet and so was most of our old wood. However, persistence pays off and I managed to get flames and burn for a couple of hours.  Gibbs and I came in at noon so I could have some lunch, Bill had eaten toast earlier so wasn’t hungry.

M asked if I’d pop over today and help him on his laptop/phone so I touched base with him and we agreed on 2:30. He thanked me by sending us home with a couple of pieces of homemade apple pie. (No, he didn't make it) The clouds were by now, quite heavy in the north east sky, moving overhead so the fire wasn’t as cozy for me. In the afternoon, I enjoyed the sun while it lasted as I added logs. It wasn’t the easiest fire to keep going.

The geese were gathering in our pond today, which is different. Lately, they have been just flying overhead, landing and then taking off for ‘greener’ pastures. This morning, there were over 20 swimming together. 😊 It was neat to see so many all at once. Planning their route, I guess, like we wish we could. Bill was working at the Hangar and then moved up to begin straightening the shed. We discussed what we would be storing and where. 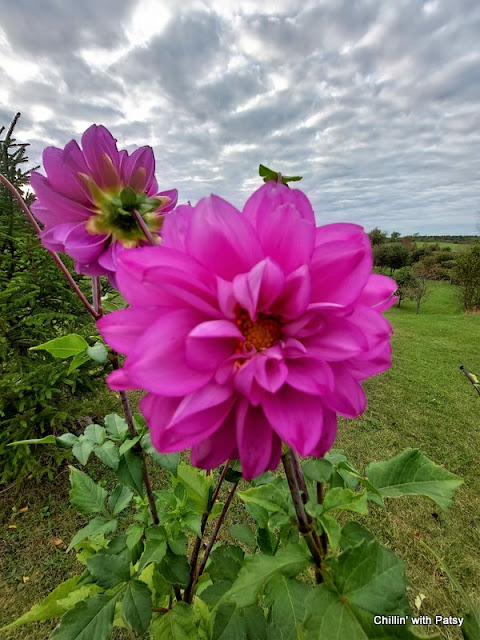 I was totally amazed when I noticed that the dahlia in the steam shovel up on the berm had bloomed all over again. I don’t know if that is usual but I was glad that I deadheaded the spent blooms and left the plant alone. 😊 There are a few flowers and I counted 34 buds! That is crazy! I’m thrilled. For supper, Bill grilled burgers and we loaded them up with all the fixings. For dessert, we had a piece of homemade apple pie with cheddar. Yum.

After dishes, Gibbs was up to his old tricks of wanting to go out and find sticks, more than he ‘has’ to do anything. I worked on my blog and we watched some tv at the same time. This was a pretty good day and the end to a great weekend. I hope you can say the same.

Thank you for popping in
Posted by Patsy Irene (Chillin' with Patsy) at 6:09 PM