No Doubt it is Autumn, Bridal Shower, Doggie Fun

On Friday, Sept. 24th we were all able to sleep in. After going to bed by 10, I was surprised that we slept so late – especially my bed mates. When I woke and checked the clock it was 7 am. Gibbs and Bill were still sound asleep. I waited until closer to 7:30 and rolled onto my back which always gets the little guy’s attention. He gave me morning kisses and I got up to take him out. We managed that without waking Bill up. 😉

We had our morning drinks together and around 9 I went to Hanover to pick up a few things at Walmart. It was another dreary damp day. Bill didn’t have to work today so had planned to pick up the debris and the cut logs at the laneway end while I was gone. It wasn’t very warm so we ‘ix-nayed’ that idea. We have 2 days to do that and there should be some dry breaks over the weekend.

Want to see it in motion?

I was home just before 11 and had a bite to eat before relaxing. I was overwhelmed by the birthday wishes I received yesterday. Facebook alone blew me away; talk about feeling loved. ♥

I had a blog to finish so did that and then settled in my chair with my book. By 2:30, I was finished it and have to say how much I enjoyed it. Not a Drop to Drink by Mindy McGinnis, if you get a chance to read it, you won’t be disappointed.

I showered first, then Bill and we got dressed to go to Bill’s daughter’s bridal shower in Tavistock. It’s just over 90 minutes so Bill offered to drive me since it would be night driving after the party. I appreciate gestures like that and it meant Gibbs didn’t have to be home alone – he could come and spend time with Bill. Somewhere. 😊 We left after 4 and I’d packed some egg salad sandwiches with a butter tart for supper.

Not far down the road, the sky changed. We left under a dreary cloudy sky and cool 11C/51F temps. Along Hwy 6, we had blue sky and soon, more blue than white and the temperature began rising. Weird but great! The party was to be held outdoors on Yvonne’s sheltered patio if possible so the closer we got to their town, the chances of that improved. We decided to stop along the way and eat before our arrival.

We stopped in Stratford and ate our sandwiches along the river bank. I’ve never done the ‘river walk’ which is odd because Bill is from Stratford. It just never seemed like the right time to stop and walk. 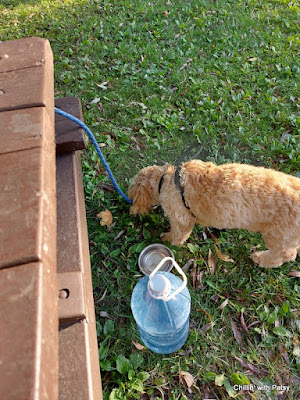 We were always just driving through, on our way somewhere where time was of the essence. So, today was nice even though we only walked for about 20 minutes. The day had warmed up to a pleasant 16C/60F. I was tickled to see 2 beautiful swans who came to pose for my camera. 😉 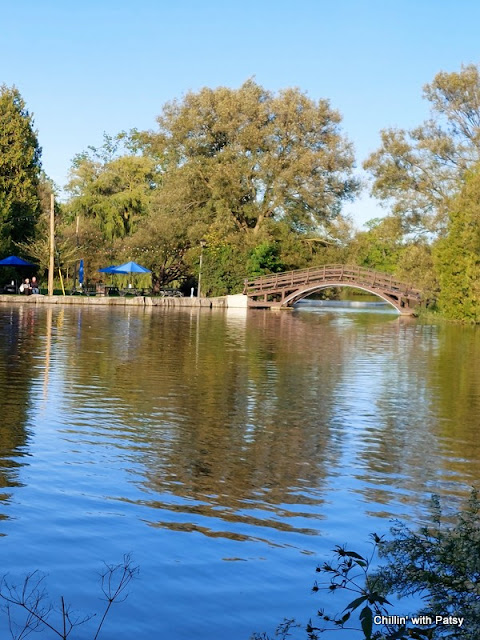 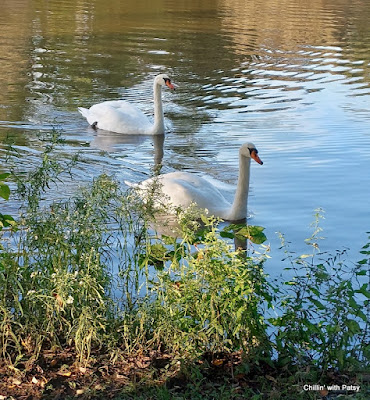 We arrived at the house about 6:45 so was surprised that we were the first arrivals. Bill was unsure what he should do, where he should go, thinking that perhaps Dennis would be home. The 3 girls were setting things out so Bill decided to take Gibbs for a walk. He walked part way with our grandson, Zach, and then came inside with another one, Connor, to sit in the living room. We had a nice turnout, all family on Krystal’s side so I knew everyone quite well. 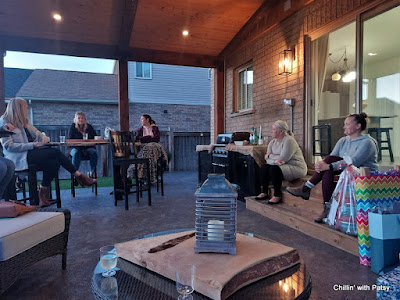 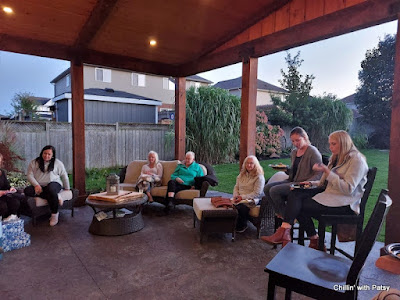 We were warm enough since the wind had died right off and when it cooled down later, Dennis turned on their large propane patio heater. Krystal was pleased with her gifts, anxious to update kitchen pieces in their home. The conversation and the wine was flowing and I had one glass more than I normally would have but that was an indication of how comfortable we all were. There was so much food and the 13 of us made a nice dent in it. 😊 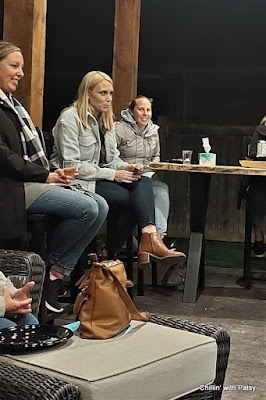 When Dennis let their 2 Goldies out into the back yard, Bill brought Gibbs to join them. Mind you, he hasn’t had experience with other dogs, other than Gracee in July, so I was interested in watching this.

One of the retrievers was quite rambunctious, only 2 yrs. old, but Gibbs didn’t back down at all and had fun running and running and running with Clark. At least we know he can be good even with some big dogs. He wore himself out and we waited until he calmed down before we left for home around 10.

It was a late night for all of us with Gibbs sleeping a lot of the drive home. With the exception, of course, of sitting up to make sure Daddy took the right turns. LOL This was a great day topped off with a fun evening. It was nice to see of Bill’s girls again, 4 of our grandsons and of course the rest of the family who were present.