What a Difference!! Early Birthday Dinner

Saturday, Sept. 18th Gibbs and I were up and out the door for our walk shortly after 7. We had a nice walk today and made it all the way to Turbine Lane. The sky to the east made for pretty pictures and I noticed a few branches that had come down in the Tuesday storm. I hadn’t seen them when driving. The air was cool but I find I can still wear shorts as long as I’m layered on my upper body. 😊 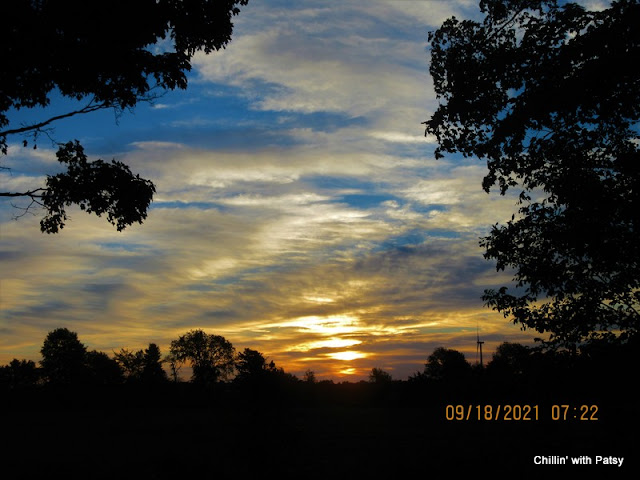 When we returned, I made my tea and Bill was just making his coffee, ready to work. With the sharpened chain saw, he took the truck down to our downed tree and set to work. It was after 8 when I joined him but other than a break for him to pick up Gerry’s trailer, we never stopped until noon. I was happy that Gerry offered to help and came over with his car.

I was the designated ‘picker-upper-trailer loader and unloader-truck driver’ and Bill just cut and cut and cut. You get the picture. I was very grateful for my brother-in-law’s assistance. As it was, we made 4 trips up and back down with an over-full load of branches. Once Bill started, we’d agreed that he would carry on to clean up the whole front, road side of the fence. We had a healthy apple tree and two cedars trying to grow in there.

Gerry left and Bill and I made two more loads before stopping for the day. There is still some small spindly stuff to cut and clean up as well as the cut logs to load and bring up for stacking. We were thankful that Gerry was open to leaving his trailer so we could putter away at it this week. The funny part was Bill giving me direction to back up the small utility trailer each trip. LOL, I want to learn but I was having such a hard time.

Bill does it so easily but was very patient with his teaching, telling me not to get frustrated. I’m getting it – slowly, very slowly. 😊 It looks amazing down there now! I can’t wait until it is all done and we’ll start on the laneway brush and give it a serious go. There is a lot of work there but we’ve got October and the remainder of September to make a stab at it. We had some lunch and a ‘collapse’ in our chairs for a few minutes. Bill eventually went up for a snooze.

With some time before our dinner commitment, he cut the back field of grass, one more step of weekend lawn care finished. Around 4, we started getting cleaned up ourselves and after feeding Gibbs early, left him in charge while we drove to the Acreage to pick Donna and Gerry up. We had reservations at The Paisley Common for an early birthday supper. They’d never been and we love it. Our friend and Bill’s boss, Mike, met us there for 6. 😊

As usual, it was delicious! Bill ordered the 1 pc. fish and chips and I ordered the smothered chicken with skin on mashed potatoes. Oh my! It came with cheese, bacon and mushrooms cooked on the chicken and a really nice assortment of mixed vegetables. Not the standard boring peas and carrots.

Donna ordered the same thing and we both loved it, bringing leftovers home. I have enough for another meal which is always nice. Gerry ordered iced tea and got the homemade version, (pretty much everything is homemade/home grown) but because it wasn't sweetened, Donna drank it instead. 😂

Just before paying our bill, the owner, James, came downstairs from their apartment so Bill and I were happy to say hello to him. He is such a nice young man and made us feel welcome. We’ll definitely go back again. We said goodbye to Mike and drove around to see the Inn and the de-construction process. At the back, we could see how much had come down so of course another picture opportunity.


Before leaving Paisley, Bill took a drive down past the old mill too and they have started renovations there. I’m glad it isn’t being demolished; it is another beautiful structure. Donna asked if ‘this’ was the street along the river that I walked and Bill answered for me. “There isn’t a street in Paisley that she hasn’t walked!” I thought that was comical, true but comical. 😊 After dropping them off at their trailer, we came home to Gibbs and he was ‘piddle’ excited to see us. LOL

I had had a Paisley Sling at the restaurant, since it was a birthday supper for us, and then at home poured a small bit of Desarono before heading up to bed around 9:30. Gibbs couldn’t decide if he wanted to come and stay so I closed the door and never heard a thing after that. This was a really good day. We got a lot done down at the road and had a wonderful meal out with some family and a friend. Thanks all of you for joining us!

Thank YOU for joining us here at my site, if you wish to comment, I appreciate it!