Another Sweet Lazy Day, Time for an Update, Gibbs Gets a Shower

On Wednesday, Jan. 26th Gibbs and I were up before 7:30 and out the door. This is a habit now, and a good one. If it weren’t for this little guy, I would easily talk myself out of going some mornings. It’s good for me. He’s good for me. We took the wrong road (again!) and I found myself in the Magic Circle territory (again!). This time, I knew where I was and wasn’t concerned but it meant our walk turned into 45 minutes instead of our usual 30. 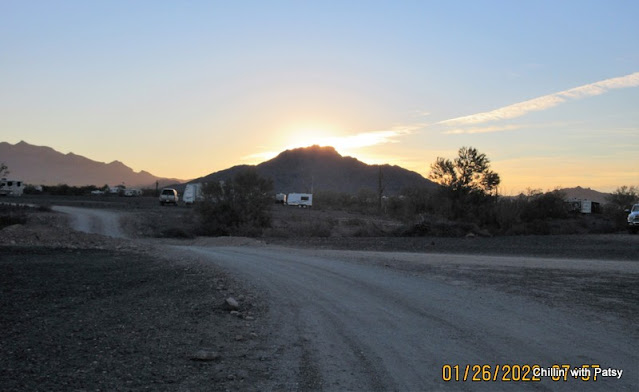 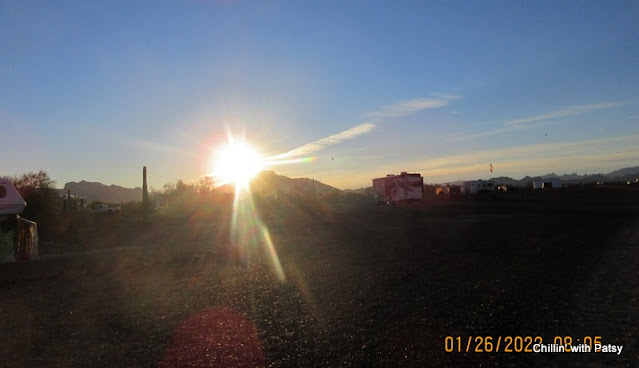 When we returned at 8:15, Bill had the furnace running and had had his shower. That was a good time for me too, while the bathroom was warm, so I hopped in for mine. This is the first time to wash my hair since I’d had it cut and what a nice change! Don’t worry, we wash every day so don’t think we’re walking around like little piggies. We just don’t shower as often as if we were in a ‘real’ house. 😊 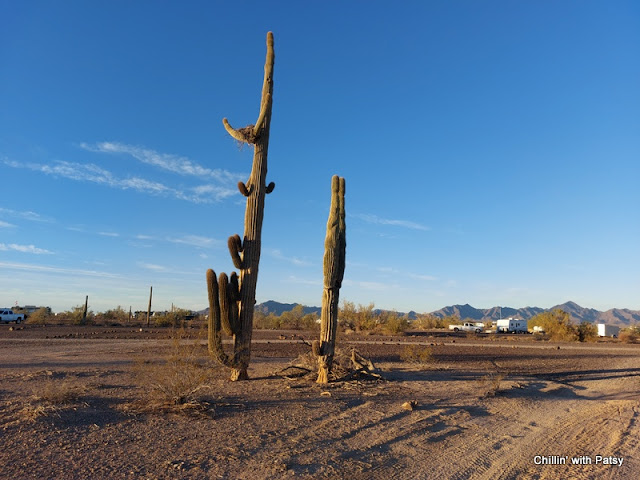 I had my tea and joined Bill downstairs. It was already in my mind to give our little desert doggie a shower today so when I finished, I donned shorts and an older top and carried Gibbs in and shut the bathroom door.

No escape route was available. He was the best little guy, especially after he was weighted down with the shower water. He has very thick hair, unlike his Mom and Dad, so I could only shampoo small areas at a time but he was so patient and didn’t try to escape on me.

Once rinsed as best I could, I rubbed him dry. I could have used a blow dryer but I didn’t think it was necessary while in the warm trailer. He was funny as he rolled around in the towel and on my chair. I had to remove the chair cover to hang it outside to dry but it was worth it. He’s clean again and even got a spattering of Bill’s powder rubbed onto his back. Now he smells wonderful again! ♥

I was feeling hunger pangs so blended some of the plain (yeuchy Arizona) yogourt with frozen strawberries, bananas and cream. It was a delicious smoothie to tie me over until lunch. I sat and finished my book and I will keep it for Gayle. She’ll enjoy the story too, I think. I made some bacon and eggs, and that was almost too much for me after a coffee. It was good though.

There wasn’t anything to do today but the winds were up again. It just delayed my sun sitting until after lunch. The forecast was for 64F/18C and cooler with the wind gusts. Our sun here is lower and much hotter than 18C is bac home so I wasn’t disappointed when I went out. I worked on my blanket until I ran out of the teal coloured wool but needed my wide-brimmed Mexican hat for protection. 😊

I wonder if you remember me mentioning a week ago of a change in our plans as we move forward? When I checked out American Trails RV Park in downtown Quartzsite last week, I wasn’t only disappointed that the pool would not be open during February (our month to stay there), but I couldn’t see a clubhouse either. That meant no room for me and my puzzles, no book room and probably no events to partake in.

So, Bill wants me to be happy, since he’ll be much closer to the flying field than he is here in the desert. He suggested we drive to Park Place RV Resort on the northeastern corner of Q. It is on the outskirts of town. The price was even cheaper than A.T.RV Park, by 25$/month. A beautiful clubhouse with puzzle tables, dining tables and a library and laundry room greeted us. Sold! We booked for 2 months, completely changing our original plans. Jell-o jiggled in our favour.

When we left, we were both smiling and I, in particular, was so relieved. No pool but other things I’ll enjoy. Another bonus is that the flying field is even closer there and I can drop Bill off and go to town easily whenever I choose. We’ll miss the downtown traffic (which will be considerably less in March anyway) in a good way. Happy wife, happy life. Also, happy hubby, lovey dovey! ♥ 😊

So, we cancelled the previous booking plus we cancelled Yuma Lakes RV Park which we were going to go into for the last 2 weeks of March. Unfortunately, this means we may miss out on seeing some friends again or meeting up with others but we have to do what is best for us. Come April, we will be in no rush to start for home so may return to the Yuma area for a week at that time. I would like to get back to Los Algodones once more to stock up on meds etc. Only time will tell.

I sat at the table and wrote out a grocery list, checking the fridge and freezer to see what was left. Variety is nice and helps the main chef plan better meals. The list got longer throughout the day.

I started a new book, as did Bill. He’d finished his rather quickly and by the looks of it is half way through this new one. I’m starting a Louis Penny book called Kingdom of the Blind. Within the first sentence, I was hooked. I love her Armand Gamache stories. The chapters are a reasonable length too which helps when there are distractions around.

Gibbs has been in and out, sharing his fluffy clean little self with each of us in turn. ♥ I should dab some clear nail polish on his dog tag as it is rubbing off on his fur under his chin. It was quite gray before his shower. ☹ It means taking his collar off again so maybe tomorrow. He keeps going up into the bathroom and poking his nose at the shower doors, so I’m hoping that means he’ll be open to another round in a month. 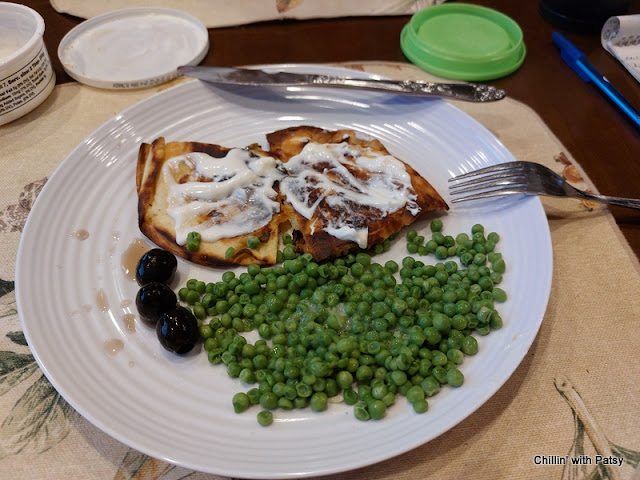 We had leftover spaghetti & sauce for Bill and the second half of my quesadilla for me planned for our supper meal tonight. Should do just fine with some raspberry Jell-o for dessert. We’ll watch television for a bit tonight but we do go through more generator gas than normal. There is definitely a leak. TV is Bill’s thing, as far as what is on tv and when, so I trust his memory to keep me informed. No doubt, I do count on him for a lot of things. ♥ 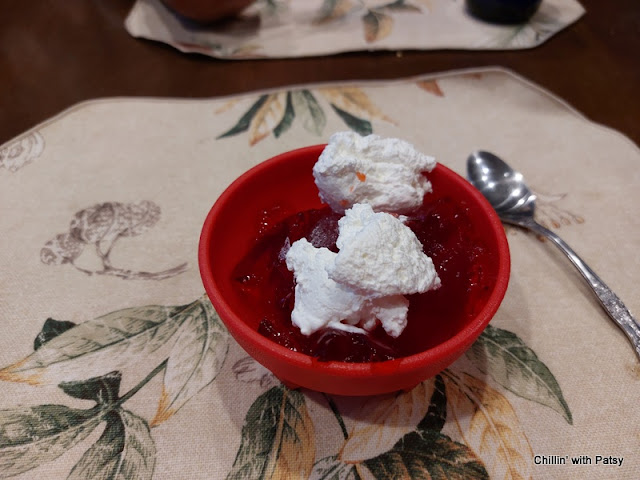 Another episode of Still Standing, this time in Chemainus, B.C., had us laughing as usual. After dishes, I finished my blog and we watched Good Sam, a new hospital program this season. 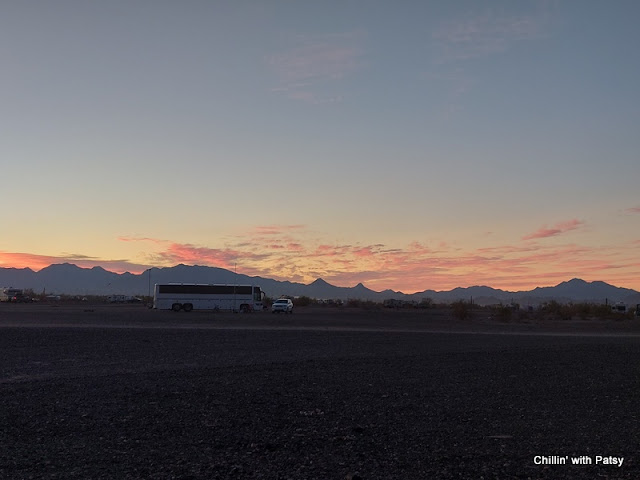 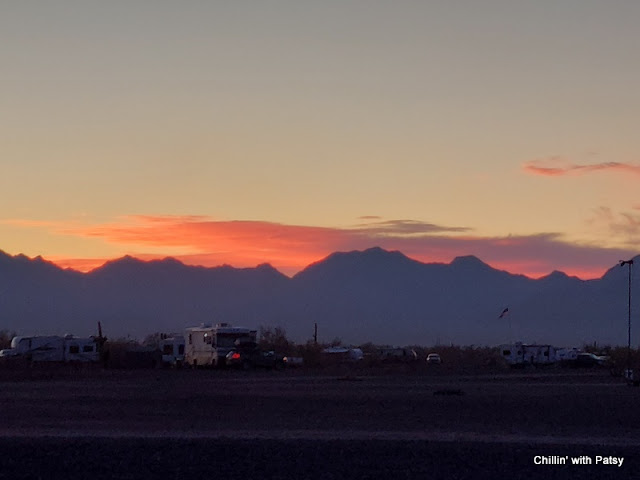 This was another good lazy day but we actually have an outing planned for tomorrow! We called Marilynne today at noon and caught her up with our location as well as other things. 😊

Thank you for your visit. Comments are always appreciated.

Posted by Patsy Irene (Chillin' with Patsy) at 9:03 PM