Bill 'Takes Off', On the Cooler Side of the Week

We had mostly clear skies this morning, Saturday, Jan. 29th, when Gibbs and I headed out for our walk. I remembered my sunglasses so we headed in a different direction. It’s not so difficult then walking to the south after the sun comes up. Which it did, quite nicely from behind the mountain. 😊 On the way back, almost home, Gibbs spotted Harold, someone we meet most morning. He always speaks to us and pets the furry bundle at his feet. I found out today that they are from Montana and are here for the whole season. Nice man. Bill got up when we did so he had Gibbs’ breakfast ready and boy does that dog know where his food is! Gone are the days when he hesitates over the food dish!

I wasn’t surprised when Bill got ready and announced that he was going to the flying field this morning. I’m glad to see him take advantage of the calm morning and he left at 8:30. I knew the day would be cooler than it has been by a few degrees but thought we’d have sun all day. After my tea was gone, I put the ingredients together to make my Baked Oatmeal recipe. I had been waiting to buy coconut so now there was nothing holding me back. 😊

When the clouds moved in, the batteries weren’t being charged enough to prevent the beeping of ‘low battery’ so I listened to that for a while before deciding that I couldn’t bake it without turning the generator. The power supply might have been enough but with the fridge coming off and on, as it does naturally, I knew it would take longer than the required 25 minutes to complete the baking process. I turned it off.

It was around 11:30 when Bill returned for lunch so I told him that we’d need to start the genny later long enough to cook my dish. He made a sandwich and I had the last of my broccoli soup. I won’t buy it again; it was from an envelope pack and was too watery. I had to add cream each time to make it enjoyable enough to eat. ☹ Live and learn! I’ll make my own broccoli cheese soup next time.

After dishes, we both found it too cool (seriously) to sit outside and be comfy so we read our books inside.

The clouds pretty much took over the sky around 2:30 when Bill started the generator and I baked my oatmeal. Just a nibble from the corner and although it looks funny with the green powder collagen, it tastes like yummy oatmeal with any oatmeal added. ♥

Supper was chicken thighs, a potato for Bill, cauliflower rice for me and vegetables. A good supper tonight. I’m really enjoying my Louise Penny book, Kingdom of the Blind. Good thing I have distractions or it would be finished by now and my butt would be sore from sitting! LOL

So, as it turned out, Bill went upstairs to watch some tv and Gibbs went with him, for the most part. There went my distractions and I finished my book before supper. Excellent to the very end! It was a great meal and after dishes, it was another quiet evening. I had to find a new book to start so moved to a James Patterson. Bill is finishing them at a mile a minute so I need to stay ahead of him. 😊 The sky didn’t co-operate too much today for outside sitting and we only reached 63F/17C, feeling cooler under the clouds, but it was still a very nice day. 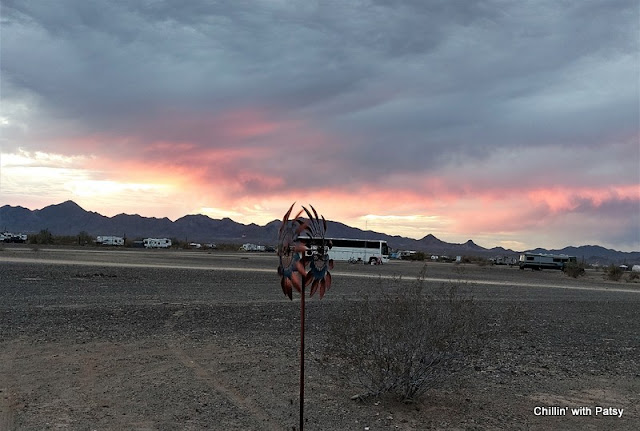 Posted by Patsy Irene (Chillin' with Patsy) at 9:19 PM