On Monday, June 6th Bill was up at 6, with Gibbs, who promptly came back to bed with me, and I got up just before 7. The work week begins. Encouragement was needed for Gibbs to eat his breakfast but he did eat it all so happy parents again. 😊 We didn’t go for a walk because it had just rained and looked like it could at any time.

Bill walked down the lane to meet Billy, his ride to Owen Sound, and I sat with Gibbs to drink my tea and finish playing my word games. It was a relaxing time, knowing I didn’t have to go to the body shop until 10. I read more of my book; it will be done today. It has me on the edge of my seat! When it was time, I took Gibbs out for a piddle and then left him with his treat to ‘look after the house’. He hops up in the chair when we say ‘we’ll be back’ and he watches, usually quietly.

At M’s, I was dreading 3 hours of hand sanding up in the bed of the truck but was happy that there were a few touchups from Friday’s job to finish and the front driver’s side fender to completely sand with the power sander. That broke up the steady monotony and the time zipped by. Mike, the truck’s owner, came by for about half hour, to see how things were coming along. Not rushing us, just wanted to see if anything was needed. 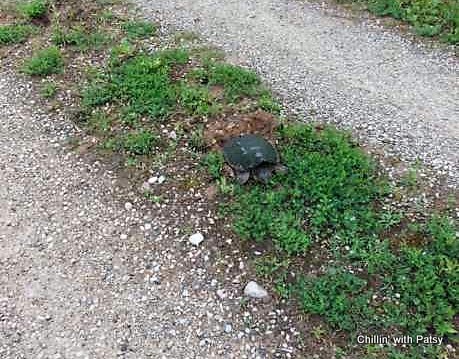 He offered us coffees and/or muffins which M took him up on but I declined since I had my thermos of tea with me. He’ll be back Wednesday and this time I accepted his offer to bring a coffee from Timmy’s. Before he left, he complimented me on the good job I was doing on his truck so it was nice to hear it from someone other than M. 😊 It was a good day and I got paid with the increase so feel good about that.

Back home at 1, I immediately hopped in the shower and Gibbs waits up on the bed until I’m done. ♥ Getting all that paint dust off is a freeing feeling! Ha ha. I opened a can of cream of mushroom soup for lunch and that hit the spot. My oatmeal had worn off by then, or rather, I’d worked it off by then. 😉 We sat, Gibbs and I, in my chair while I played the afternoon games and then finished my book.

I prepared potatoes, both sweet and white, carrots and onions. The roast had been sitting out of the freezer since I came home so pretty much still frozen. When Bill came home at 4, he rested for a bit and then drove to town to mail a package. That was when I got Madame IP out, loaded with a sirloin roast, veggies and got things turned on. It was heating up by the time he returned and it was then I realized that I had neglected to spice the meat. LOL I hope it tastes okay.

When it was 20 minutes from being ready, I preheated the oven for some Pillsbury crescent rolls. They will be a nice addition to our supper. The roast took longer than I thought but we were patient and it was worth the wait. The potatoes might have been a tad overcooked, especially the white sweet ones, but still good with butter and gravy. Bill had corn instead of the carrots, he isn’t keen on those but I am! 😊 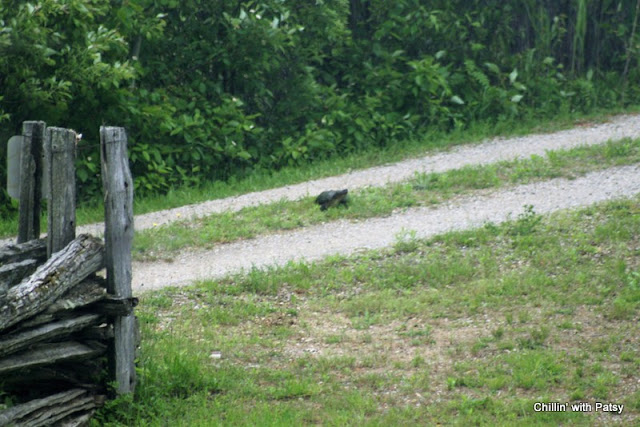 After loading the dishwasher, Bill made tomorrow’s lunch and the damp night passed without incident. It has been raining off and on all afternoon but it hasn’t been cold. It reached 19C/66F  which would have been nice without the precipitation. We watched a few turtles today in the lane and up here on the lawn, digging holes for eggs but only one seemed to finish the job. She was very small and right off our patio area.

When she was done, I covered the spot with a patio stone for the incubation period. We’ve figured out why we’ve been seeing egg shells. Saturday night when we returned from the show, a skunk was digging them up. How infuriating!! The turtles go to so much trouble finding and creating the perfect nest and they are being dug up and eaten by another of nature’s critters. This one, I want to try and protect. I’ll remove it during the 2nd or 3rd week of August and hope for the best.

This was a good day. Work was easier than I thought so that was a bonus. 😉 I’ve taken the day off from auto body work tomorrow, you’ll see why at that time.