My Thursday Turns into Friday

On Thursday, June 16th I heard Bill and Gibbs get up and the little guy coming back up to bed with me. It was a restless night because it was so hot up there in the bedroom. I think Bill had left the a/c on downstairs but it wasn’t helping a whole lot. I dropped off easily at 10 when I went up but could faintly hear rubber squeaking.

I followed the sound and Gibbs was on the floor chewing on my ‘new to me’ flip flops!! What am I going to do with him? Bill didn’t notice he grabbed them when he came in. It could easily have been another pair of my rubber shoes ruined if I hadn’t heard him. I even had ear plugs in and in the silence, still caught him. ☹ Little imp, they must feel good on his teeth or gums or whatever. Good thing that I love him so much! ♥ 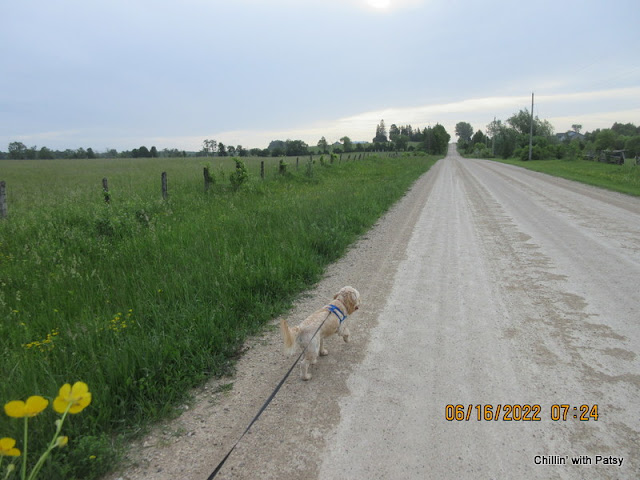 I heard Bill talking to him again at 2:30 asking him if he had to go out. Sleepily, I suggested Bill roll over and ignore him and that worked. Getting into a habit is too easy for the little guy and Bill doesn’t need to be taking him out in the middle of the night. He went back to sleep until this morning. I figure he was just warm as well and uncomfortable. The upstairs a/c is too loud for Bill to sleep so we don’t turn it on once we’re in bed.

Back to today. I felt pretty rested when I got up at 7 and Gibbs and I took our walk almost to the corner. Another hot day coming our way so we kept the a/c on. Bill was just working down the road again today so he drove Black Beauty. I had no reason to be outside today so Gibbs and I weren’t out much. With the puzzle finished yesterday, I decided to just concentrate on ‘inside’ today.

We haven’t got my garden ‘fence’ up yet so I don’t want to plant my egg plant yet. Hopefully on Sunday, Bill can help me do that. I’m not good at that kind of project on my own and I know he has a plan that will be perfect. No rain again overnight and today is looking like a ‘no-go’ too. The sky is mostly clear blue but there is a lovely (albeit warm) breeze. 😊

I had my tea and some cereal before driving to M’s for 9:30. There was some ‘secretarial’ stuff he needed me to do first and then I went back to work on hand sanding the inside of the doors. I don’t like this kind of sanding; the areas are small and there are bolts to work around. Hard to get the paper in those divots.  Oh well, it just slows down the final process so my 2 ½ hours today still didn’t finish the Chev.


We have a new ‘used’ hood to replace the old one so there is work on that and that should be it for me. The Datsun is waiting. I’ll go from blue dust to red dust next week. At 12:30 he said ‘see you tomorrow’ and I reminded him that I don’t work Fridays. I offered him a couple of hours because I missed Wednesday but he said Monday was fine.

There is a lot of work, some easier jobs than others. Two‘quicker’ jobs are coming in over the next two weeks. My shift will start to be 4 hours when I can do it. Cha-ching! M chatters a lot, sometime very repetitive. He’s been married 3 times, like we have, and he always has a story to tell. He’s lonely and likes to talk, so the least I can do is listen. 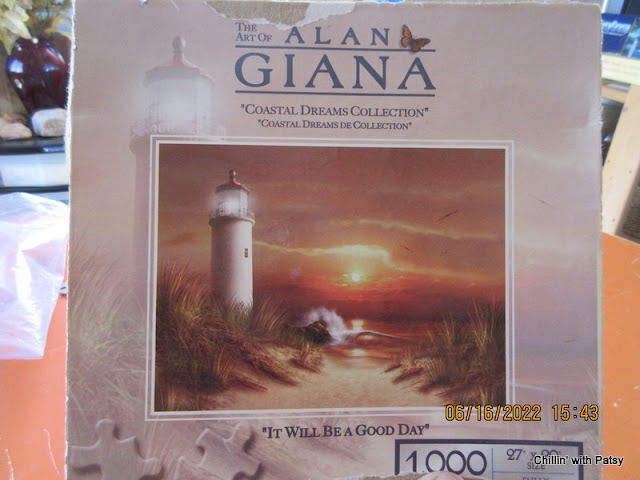 Back home, Gibbs did his little run around to take care of business and then we came inside. Even he realizes that it is nicer inside than out! I had my shower, (boy do I get dirty!), some lunch, with an egg, cheese, avocado and leftover liver. That hit the spot. The Suite needs attention, dust is piling up on the table tops so I’ll do that tomorrow after cleaning at the Mat. I’m glad the weekend is here. ♥

When Bill came home, I went out and started a new puzzle. It should be interesting, a lot of the colours are similar. We moved inside the Suite when it got too hot. It is very comfortable inside with the a/c running. Temperatures outside reached 29C/83F and again, the humidex was closer to 34C. For supper, Bill grilled our bacon cheese burgers and they were delicious. Too full for the ice cream I’d planned!

Bill loaded the dishwasher and went to the Hangar. First, he cleaned out the Weber Q. It has been cooking slow and the grease pan was full. Hopefully, that is the answer. Gibbs and I went outside too. I worked on the new puzzle and realized that it had cooled down nicely. That meant we could turn the a/c off and open windows tonight. Yay! This was a good day and my weekend has begun! ♥

Posted by Patsy Irene (Chillin' with Patsy) at 9:10 AM