Not a Shirker but Maybe a Shrieker

So, on Thursday, June 30th, not only was it the last day of the month but it was also FRIDAY for a lot of you and us. Especially those of us in the working field, either by necessity or happenstance. 😊 Bill was off to meet Billy at Mike’s in Mildmay while Gibbs and I were fortunate to take it easy for a couple of hours after getting up at 6:45.

I think I heard it rain at some point early morning but were not sure. My first job at hand is not really a job but I make it one. That’s finishing my blog post from yesterday. Last night, I was ready to throw my laptop when it didn’t want to connect nor let me bring pictures over so I had to close it and walk away for its own safety. This morning wasn’t a whole lot quicker to start but finally I was able to get ‘er done.

I changed into work gear and took Gibbs down the lane and the road for a short distance before turning back. I’m still finding holes in the driveway and still evidence that the skunks are having a heyday with turtle eggs. Buggers! ☹ M had texted and asked me to bring my knee pads (which I always have) as I would be working in the bed of the Chev again. ??? Okay, but I thought he was painting it yesterday. Puzzling.

Until I got there. There was a bit of a mishap and it needs to repainted again. Don’t ask, it was a fluke, but it needs some heavier sanding in spots and just ‘dusting’ up in others for the new paint to stick. Crap! I can grumble to myself all I want but it’s a job that needs to be done. I don’t shirk my ‘duty’ when I’m asked and the money is forthcoming so I set to work on the tailgate. Let’s just say that I was happy to leave when my 3 hours was up. 😊

Back home, I had lunch and then Gibbs and I went out to cut grass. As I stepped up to go into the storage shed, a garter snake made his appearance at my feet! Usually, I’m not a shrieker but when that little gapher slithered up through the cement block at the step, I admit that I shrieked! I quickly realized what it was and that it wasn’t harmful to me so held back from any other noises. 😂

I sometimes use a sharp noise like that to get Gibbs’ attention when he’s not listening or coming. It works. I didn’t want him coming and getting involved with Mr. Garter. I managed to get my mower out and cut the grass. It was hot so I’d changed into my bathing suit and donned my sunhat while I cut. Such a sight! I had something to slip on close by just in case someone other than Bill came up the lane. They didn’t and I finished within 45 minutes.

After putting things away, I added some rain water to the pool and sat with my feet in it in the partial shade. Gibbs didn’t want anything to do with it today but instead continued to run around and have fun. He was pretty good the whole time I cut the lawn and didn’t go too far but it was 3:30 and time to come in for a cup of tea. When it felt hotter inside than outside, I’d opened windows today, we sat outside in the shade and waited for ‘Daddy’. ♥

Bill looked hot and tired when he came home so I suggested he not worry about trimming today. He rested, grilled our loaded burgers for supper and went out to trim. 😊 He’s hard to tie down but once he started, he felt better, obviously. I went in to the Bunky and faced the difficult puzzle that has been there for too long already but I’m a fool and won’t give up on it.

I managed quite a few pieces tonight while Gibbs, on his rope, watched for wherever Bill went. The breeze was so nice and he was quite cool. When Bill finished, we came in at 9 and he put The Big Chill movie on. What a hoot! I’m not sure I can stay up until it’s over at 11 but I’ll try. I have to clean in the morning and tonight I’m going to pray for a dry day tomorrow! 😊 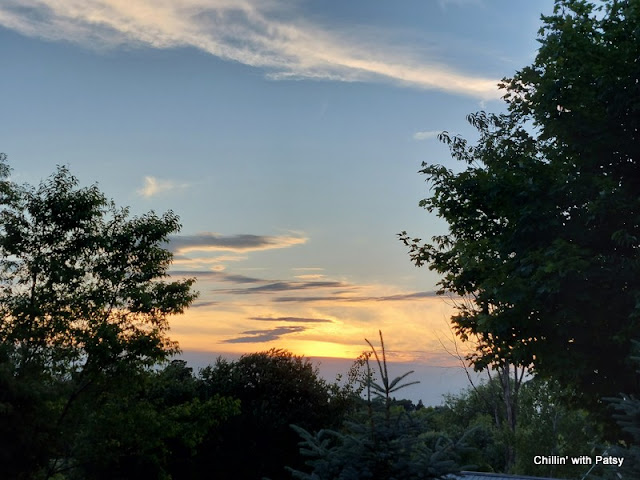 This was another good day. Thank you for taking the time to stop by.
Posted by Patsy Irene (Chillin' with Patsy) at 8:29 PM