On Monday, May 1st, hey! Welcome to May! I woke up at 10 minutes to 6 and heard Bill in the kitchen. I thought that he had slept in and was just getting moving but he had already had a shower, packed and was making his coffee and breakfast.
He had an orientation in Lambeth at CanAm for 9 am so he had to get on the road early. I lounge dressed and came down to sit with him until he left. Actually, I sat, he still was bustling around in preparation to two days away from home. By 6:10 he had kissed us goodbye and was pulling out of the lane in the rain and wind.
Surprisingly, the overnight temperatures rose to 11C while we were sleeping. At least it doesn’t freeze your knickers off when you step outside. Yours or mine! So Bill will hopefully have a good drive as long as the rain isn’t too bad. The traffic at that time of the morning shouldn’t be abundant.
After watching the little Toyota turn onto the road, I went back to the warmth of my bed. It was warm downstairs but I was still half asleep. I wish I had been wide awake and checked the fridge before he left because he managed to forget a couple of things he’d set in there for lunch. 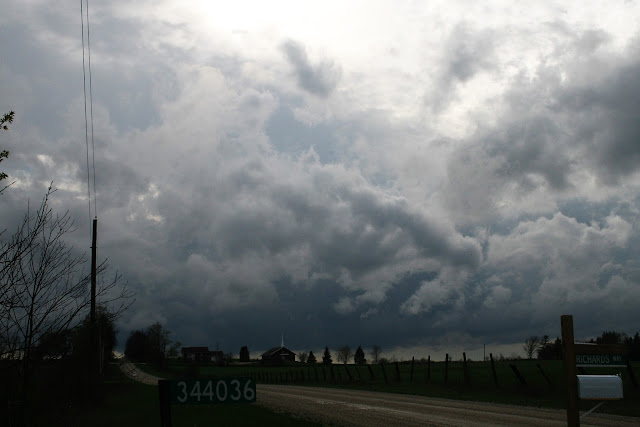 When I got up again just after 7:30 I dressed and drove the 3 containers of recycling down to the end of the lane for today’s pick up. Bill looked after the garbage bags for me. By 10:00 I’d witnessed the truck stopping and was happy to see everything was gone. I drove back down in the rain to pick up our blue box. We missed the last pick up somehow but now we are on track. It is a bi-weekly pick up here.
This is certainly a day for the geese and ducks. It doesn’t affect their routine at all, they continue swimming, dipping for food and flying around honking. The turbines are moving today, it is when the winds either stop or get too strong that they stop them. I was grateful for the stronger winds last night when Bill was home, because I’ll be alone tonight I didn’t want to be concerned.
I didn’t have much going on today other than hanging and tucking away my ‘new to me’ clothes. I’m pleased with all of the things I brought home, I was very particular this time in choosing items. With that done I took a walk to the Restroom and reminded myself just how warm it felt compared to yesterday. It is up to 14C at 3 pm.


Bill called at 12:30 to check in and let me know what they were having him do today. One orientation of a travel trailer and then take the same rv to a park in St. Mary’s for a customer. This afternoon was to be another pick-up and delivery to Dalewood. Sometimes plans change due to a customer’s schedule or I suppose even the weather can determine delays.
I made myself a couple of hard-boiled eggs for a change and they tasted good with a tangerine as a chaser. I tend to drink more tea when I’m alone, especially on a day like this and just finished one. It is a comfort drink for me whether I’m working on my laptop or reading my book.


We are all anxious to have some warmer drier weather, one nice day and then 3 or 4 dreary cold ones just isn’t cutting it! This afternoon wasn’t much busier than this morning was. There was no guarantee that the sky wasn’t going to open up as soon as I went out so I stayed indoors most of the day. The bathroom got a good cleaning so toilet, sink and shower are now sparkling.

It was a nice surprise when the sun made an appearance after 5 so once I’d fed Clemson and watched the CTV news and weather, we walked down the lane to check the mailbox. I’m trying to get Clemson used to that walk ‘to get the mail’. He is getting better at ignoring the road, turning around as soon as we get to the end.
I had leftover ham for supper with a corn muffin, something quick and simple. It may not sound too appetizing but eating by myself isn’t cause for anything elaborate. As long as I eat well and eat enough, who is to complain? It was nice to hear from Bill a couple of times after dinner, I like to keep track of where he is and what he is up to.

By 9:00 he was settling in for the night and called me for the final time. I was recording The Voice so we can watch it together and watching the First Chapter of Genius. This is the story of Albert Einstein and I thought it would do me good to learn more about him. I was never good at picking that kind of stuff up at school.
I hope you have had a nice day and enjoyed the warmth of this day. One day we won’t have to talk about the weather, it will be nice for days on end. today was a great day to get some more reading done. I'm reading another Lisa Gardner book called Gone. It is a sequel to The Third Victim but there is obviously one between the two. The story doesn't quite flow. I'll Google it and try and find the missing book.


Thank you for following along today. I love to receive your comments.
Posted by Patsy Irene (Chillin' with Patsy) at 8:17 PM