Another Hot Beautiful Day, Shopping Day, Ramblin' Rose (me, it is a long one)

Thursday, May 18th came and it was going to be another wonderful outside day. I woke up a couple of times through the night with the warm wind blowing in on my face. It felt so good. I’m lucky to have the little bedroom window on my side of the bed and I’d made sure to leave it open when I went to bed. It was 7:30 when Clemson and I moved to get up.
I opened blinds, letting the sun in and also the heat but countered that by opening windows to let the breeze in. Another windy one, so some blessed relief from the humid air. I texted Bill to let him know I was up and within a few minutes he called and we chatted in person. I made my tea and sat at my laptop for a while reading yesterday’s posts and comments.

It is already 18C outside, bring it on! After having a quick spit wash and making myself look presentable I closed up the Suite and took the truck into Durham. I was on a mission to buy my tomato and pepper plants this morning. I checked out FS in town but they couldn’t offer much at all so crossed the street to the Foodland nursery.

Bingo! I was only going to buy 1 of each vegetable, but 2 different varieties of each. Their prices were really good for a 4-pack so I couldn’t resist. The plants are about 5” tall so they should, I say should, withstand the elements pretty well. My sister, Gayle, recommended I don’t buy these small ones but spend the extra money and get a 4”pot size with one plant in each.

Being it is my first-time planting in a LONG time, I don’t put a lot of confidence in just buying 1 tomato plant or 1 pepper plant so this is kind of a test. If I end up with veggies coming out of my ears, oh well, I have friends and I have a compost bin. Not entirely ignoring Gayle’s advice though, as I wasn’t done shopping yet.

From there I drove to Hanover. At Independent I found my 10% fat Liberte yogourt as well as 4% fat Cottage Cheese. I can’t stand the taste of a watery dairy product so buy full fat products or nothing. These are good animal fats so my cholesterol will not change because of it.

This store also has a nursery/garden centre outside so I went looking for the larger plants Gayle was talking about and found them. I picked up 3 and they were only 3.99 each, good price and the plants are about 9” tall. I think for the $20 I spent on plants, I’ll get my money’s worth easy.

In the same strip mall was a Dollarama and a Giant Tiger. Now, I love, love, love Giant Tiger for their clothes prices but I refrained and walked right by. I don’t ‘need’ anything today. I went to the Dollar store instead, which kills me. What happened to things being $1 in a dollar store? I can rarely find any $1 item. I actually did find what I was looking for and even found one thing for a buck. Yay!
A stop at the Bread Depot for our favourite bread and a pack of hamburg buns and then to Holst Office Pro for 2 ink cartridges. That was a chunk out of the ole wallet, but whatdoyado? We need them. I know many of you probably take them in and get them refilled for less. Been there, done that but they just don't last as long for us so we'd rather bite the bullet and complain about it. :)

Before I left Durham, Bill called to say that they had a cancellation for his orientation this morning. Darn! BUT, they had one in the afternoon for him if he didn’t mind delaying his return home. Of course, he took it. No plans are made in concrete, we learned how Jell-o stirred this past winter and we roll with it. So, he will now be home later this evening instead of this afternoon. 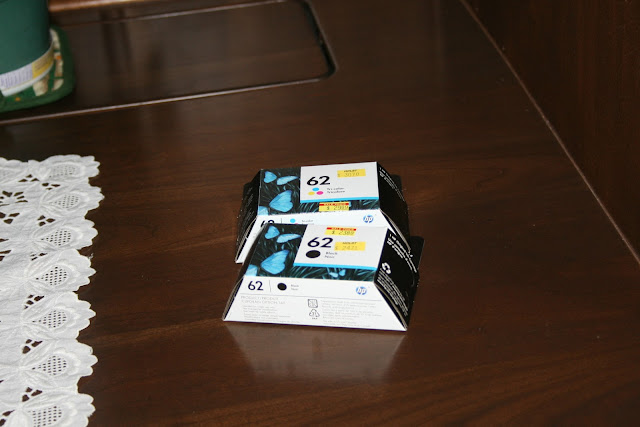 Just leaving the last store in Hanover and he called again. This time to ask about finding a vet in our area up here so we can forgo having to drive back and forth for Clemson when he needs meds, shots or other treatments.  I asked at the post office in Durham where the closest veterinary clinic was and was directed to one in town. Yay! That was easy! I stopped in and spoke to the gals about our pooch and they are happy to take him on. I’ll have Southside Animal Clinic in London fax his paperwork to them right away.

At home, it was around 12 noon and I was hungry so cut up an apple and some cheddar. It will be a weird supper night again with Bill arriving home around 8 ish but I’ll wait and see what that means. I recorded my day’s expenditures in Quicken and started this post. There are big white fluffy clouds sharing the blue sky today so I think I’ll head out and start planting. The peppers should go in the ground pronto.
The biggest challenge was getting everything up the hill without it blowing away. This meant a few trips. Gusts between 50 and 70 mph winds were making this more of a chore than I’d expected but it was going along smoothly until the farmer who was plowing his field behind me came by. Not his fault but as he got close, I had to turn my back to him to keep the dust from blowing in my face. Friendly guy though, we exchanged a wave and a shrug.


After placing my goodies in the ground and watering them I proceeded to take Bill’s advice against the hungry and inquisitive birds. My stakes in the ground were pretty pathetic to say the least, but the best I could find around here. From those I strung binder twine (there is a word from my farm days!) with foil plates and plastic containers.

The birds will stay away just because it looks so ridiculous but my little garden looks lovely. With a huge gust of wind, one that covered me in dust from the field had my heart pumping as I gathered my things up and ran for the shed. That gust lasted too long for my liking and the sky was battling with gray cloud masses.

The portable solar panel had toppled over, the water barrel was rolling, the chair at our patio set had tipped, the bird bath was flipped and a storage bin was in the middle of the lane. After gathering everything up and securing it, I fought to get myself in the Suite safely. I won’t deny that I was a bit fearful.

Settled inside, I closed some windows and the outside door just so it didn’t sound as bad mainly. I had a plan of attack in my truck keys sitting on the counter and shoes at the door in case it was necessary. I sat and opened my book, Jack Reacher will see me through this like no one else!

It seemed like no time and I noticed the clouds had moved over and away
completely. The winds had died a bit but not a lot and the sun was still warm. Clemson and I went out for a walk down the lane and to see if there were any turtles out. We watched them slide languishly into the water as if we were going to eat them.

Bill called just after 5 while I was having a conversation with my friend Debbie. I was giving her a pep talk as requested but won’t go into it in case it is a secret. “Good luck, Debbie” is all I will say! Bill hadn’t left Lambeth yet but soon, he said, so after a stop at Costco then one to say hi to his Dad, he’d be home. Yay!

I had a toasted tomato sandwich for supper with a glass of milk. He will be grabbing something on the way home for a change. That is good, it will be a late meal otherwise. We can have some ice cream together later. So, I cleaned up dishes, took Clemmy up to see my garden and then returned to this post. It has been a great day with a lot accomplished and more Vitamin D in my pocket for the next rainy day.

Not much can top last night's amazing sunset so I'll leave you with those in a sequence all within about 3 minutes tops.

I hope you’ve had a fun day as well. Thank you, as always, for reading. You may comment if you wish, I enjoy reading them.
Posted by Patsy Irene (Chillin' with Patsy) at 5:19 PM