Slept In, Acreage Visit with Friends, Drizzly Afternoon, Inside Stuff

On Sunday, June 3rd, we’re glad it is an official ‘day of rest’ because we slept in until 8:30. It was much nicer for sleeping last night, with a bedspread and our Arizona blanket thrown over top. It only got down to 63F/17C overnight and although we didn’t get into bed until midnight, we slept well. We had our hot brews and I worked on my post from yesterday. It’s true, life does go on whether I finish a daily post on time or not!


We contacted Rob and Pat and asked if they’d like to come out for a tour of my sister and her husband’s Acreage, 6 km away. Rob wanted to take his beautiful GMC out for a spin so readily agreed. We had breakfast and cleaned up dishes before they arrived around 11. We led them over and Donna, Gerry and Mike were outside to greet us. As they showed them the bunkys/cabins and their ‘new’ fifth wheel, we had no doubt they would like what they were seeing. After a short visit, we said our goodbyes and Rob drove west and we drove east towards home.

By the time we got out of Ptooties, the drizzle started. Hmm, that truly puts a ‘damp’er on the day. Inside stuff will get tended to. Bill received a few things as I’d mentioned on Friday but one of the most important was his Dad’s replica model of a sail boat. We believe it was to be the Blue Nose II, a fishing and racing schooner built in 1921 in Nova Scotia. We’ve know it would be Bill’s one day but still haven’t decided the best placing to put her. We need to think about movement etc. 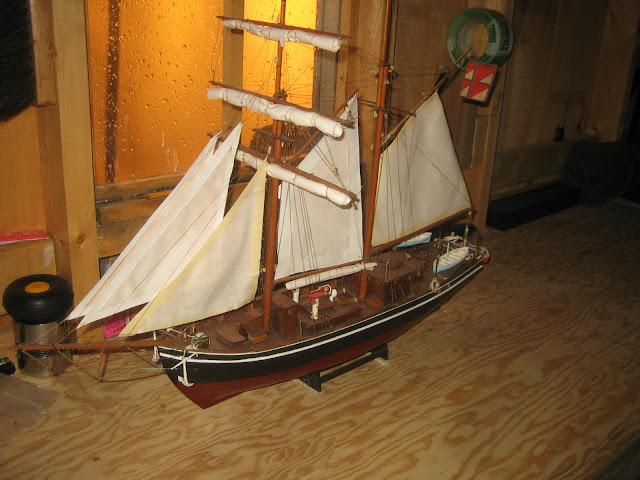 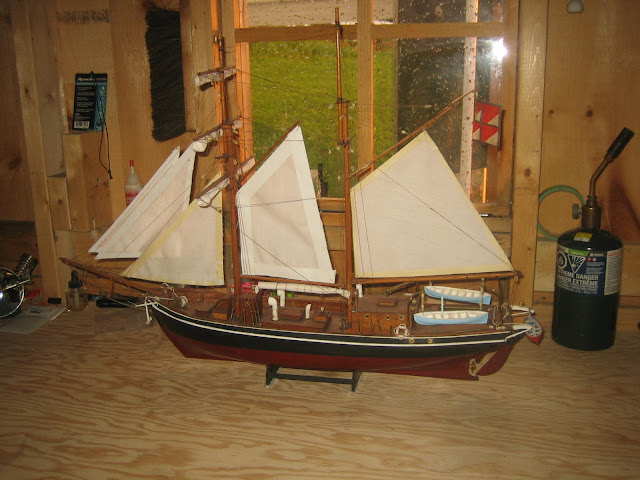 Because of the late night and I’m sure the weather was a factor as well, Bill and I felt draggy and took Clemson up for an afternoon siesta. Surprisingly, to me, I dropped off alongside my guys and we all slept for an hour. The rain seemed to have stopped, and although it was a gentle shower it seemed we got enough to water my plants and flowers. Maybe we’ll get more before the day is over.

Bill had also received many clothes from his Dad’s closets and so we went out to the bunky where he could try them on and make decisions. Keep or let go. Most of the shirts and pants fit like a charm, some were a bit snug but wearable around here. A few were too tight or didn’t suit Bill and went into a giveaway pile while about 5 shirts were kept for a few months to see if Bill drops a few pounds. There were also some pieces of jewellery, namely watches, that Bill was very happy to have.

We came inside as the spatters of rain returned and turned the tv on. An interesting program, Pearl Harbor: Survivors Remember, was on so we sat down to watch it. In the meantime, I was able to stitch a tiny dome fastener on one of my own shirts that I have been meaning to do for a couple of weeks. It’s a lazy afternoon and although I don’t know yet what I’ll make, I have a pound of ground beef out for thawing.

Before we knew it Clem was bugging us for his supper and Bill finally gave in and fed him at 4:40. Bill: 0, Clemson: 1 Before I knew it, the show ended and it was 5:30 so I started peeling potatoes and browning the beef. Making things for supper out of your head is always interesting, but I went back in my memory to one of my favourite “Mom” meals. Mashed potatoes, hamburger and onion gravy, steamed cauliflower, corn and Pillsbury crescent rolls.
Once things were underway, the sky opened up and with some grumbling, we had a brief thunderstorm. No lightning just rain mostly. The good thing is that it was a steady rain which was enough to give everything a good soaking before it settled off. The bad thing is that Clemson chose that exact time to need to go out. Bill opened the door and once the rain blew in on him, he changed his mind quick. Five minutes later, with the awning now out, he definitely needed to go. Smart pup, he went under the Suite to do his business.


Supper was ready and we enjoyed a lovely Sunday night meal at 7. Bill was talking back and forth with my little brother, Michael, on text and finally called him. With a new to them 30’ Wildcat trailer, he has some small issues he is trying to figure out. We are so looking forward to see him and Crystal this July for a visit. We cleaned up the dishes and finished watching American Pickers. From this picture, maybe you can guess what town they were in, in New Mexico.

The rain has stopped maybe for the night but it doesn’t really matter. I took a walk down the lane to add a few steps to my day and came back in and sat with my boys. I was given a picture from a staff member at Rockwood on Friday and I wanted to share it with you. This was taken on the day I took Mom down for her Mother’s Day nail treatment. Aren’t we gorgeous!?

Another great day, they are adding up for sure. Life is great!

Thank you for taking the time to catch up with us. I love it when you leave a comment.