Bill and I were awake and up at 6:30. This would be the day we’d sleep in so he set his alarm to be sure he was up. I made my tea and made Bill’s coffee in his travel mug. We didn’t sit for long and he was on his way to Harriston for Black Beauty’s appointment. We’d had a recall notice on the crank case ventilation oil separator (there is a mouthful for you) and needed to get it replaced before the winter.

When he left, I brushed my teeth and drove into Durham to Foodland. I’ve never been there that early, 7:30, and was surprised the number of cars in the lot already. I was only going to purchase lunch stuff for today but noticed that some of their sale prices, on things I wanted for the weekend, ended tomorrow. So, I picked up those things as well and will do the rest of the shopping on Thursday. 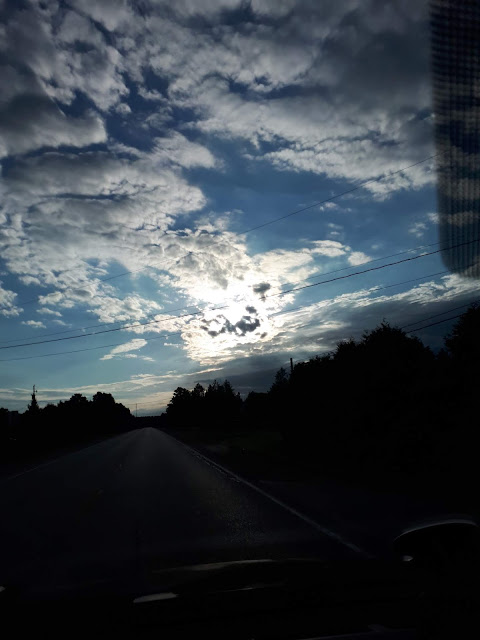 Back home, I took advantage of the free time and the beautiful morning and went for my 2-mile walk. I had a yogourt and a piece of light rye toast along with a coffee around 9:30. I may not be too hungry at noon hour but that’s okay, I’ll have a nibble at least with Peter and Linda.

Bill texted at 9:15 to let me know the truck was done and he was on his way to Mount Forest Cdn. Tire to pick up a new Shop Vac. Ours that we’ve had for over 15 years is giving up the ghost. 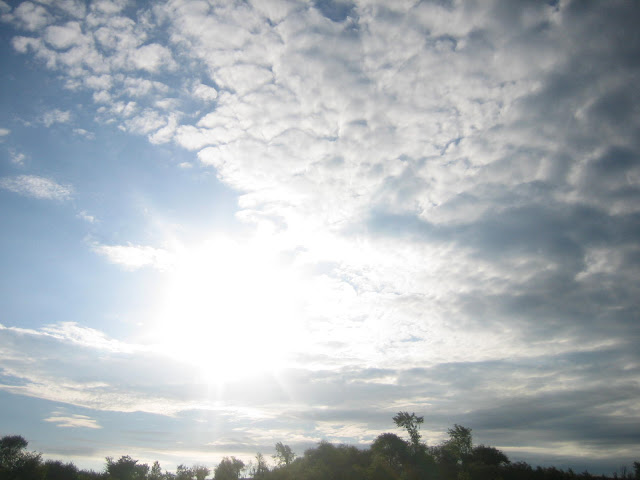 I bided my time by picking the ripe tomatoes and checking on the peppers. There were two ready but if I leave them, they will only continue to grow. I noticed some of the tomato plants are drooping and the last thing I want is for the vegetable to be sitting on the ground. I gently twisted the stalks so as not to knock them off and walked away with a nice harvest again today of 4 tomatoes and a green onion. 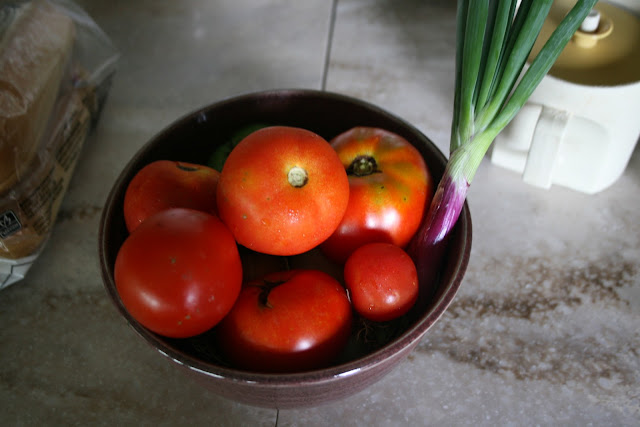 I got things prepared as much as I could for lunch and began my post. Bill got home around 11 with his story of trying to find Canadian Tire in Mount Forest. He called it a ‘dinky little store’ that was hard to find but they had his vacuum in stock and that is the main thing. I took my Kobo outside and read a bit more until Peter and Linda arrived. Shortly before noon, I saw the fifth wheel coming down North Line.

I was in position at the fence and snapped a picture as they became visible to me. What I didn’t realize is that it was Linda driving! Wow! That is awesome! She is ‘being trained’ I think she said and as far as I’m concerned, turning into the laneway gives her an immediate TEN! It is a good idea for sure that we know how to drive the rigs, just in case. In my case, without anywhere close to the proper licensing, just enough to get the rig safely off the road. Linda is humble about it but should be very proud.
We all walked down to the Hangar and Bill showed off his little hideaway before we walked back up to the Suite. I had almost everything set out and sliced a couple of my tomatoes, put some lettuce out and Bill cut some cheese. Drink orders were taken, that was easy, and we made our own sandwiches on a bun. I have to admit they tasted pretty good. The seedless green grapes were a nice side.

We had a great visit inside in the a/c. Jenny, their pooch, slept on the floor after he and Clemson made acquaintances and Clemson eventually settled on the couch beside me. In the 3 hours of their visit, a lot was covered. Bill showed Peter some pictures of our winter trip and Linda showed me some of their daughter’s wedding pictures and inside pictures of their newly built house. All beautiful. Katie’s dress was gorgeous!

After a tour of their nicely renovated Travelaire, they made the turn in the gravel area and headed for home. I didn’t get a picture inside but it didn’t look like a ’93 with the white cupboards and black accessories. I really liked it.


With a long drive ahead of them to Peterborough we wished them a safe drive at 3:30. I don’t know why the day wore us out but we both came inside and stretched out on our recliners. Bill fell asleep and I read for a while before drifting off for a few minutes myself.

At 5 Clemson got his supper and NCIS was turned on. I took a walk down the lane after I finished my book. One Shot by Lee Child is indeed a page turner and I loved every bit of it. What a hot day it is out there, 84F at 6 o’clock. There was mostly just junk mail in the mail box and I was happy to get back in the cool air.

At 6, I started supper for us. Corn on the cob and leftover meatloaf was on the menu. The only things on the menu, in fact so it’s a good thing we both like them.

Supper was filling and tasty and dishes were done by 7. Bill and I worked on the Grey Bruce This Week crossword puzzle that came last week. Tomorrow, we’ll have a new one when the rest of the weekly flyers arrive. I went out at 7:30 and closed up the bunky for the night. I don’t want to take a chance that it won’t rain even with just a 24% possibility. The windows were wide open and outside doors. Back inside, I finished this post before moving on to the next book in my Jack Reacher collection on the Kobo.

This has been a great day, with some stuff taken care of this morning and a wonderful visit with Bill’s cousins this afternoon. Hey! They’re my cousins now too! I hope you’ve had a great day as well.

Thanks for popping in. Your comments are always welcome.

Posted by Patsy Irene (Chillin' with Patsy) at 6:09 PM