The Day After, Drive to Hanover, More Projects, Taking Care of Details, And the Sun Came Out

I was preparing myself to get up out of the warm bed by 6:55 and that turned into 7:10 on Monday, Sept. 24th. Today, I am another year older and still everything feels the same as I go through the awakening process. Phew! I didn’t want any drastic changes which just proves the point that it is just another birthday and we all need to celebrate them in one way or another.


Bill and Clemmy remained in bed as I got up and got dressed for my walk. “It’s very windy” Bill reminded me so I wrapped a scarf around my neck and headed out the door. I checked the outside temperature and it was 48F which was right on cue with what was expected overnight. 8C. I took my walking stick today for leverage, those gusts were quite strong. Not that it would blow me over but it would give me more ‘oomph’ if I needed it. There were a few areas on the way to and past Turbine Drive where the trees on the east side sheltered me and it actually felt warm.


It was another enjoyable 2 mile walk but no sunrise this morning. By the time I returned to the Suite, Bill was up and we both doubted we would see any sunshine today at all. The sky was solid gray. We had our tea and coffee and read up on blogs of our friends. Some had colder temps than us and others warmer. We got cleaned up and drove to Hanover this morning. We had a few stops to make, some for me, some for Bill.

On the way there, Bill set the cruise to 90 kmph and things were going fine until a little blue Chev pulled out behind us. This is a 20-minute drive, pretty straight forward with plenty of clear areas to pass other vehicles depending on the traffic. How many times do we all have those ‘jokers’ who need to ride less than 2 car lengths, sometimes even 1 car length behind us? Too often, we say.

There were opportunities for her to pass, yes, it was a female driving alone, yet she chose to just hang annoyingly close. The cruise setting controls the vehicle up and down the hills at the same speed, we all know that, but for those not driving on ‘cruise’, they speed up going down the hills and lag behind, going up. She followed us in this manner most of the way to Hanover and Bill was about ready to throttle her. I got her license plate, easily, she was that close, and snapped a picture through our back window. 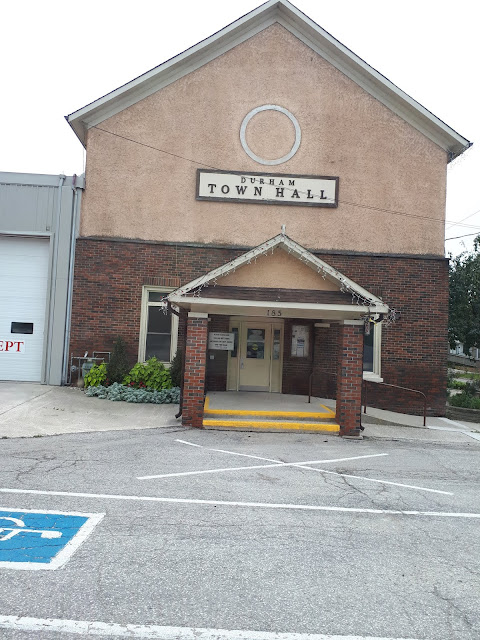 In Hanover, I asked Bill to drop me off at the mall with Dollarama and Giant Tiger. I was looking for a neon safety vest for my morning walks. Cheap because I am ‘el Cheapo’ here, in the flesh. He drove further down town to drop off the chain saw to get the blade sharpened so we can get into some serious wood cutting before we head south. While he scooted around to Rona for some plywood, I wandered through Giant Tiger and found some mini gloves and priced the vests at $10. Not bad but I’d seen some at the Dollarama in London for $4.

I walked next door but this Dollarama doesn’t stock all the same things and didn’t carry them at all. No problem, I went back to G.T. and picked the size best suited for me, that would fit over a jacket, and left with a smile on my face. I told Bill he’d be able to stand at the corner and see in which direction I walked now. 😊 I will definitely feel safer, being much more visible to country road drivers. I’m sure many already look for me, I see a lot of the same ones on a daily basis.

I found a couple of plain camisole tank tops for $3.50 (Bingo!) in colours I don’t have so scooped them up as well. I love Giant Tiger but really controlled myself today. I walked over to meet Bill at Canadian Tire, just across the street and he’d found the half Rubbermaid bin that he was looking for too. Success twice! We drove to Wal-Mart before leaving town and got some 2% milk as we’d run out before his Costco run on Thursday.

We both felt good about today’s purchases, oh, we also got a smaller truck container so it doesn’t take up as much room in the bed. The large one has already been designated for another purpose. On the way back through Durham, we did something we’ve never done before. We reported our tail-gater to the West Grey Police. He was a very pleasant detective and gave us some suggestions for next time. He gave us some satisfaction.

Back at home, I remembered that I didn’t have any bacon so cut up some chicken with eggs, onions, zucchini and pepper for an omelette sandwich. It was noon hour. Clemson even got some of the egg/chicken mixture. Bill went out to continue working on his wind screen for the Weber and I called Southside Grille in London to make reservations for dinner with our kids in October. Hopefully all 21 of us can make it this year!

I also went back and forth with Bill’s sister, Liz, about plans to get together either on Thanksgiving or later so we can see them before we leave for the south. We’ve made plans as well to drive to Fort Erie on Saturday to visit with Marilynne, Bill’s stepmom. Just a day trip but it fits in perfectly with ours and her other goings on.

Well, lo and behold, by 1 pm, the winds managed to blow the clouds away to the eastern horizon and the sky was solid blue now. Perfect! It was quite windy though so it didn’t warm up much more than 63F. I changed into work clothes and went out to dig up 2 hosta plants that are definitely in an unhappy place. I moved them up to the area where I dug the rhubarb from. I’m going to try them there since the ground is already worked up in that spot. With rain coming on and off for the rest of the week, today is a good day to get it done.

When I finished that, it was one of those ‘brush your palms back and forth across each other’ feelings. I’ve been talking about it for a while and now it is done. Hopefully, more of the hostas Rob gave me last year have found their happy place. Once I finished that, I realized that there was no point in moving inside when I was now feeling warmed. So, I primed our water pump and filled the watering can a couple of times and watered the rhubarb and newly planted hostas. Then, I got my book and sat outside for a while.


Bill drove back to Hanover after 3:30 to pick up his chain saw, they were busy earlier and couldn’t do it right away. No problem, for a minimal charge of $7 to sharpen the blade, he didn’t mind. The clouds rolled back in and it cooled off again so I moved to the bunky to read. 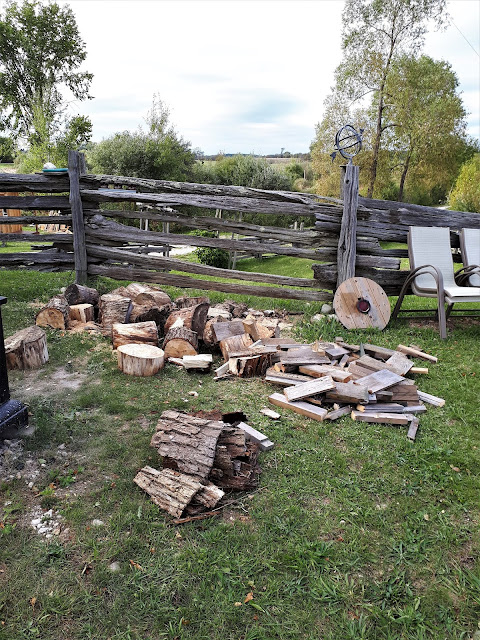 When Bill returned, he cut the shrubs and trees down at the corner where his cargo trailer and Hangar sit. It will make it easier to walk around and get through with the riding mower. He finished that, leaving a pile of brush and came up to cut some of the big log chunks that we’ve had from a tree chopped down a couple of years ago, I think. They are too big for our firepit. Bill made short work of cutting them into ‘bite-size’ pieces so now they’ll fit.

It was 5:30 and it was time to quit so Bill went inside and fed Clemson. I had had a break with my book so at this point I was gung-ho to pick up where he left off. I gathered and stacked the bigger pieces and then the small boards, raking the scraps of bark and sawdust into a pile. It didn’t take me long to get all the wood neatly piled and I came inside too. Another few things off the list of to-dos.


Just after 6, I started warming up the gravy, carrots and a few slices of beef in a frying pan. It didn’t take long to steam some corn and warm a couple of buns in the microwave. It was a quick tasty supper of hot roast beef and still there is beef leftover for another night. I have set some aside for Bill’s supper in London this week. One meal at least.

After the dishes were done, I downloaded pictures and worked on my post. As I write this, the winds have not dissipated at all. They are still gusting between 40 and 55 kph mark but it won’t be as cold overnight with 56F/13C. We’ll have to see if the winds change that but hopefully we won’t need added heat tonight. We’ll see.

This was another great day and now we are enjoying the evening together too. Thank you for popping in to see what we’re up to. Comments are always welcome.