On Sunday, Dec. 23rd Bill and I were first awakened at 6:40 when Clemson got up off the bed. I was already getting up but Bill is faster at getting dressed so he took him out. We were both pleased that he slept well through the night and this was his first movement. I continued to get dressed while they crawled back into the warm bed. It was a mild morning again, around 52F/11C so I left my wind breaker behind but slipped on my fingerless gloves.

I like to text Donna back home once I get out the door and we exchange weather and sometimes our daytime plans so these gloves come in handy. Today, I decided to walk out of the park through the east gate and back to the gravel road behind us.

It leads to the west, where you can boondock for free and to the south is the BLM 2-week camping for $40. I kept my eyes peeled for smooth rocks to paint, this area is abundant with them. I walked the road and I think I found Elva and Jerry’s set up, way back there. 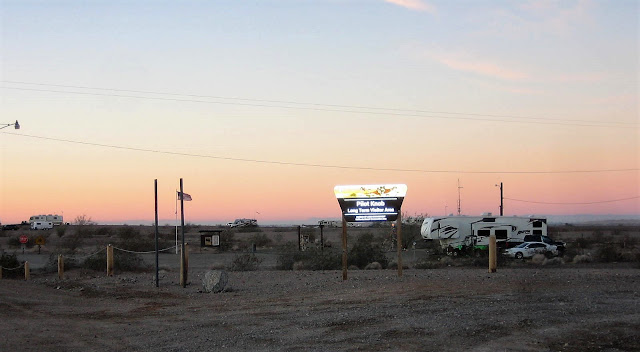 I walked to the BLM entrance 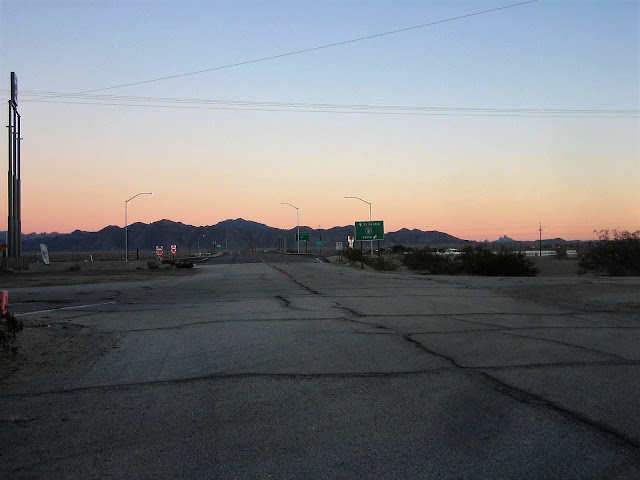 and then turned north following the road to the Chevron fuel station. You need a loan to buy gas or diesel here so we never do. 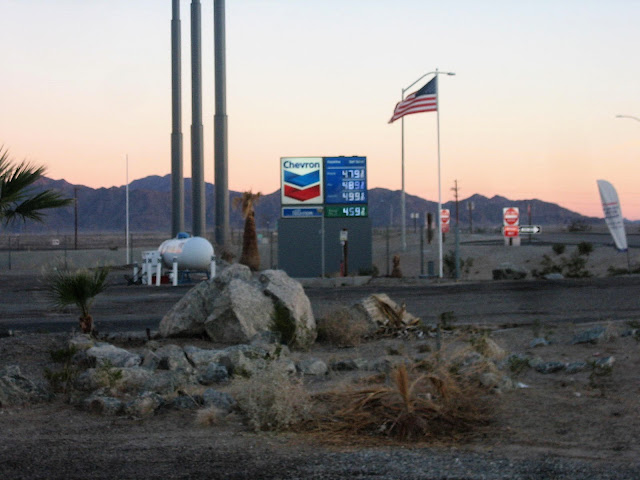 Back through the desert area I made it home 45 minutes later.

I could feel that walk in my upper thighs and it felt good. I even managed to walk 100 steps backwards on a flat area in the park to use those muscles. This is something Chatty Dorothy does and explained to me.

She hurt her lower back years ago and wears a brace. Her doctor suggested she walk, as per her usual, but the doc also recommended she walk backwards (on a straight path) for 100 steps, that it was equivalent to walking 500 steps forward. If you try it, you will notice that it uses different muscles in your legs and I find that for those of you who have a bit of a slouch, you tend to walk straighter with shoulders back. I am trying it most mornings.

We had our coffee and tea together while reading blogs posts and Bill caught up on our banking, reconciling our statements. Because our Sirius radio station is sporadic (at best) here under the tree, Bill found the Holiday music on the tv. A tip we picked up from Rob and Pat and it reminded us that Dad always had it playing on their tv in their apartment. We are after all 2 days before the big day and we’ve enjoyed listening to the seasonal tunes.

Since my Christmas cake turned out a little dry this time, I searched for a nice easy Brandy/Rum recipe for sauce on line. Then I divided the 2 loaf cakes into 2 serving baggies for puddings later on. When it felt like the right time, I fried up bacon and eggs for our mid-morning breakfast. That hit the spot. What a beautiful day this is, at 65F/16C before 11 am. Perfect! The winds are variable between 5 and 9 mph, just enough to keep us comfortable.

We finished dishes and took turns getting cleaned up ourselves. My ‘chore’ today was to cover my gray roots – again! I have vowed to do them before Christmas so today is the day that works for me. Bill moved outside with his laptop and Clemson to start working on a blog post. He said he’d be nearby if I needed some help applying the colour. I managed just fine and I see he did too as he finished his post today. You can check it out here.
I took a walk up to the front of the park with our garbage and part way there, the ‘tractor guy’ pulled up beside me. Asking if I had trash in the bags, he told me to drop them in the ‘bucket’. I’ve never been told that before but I put them in the scoop. I also asked him about picnic tables and was told why the sites don’t have them here. No worries, we’ll continue on without one, it just would have been nice to have a table to work on for different things.


On my way back, you know I had to stop and work on the puzzle. Since the one Pat and I had worked so hard on was finished, I put the first one I did away and got a new 1000 pc. puzzle out. It took quite a while to turn and separate all the pieces but eventually I got there and completed the border before heading back. I noticed Ron out so I chatted with him for a while, then Loree as she returned from doing laundry and continued home.

Inside the Suite, I finished making bundles with the cake and proceeded to mix up a batch of rum sauce. It didn’t take long and I finished just in time for the Ice Cream Social so we walked up with Rob, Pat, George and Suzie. Of course, I had a scoop of chocolate again with the fixings. Why not for $1? With the exception of our Blue Bunny no sugar ice cream bars, we have no ice cream in the freezer so this was a treat again.

Happy Hour, Bill took chairs down to Ron and Loree’s. I’d made up a new batch of Beer Margaritas earlier so that was what I took while Bill took a Zero Coke. We were sitting in the shade so I made sure to change into long pants and take a hoodie. It was a nice couple of hours, George and Suzie arrived later after having visitors at their site first.
Back home, we weren’t hungry right away so while waiting until a bit later, I hopped on the bike and took a spin around the park. The sky was putting on another spectacular performance for me. When I returned, we watched the tail end of Home Alone with Macauley Culkin. It always gives us a chuckle. Home Alone 2 followed it so since we’d never seen the whole movie, we watched it together.

I preheated the air fryer and we started cooking butterfly shrimp and French fries tonight around 6:30. When you’re cooking inside, time doesn’t matter as much. The fries and shrimp were delicious and only took a total of 25 minutes to cook. 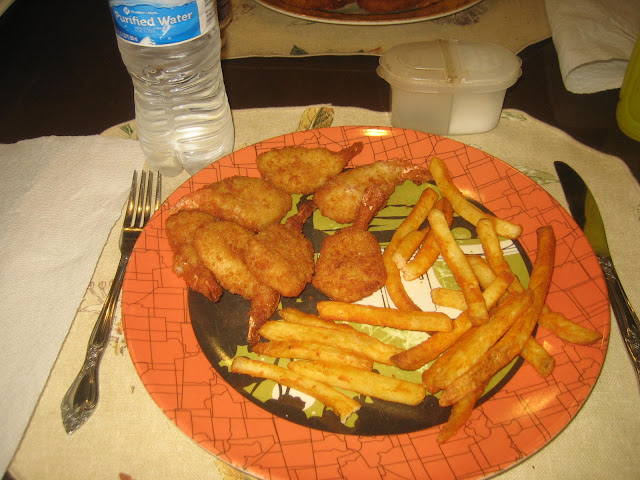 We decided to try the Christmas cake (pudding now) with the warmed sauce I made before emptying the dish water. Woops, forgot to take a picture. It tasted pretty good but Bill wasn’t crazy about the sauce. Next time, I’ll make a different one or use rum instead of the brandy I had. There is also a brown sugar sauce that I’ve had but never made. 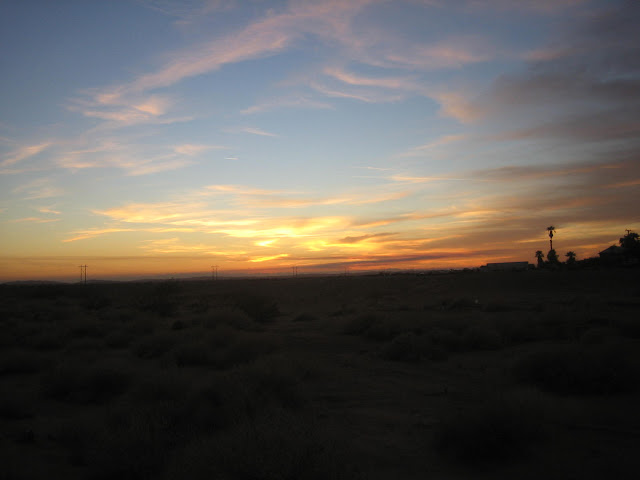 This has been a great day and I got lots of steps and bike rides in today. Tomorrow morning is Bocce Ball so I need to get a good night’s sleep. 😊 Thank you for stopping by today. I enjoy reading your comments if you care to leave one.

Posted by Patsy Irene (Chillin' with Patsy) at 7:18 AM