We both woke up to the alarm on Monday, Dec. 7th but I’m not sure if it was 5:30 or a few minutes later. Some days Bill is faster getting ready and is at Billy’s (where he catches a ride) too early so he may delay the alarm a bit. I heard the door squeak as he came up from his breakfast and was fully awake to get my goodbye kiss. I figured I’d leave around 8:30 for Durham so didn’t get up until just after 7.

It was supposed to be a decent day, as far as December goes, so I wasn’t worried about precipitation of any kind today. My windshield wipers had their covers on so wasn’t worried about having to deal with them being stuck. It was below 0C/32F so I was surprised that I had no frost to scrape. Bonus! I was ready to leave at the time I’d planned and caught glimpses through the clouds of the cheery sunshine up there to the east. 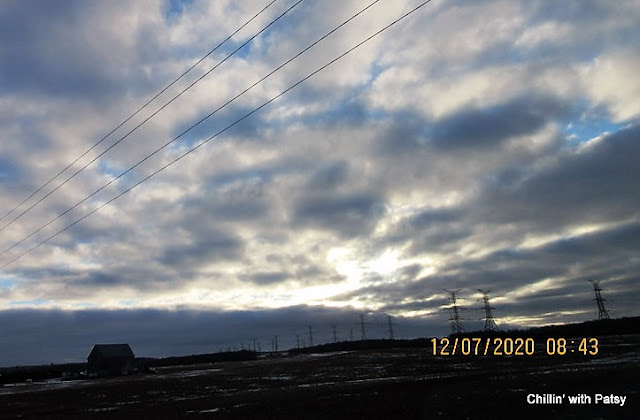 There were only 2 customers at the Mat this morning and with the dry pavement, I was able to do a thorough job of the floors this time. Dry and wet mopping. It was in tip top shape when I left. I didn’t rush and chatted with a nice lady I’ve seen a few times. She is very outspoken though and takes ‘guff’ from no one so I’m careful not to get her onto a subject that gets her going. Ha ha. 😊 She’s had some trials in her life, probably around my age, and I respect that.

As I came back to Hanover, I made one stop at Dollarama for some tissue paper and a Christmas box. Ours are all in the Suite, I didn’t think I would need them but no worries, you can’t beat the $2 prices. Of course, there were a few other little craft items and also more icing sugar which I was almost out of after mixing up the pesky shortbread dough. Speaking of which, Bill said that it has softened up so I should be able to roll it out this afternoon. He’s sure hoping!

At home, Wes brought the mail back and we got our first Christmas card. Thank you, Cathy! 😊 I noticed Susan was doing some baking so there was no rush to get my cookies going. I still may wait until after supper to bake them, we’ll see. I’d like to get a walk in and still need more stamps for Christmas cards and then that should be done for this year. Bill keeps thinking of someone else, which I’m glad of, but it means more than I originally had thought.

I came upstairs and because I’ve been noticing the ends of my hair are getting ragged, I trimmed about ½ to ¾” off the bottom. It’s pretty close to being even so I was happy. Trimming my own hair, no matter what style it is in, has never been something I’ve shied away from. It’s hair, it’ll grow if I mess up. Plus, there are hairdressers all over to fix things up! Ha ha

Bill got our Sirius XM radio set up yesterday so I found a country Christmas station and have been listening to seasonal music this afternoon. Nice that I can switch it off and on when I want. Oh! By the way, I did watch It’s a Wonderful Life last night and thoroughly enjoyed it. It has been years since I’ve seen it from beginning to end.

Funny part was, after putting the disc back in the case, I remembered that I’d received a colour version as well. I watched the whole thing in the original black and white! Silly me, but really, I’m glad I did that without batting an eye. 😊 I was awake enough to read a couple of chapters of my book after the movie before turning the light off at 10:30. I didn’t hear Bill come in at 11. At least I don’t think I did.

So, back to today. I decided to go down and get my cookies rolled out so did that and noticed that the oven was free. I put a total of 4 cookie sheets, 48 shortbread cookies in the oven at two different intervals. Susan and I watched them carefully so as not to overcook. The last 5 minutes is so crucial and then removing them from the hot tray quickly to set them somewhere to cool. They continued cooking!

Anyway, they turned out good and I’m sure Bill will like them. 😊 I learned of a new cookie that Wes and Susan like so offered them each 2 cookies sandwiched and suggested they put their own jam in between. They call them Empire cookies with icing and a cherry on top. After they were done cooking, cooling and in the containers, I cleaned up the dishes and went down to the post office. The Christmas stamps are all gone, ☹, so plain ones it is for the last of our cards.

It would have been a nice afternoon for a walk but there was a cool wind from the north so I’d have to bundle up. It was late by the time I finished everything so just returned home. I made a cup of tea around 4ish and texted Bill to see if he was on his way yet. Before I went upstairs, I unlocked the garage door for him. It was just after 4:30 when he came up to our room.

Pork chops and salad for supper tonight and maybe we’ll be splitting one of the chops. They are so thick and we decided last time it was too much. I’m working at cleaning the meat out of our freezer so we can buy fresh again, bit by bit. Call it a pre-New Years’ resolution, if you will. Bill had a bit of a lay down when he got into his comfy clothes so I sat beside him on the bed to read a couple of chapters.

At 6, I went down and seasoned 2 thick pork chops and sautéed them with onion and mushrooms. I added mushroom soup to the mixture and then set the chops on the trivet over that. 9 minutes cooking and they were done. We had coleslaw on the side, cleaning that up too. I believe they were the last chops in the freezer so that is good. We need to stop buying those ones, it is too much for one person but not quite enough for two. LOL

After dishes, we stayed where we were, watching NCIS until 8 and then we moved into the Games room to watch A Nashville Christmas Carol together. Because it was another different one, with a storyline like Scrooge, I watched it with Bill. It was on a week ago but W & S weren’t into it. No worries, it gives me a chance to watch one with my sweetie. 😊

Bill had his lunch made so we came upstairs at 10. He was tired and went right to sleep. I managed one chapter before I needed to do the same. By the way, the cookies were a hit. He had a couple and gave them a *star* through a crumbled mouth. Ha ha. That’s what I like! I’m so glad they turned out after all the worry over the dough. Maybe next time I won’t put them in the fridge for more than an hour.

It was a good day. Any clear, no snow, no illness, no accident, day is a good one.

Thank you for your visit today! I’m getting slower at answering comments some days but I do read them so if you’d like to make one, please feel free!

Posted by Patsy Irene (Chillin' with Patsy) at 3:33 PM