On Wednesday, Dec. 23rd we were both awake before Bill’s phone alarm went off. Just laying there waiting for his last day of work to begin. Then he was up and off like a shot. It was closer to 7 when I got up and went down for my tea. Leaving around 8:30 for Durham was the plan and a plan that came to fruition. Clear roads, cloudy but non-precipatory (my new word for the day?) skies meant a good drive.

It was quite the excitement at the Mat today and I actually missed it happening right outside the door! A Canpar driver had parked on the main street to deliver packages to Becker’s when 2 young people, male and female, hopped in his truck and sped down towards the laundromat. Making quite a wild turn, the female driver almost hit our customer vehicles but veered away and ended up on the front lawn of the house across the street. I didn’t hear a thing.

So, when a customer came in and told me the paparazzi in me had to go out and take some photos. The poor Canpar driver, although perhaps they shouldn’t leave their vehicles running, was going to be delayed. When I finished cleaning the Mat it was around 10:30 but I sat in Ptooties with a bird’s-eye view of the events before I headed out. I debated stopping and going into a couple of shops but with the town as busy as it was, I was just as happy to scoot home.

I took the back roads, which are all paved, again and was home within 40 minutes. I’ve got it down to a science now! I had my coffee, cheese, yogourt and pepperoni upstairs. Boy, was I surprised when I got a text from Bill at 12:45 that he was leaving Billy’s! I went down and unlocked the door for him. In the kitchen, I washed our morning dishes leaving the water in the sink for his thermos etc.


Around 2, I left my book with just a chapter and the Epilogue remaining, I walked to the post office. The mail box was jammed pack full! 3 Christmas cards, one with a nice package from Rita (thanks Cuz!) and a similar bundle for the landlords. That was a lot of mail and the kind we like to receive. 😊 I dropped them off at the house and then crossed the bridge to walk to the liquor store. 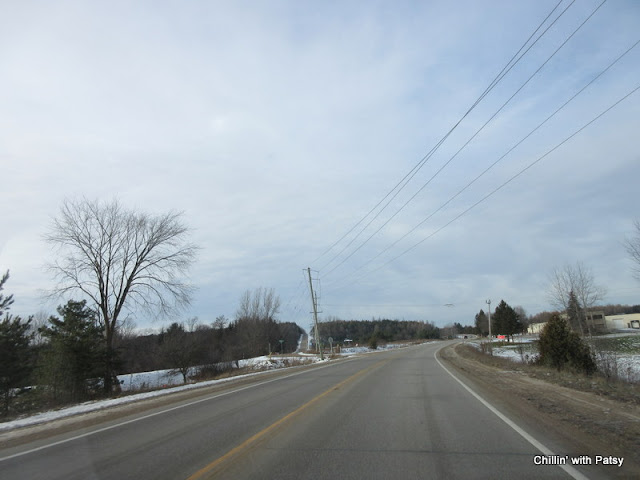 Bill needed his Appleton’s rum and I wanted a sipping drink. Eventually, I am making an appearance in the local shops here in town. People are polite and I quickly found what I was looking for. It isn’t a big store by any means but it has everything you need. I walked back with the wind whipping around me. It was a strong but mild wind and I debated going back out again for my walk. Guess what? I changed my mind and instead went downstairs and made the cranberry sauce for Friday’s dinner.

Bill was happy to be done work for the holidays and was tuckered out. After his snooze, we sat at our laptops while he worked on the bank statements and I fought to get into a website. We went a bit crazy with our data this month so it has slowed down from our usual quick speed. No complaints though, we still have unlimited, love our plan and no desire to switch.

I crawled up on the bed and finished my book. It was good but there was quite a lot of information that I felt not necessary. Too many difficult names to pronounce and too many characters to remember but as a movie? It would be great just like the 3 Bourne movies we’ve watched and loved. Bill probably won’t read it so it can be dropped off at the Barn Book Exchange. 😊

It was around 5:30 when we went downstairs to start supper. Just plain old cheeseburgers tonight. That’s funny because they are never ‘plain old’ the way we load them up. I skipped the bacon because we only have thick and it doesn’t taste the same on a burger. I fried them up and remembered to keep the label off the box we buy because these are the best ones I’ve ever bought. They are thick and juicy and delicious.

We had the last of the chocolate pudding and whipped cream for dessert while watching the London news. There was a segment about video recording a parent as they decline during dementia. Not to be mean or embarrassing, but for a personal memory. When I think of the stages Mom went through, I wish I’d thought to do that. I do have some videos of her from last summer and I’m so grateful that I at least did that.

After dishes, we did some online surfing and I sat on the bed to finish my crochet project. There isn’t much left, maybe 4 rows so I’d like to get it out of the way. Then, I’ll start the new book. This afternoon, at Donna’s request, I began an Avon order. I need to keep my account active so was grateful for her order. Too bad the system was so slow but at least it will be sent off on the deadline date.

This was a good day with a bit of excitement at work and some quiet days on the horizon. There is a weather system coming into south and mid western Ontario beginning at some point tomorrow, continuing until late Christmas Day.

It is mild enough to begin as rain but at some point will be changing to wet flurries and then accumulating snow. It could be a bit of a messy day to be out and about and we would like to do just that for a part of the day. It seems like a last day of freedom, aside from Christmas Day when we'll be staying put. We actually reached 5C/42F today which was pretty nice!

Thank you for your visit. Be good! Just 2 more sleeps!

Posted by Patsy Irene (Chillin' with Patsy) at 5:44 PM

Email ThisBlogThis!Share to TwitterShare to FacebookShare to Pinterest
Labels: excitement in the day
Location: Paisley, ON, Canada