On Monday, June 21st we welcome SUMMER! Although we have sure felt its appearance a few times over the last few weeks, now it is officially here. Now, we patiently wait for the next Ontario ‘unlocking’, provincially known as Stage 2. Will we be able to call it ‘Ontario unlocked’ (unplugged)? Anyway, on to today. Bill and Gibbs were up, outside for the pup’s business, and back in the bedroom before I heard anything. That was a few minutes before 6. I don’t know who was awake first. 😊

The forecast overnight was to be rain and some possible thunderstorms but we don’t think anything came until this morning. Like, 6ish. Bill didn’t have to drive anywhere today; the boys were working in Meaford so he got a lift with Billy. We live in the right direction this time. Because of that, he was able to crawl back into bed with us for a while and got up after 6:30. It was closer to 7 when I got up since I had to clean the Mat this morning. I was in no hurry. I figured with the rain, there may be an overnight visitor so by 7:30, she should be gone.

Bill left around 7:30 and I was just a couple of minutes pulling out after them. The weather was kind of ‘iffy’ but because their job this week is indoors, it doesn’t hinder them at all. It had stopped raining and the sun was debating on whether it would poke through the heavy clouds a few times on my way in and on my way home. I’d fed Gibbs early rather than make him wait until 9 for his breakfast and he did his business before I left. 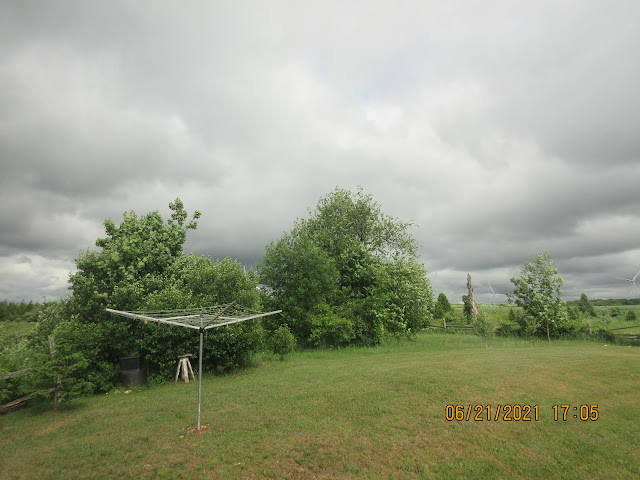 At home, I made my tea and we relaxed together. I wanted to finish my book and eventually did. It was so good, picking up with intensity the closer I got to the end. Those are always good ones. 😊 It was a good day for doing something inside and what better than baking? At 11:30, I warmed up my quiche and had some cheddar and olives on the side for my lunch. That, with a coffee, filled me up and I was able to move forward with my day.

Gibbs had been out for his walks and playtime on the rope leash so when I found him dozing off in different positions around the Suite, I slipped up for my shower. The scales are being kind to me over the last few days so I’m happy to be sticking to what I’m doing in the hopes that they continue. It isn’t a lot of weight that I’m looking to lose at all, just the belly fat. Bill is doing well too but his is mostly to all the activity he does on a daily basis.

I decided to make some Keto Butter Tarts, something I’ve never tried before. I never seem to get back to my success story recipes but I will, there are just too many to try! When I finished baking them at 3:30 (it’s 3:30 already!?) boy did the Suite smell nice. I guess I’m due for a cup of tea. We’ve had rain, nice rain, off and on all day and over the last couple of hours, the humidity has lessened and the winds have increased.

I think we reached our high for the day (23C/73F) this morning and now, after the rains, we dropped to a refreshing 16C/60F. We’ll need to pull our Arizona blankets up again tonight as it is dipping down to 5C!! Probably we’ll put the furnace on or at least, the fireplace for Gibbs. After my dishes were cleaned up, I emptied the dishwasher. It was time to run a load through to keep it primed. Since I finished my book, I needed to find another one to get lost in for a while.

It was around 5 when we heard Billy’s truck coming up the hill. Bill and I had discussed leaving their work cargo trailer here overnight while they are working in Meaford. There isn’t a really good spot to leave it at the work site and things are known to happen in small towns. ☹ It sure isn’t a problem here since Billy will be coming through to pick Bill up anyway. Gibbs heard the truck too so waited at the door for Daddy. I let him out with his leash trailing behind him.

We relaxed inside until 6 when I reheated the leftover hamburg patties and a bun for Bill. We had that with some of the macaroni/bacon salad. I say bacon because when I realized I had no tuna to add, I remembered I had real bacon bits. They went well and added the required protein to an otherwise carb dish. Supper was good and after dishes, Gibbs decided that he wanted to go out ‘again’. It is windy and cool but I put him on his rope leash for a little while.

I worked on my blog and realized that I didn’t have many pictures again today. That’s what happens when we stay indoors. We had a good day and when Bill came home, he wasn’t in pain (for once) but he was covered in paint. That was his job today at Papa V’s pizza place. 😊