On Friday, June 11th we were awake at 4:30 thanks to a small bark from downstairs. Translation: “I gotta go!” Bill got up and took him out. I drifted off and on over the next few minutes and wondered what they were doing when they weren’t upstairs by 5. Then they were. I had to ask Bill where he found the ‘new’ puppy from. This one settled down immediately! 😊

We all dropped off to sleep again and Bill was startled when he realized that it was 6:30. He’s usually up, washed, fed and almost ready for work by that time so he had to put a push on a bit more than usual. Gibbs and I came down as well and Bill and I left within mere minutes of each other. Pat had texted and invited me to stop around for a brief visit after cleaning the Mat so I responded “C u later”.

There was some disappointment when I arrived at the laundromat as Renee was asleep on the bench. She is the semi-homeless girl whom I’ve found a few times over the course of my cleaning job. I was pleasant in waking her and asked her to move on so I could clean. It was within 10 minutes that she was up, washed and moved on outside. When I left, 45 minutes later, she was laying outside against the building. Oh well, not my problem.

I went to fill our water jug and as I drove back through town, I saw her walking down the street. It was nice to see Pat after a month and a half but I couldn’t hang around too long as Gibbs hadn’t been fed yet. After 45 minutes, I found my way home. No problems with the little guy today so I fed him and we went about our day. I didn’t have a lot going on but there were a few online things I took care of while having my tea.

It was close to 11:30 when I put Gibbs out on his leash, after a few times of taking him out for walks, that Bill drove up. Gibbs was all excited when he first heard and then saw Black Beauty. We came inside after a bit and had our lunch. A wrap for me and Bill ate the sandwich he made last night. Bill had a snooze up in the bedroom so I left Gibbs asleep downstairs and went out to clean up the rocks that the rotor tiller left behind. That was over 2 weeks (?) ago!

Bill came out and suggested that I wait until he got the wagon on the back of the mower to pick the stones/rocks up. We want to dump them at the inner point of the corral for another project we have on the agenda. There are too many to count, projects, I mean. I raked and got them into piles with the grass and dirt removed. It was hot down then and I moved up into the shade.

Bill had hopped on the rider and cut grass all around and in the back field before he stopped too. At a few minutes before 4, a paying customer for Bill’s pole saw pulled in. I wish I had my camera because Neil had his 12-week-old Aussie-Doodle with him. He was about twice the size as Gibbs and they bounced around each other for a while before the Aussie got a bit too aggressive. Just playing but it spooked our little guy. Bill and Neil made a deal with the saw and they left.

My sister, Wendy and niece, Morgan drove in a couple of minutes later so they got a double whammy of a dog fix. Of course, they loved our new family member. Bill and I loved the sheepskin for Jazz too. We had a nice visit, and it was quite comfortable outside now, after the rain. It was close to 6 when we said our goodbyes and our company headed back to Owen Sound. I couldn’t believe the difference in temperature in a matter of 30 minutes. I actually felt chilled.

We had grilled cheese sandwiches for supper and cleaned up the last of the strawberry rhubarb. I felt very full and that just didn’t make sense since I’d not eaten that much during the day. Gibbs had been outside a lot during the day so it was not surprising when inside, he moved around to different places to sleep. He was worn right out! Daddy home early, fresh air, meeting a new aunt and cousin not to mention touching noses with another puppy. 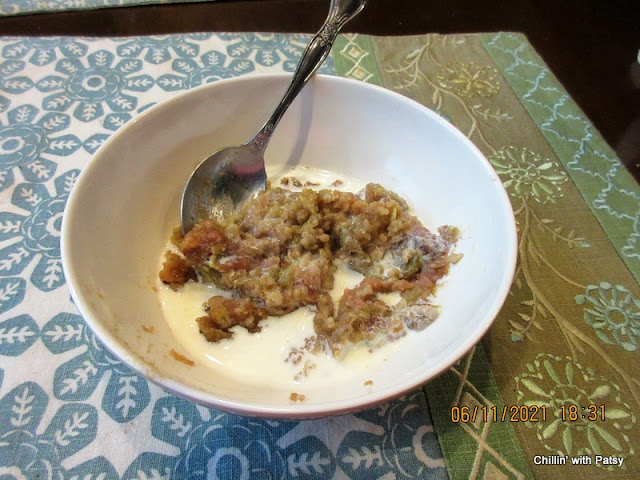 We did dishes and watched a movie together. I couldn’t keep my eyes open but I managed to get my blog written at least. Not too many pictures were taken so I may take some in the morning before publishing. 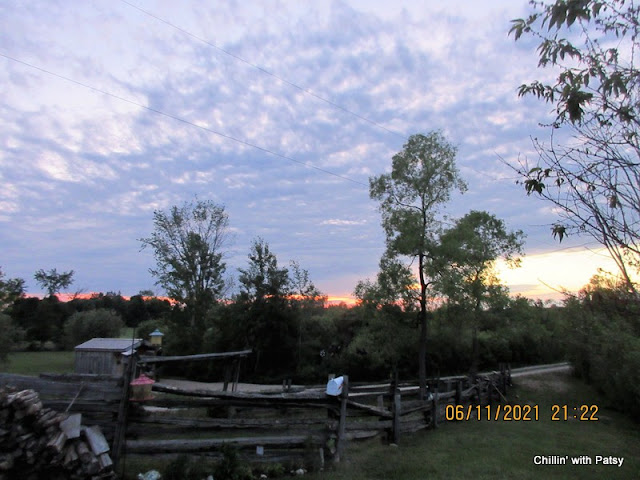 Posted by Patsy Irene (Chillin' with Patsy) at 8:29 AM