Sunday, June 13th, that is what today is. Hard to believe that the weekend is almost over. Bill said today “sometimes 2 days off just isn’t enough”. Hmm, methinks he is getting closer to retiring for the second time. 😊 He didn’t sleep well again last night, if it isn’t one body part, it’s another and his late night did nothing to help him drop into a deep sleep.

We were awake just around 6 am and little Gibbs hadn’t made a peep. He was up as late as his Daddy – well, he slept on the floor not in his crate until 11:30. He was pretty good up in bed with us until 7:30 when I pushed myself to get up. I had a laundromat to clean, clothes to sort and laundry to take care of. I didn’t want my morning to go any faster than it was already going to. I left for town about 7:45.

With just two customers to start, 2 washers were being used and then my 2. A young couple came in and managed to use 17 washing machines leaving 2 available for anyone else coming in. Wow! Who has that much laundry? I don’t know, there could be an interesting story behind that! 😊 I’m just glad the one lady took her wet clothes, as did I and the man had finished drying his clothes before they needed dryers. I’m sure they took most of those as well. Good revenue today, Jamie!

I left there and drove across the street to fuel up and then a quick stop at the bank to deposit my earnings from the last few weeks. I like to build it up before depositing it so my account takes a nice jump all at once. Ha ha. It makes me feel better than putting in $100 here and $50 there. I made my tea and then went to hang the clothes on the line. It’s a beautiful morning with full sun and a slight breeze. Perfect for drying laundry. Back in the Suite, I worked on finishing my blog.

Bill went out to hook the wee trailer to the riding mower and we picked up the 4 piles of stones/rocks I’d gathered. Loading the small trailer and then hand bombing them back out over the corral fence to where we want them. More back breaking bending for about an hour. Gibbs watched and supervised from his position on the patio. He was quiet for the most part. He seems to understand “I’ll be right back” now and waits patiently, almost in the exact same spot unless he needs shade and then he'll move. 😊

With that job done, it was 12 noon and since Bill had cereal earlier, we debated lunch. Neither of us felt like bacon and eggs and he wasn’t that hungry yet anyway. I made myself a creamy coffee which would fill the gap and then at 2:30 we had cinnamon buns. Pillsbury ‘to die for’ – ‘bad for us’ cinnamon buns. Yup, you heard me. They were delicious. The way to Bill’s heart is definitely in this format. He loves the creations of the Pillsbury Dough Boy. 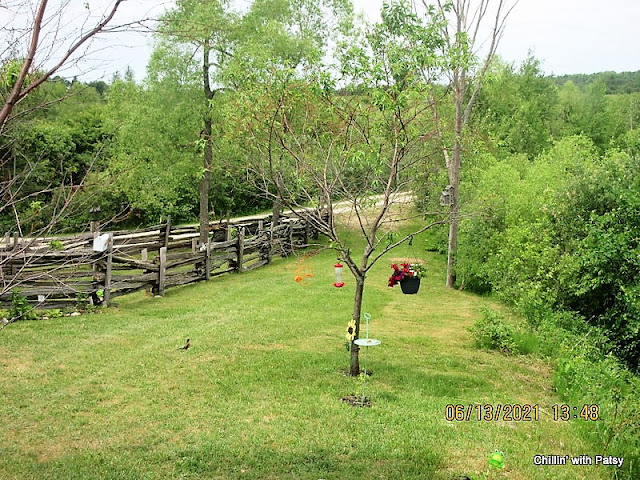 From his poor sleep last night, he was out for the count and slept in his chair for almost an hour. I did the dishes and then started bringing the clothes in. That’s where he found me when he woke up and we finished together. Then I left the two of them while I went out with my book and soaked up some sun. I tried to read but the sun felt too wonderful so I closed my eyes and probably napped too.

The sun was quite hot so after half hour, I moved to the shady hammock and soon they joined me. One thing you can say about us, even though we can work with the best of them, we sure know how to chill. 😊 Later, Bill went to the Hangar and took our patio umbrella down with him. Hmmmm. I don’t know how someone can solve so many issues but I call him my Miracle Worker.

I thought it was non-repairable and it seems many of you had more faith in him than I did. I’m thrilled that when he brought it back up, it opened up like it should and you’d be hard pressed to pick out which rib was broken if it wasn’t for the 4 screws in the new piece of metal. LOL My hero! He managed some time for his hobby and worked on his plane for part of the afternoon too. At 6 we talked about supper. It wasn’t necessary to have a big meal so we just munched on chips and cheddar and he went back down until our program, Why Women Kill, came on. The new season and we get a chuckle out of it.

At 6:00 we also turned the a/c off and opened windows. It was a nice 23C/73F and the breeze coming in the windows was all we needed. The days ahead this week will be similar so hopefully we’ll be using some solar power. This was a lovely day; I wouldn’t change a thing. Tomorrow, I will be working at M’s for 3 hours so that will be a nice change too. I’m hoping for an Owen Sound day on Tuesday – you can guess where I’m going!! I hope you enjoyed your Sunday too.

Posted by Patsy Irene (Chillin' with Patsy) at 8:08 PM