On Thursday, July 29th I woke at 6:33, exactly the same time as yesterday morning. Twilight zone or what? Donna was up already but just recently, I think, and was doing her exercises. I did my stretches in bed and crept upstairs so as not to disturb my sisters. Gayle and John have a full basement with 3 bedrooms and a bathroom. Our room has patio doors out to the back yard and deck area. It is quite comfortable. Upstairs, is another bathroom, a large open concept kitchen, dining, living and tv room and their master bedroom with ensuite. Plenty of room to house guests.

I opened the curtains but didn’t open the door since it was raining. Darn, quite steady too. The forecast was not in our favour for an outside farm tour, which we’d planned for around 10 am. We had our morning drinks and I focused on finishing another late posting from the previous day. The Scrabble game was on-going but it was obvious Donna was taking the award, spinning wildly ahead of us. 😊

Wendy arrived shortly after 9:30, as planned, and we decided to go down the road to Gibson’s bee/farm anyway. Pam and Derrick have a little store that at the very least, we could peruse. What a treat this was! The weather was not appropriate for visiting their 450 honey bee hives, they are only happy on sunny days. Derrick explained that they would be grumpy and it would be a bee explosion if he opened the hives today. We sure didn’t want that so will do that on another visit. 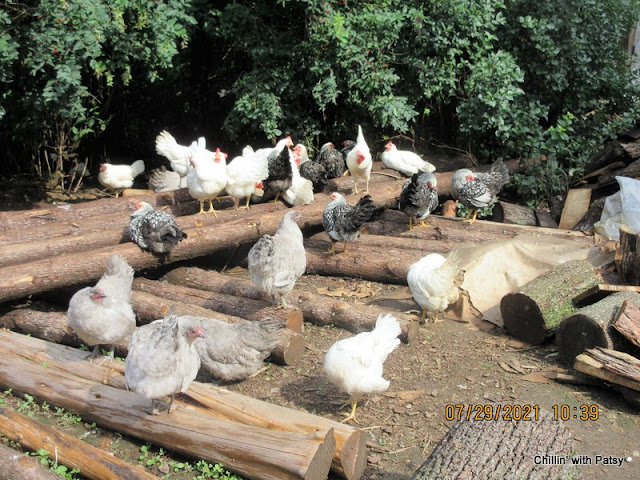 However, it had stopped raining by this time and was heating up enough to dry things up quickly. This meant we could tour their small farm. My older sisters and I were initially raised on a farm so I guess a part of that remains in the blood. Wendy loves animals so she enjoyed it as well. Lots of chickens, a stately rooster, Silkie chickens, Kunekune piglets, which we’d never heard of, a small herd of goats of all ages, one lone cow and two hungry Alpacas greeted us. 😊 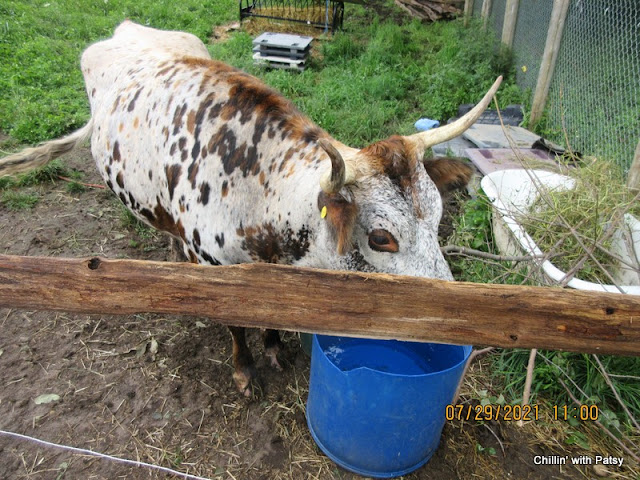 This was so much fun and when I picked up Potato, a 2 or 3-week-old ‘kid’ goat, I fell in love with the little sweetheart. Oh my. I’ve never held a goat before and it was a real treat. The Alpacas allowed us to feed them out of our hands but Pam said they didn’t like to be petted. Only because they weren’t raised to be touched from birth. She seems to have ‘inherited’ a few of these animals and has names for the obvious ones. 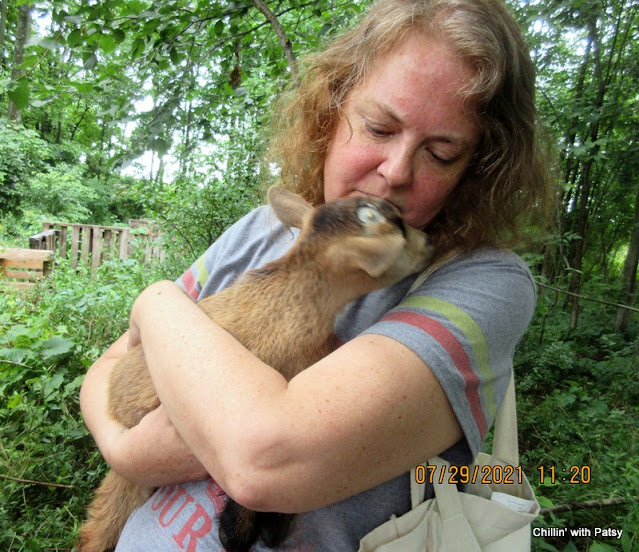 We did some shopping in their store before heading back home. I drove today. Once more, our lunch feast was set out and after clean up, we waited the arrival of Heather, our teacher for the art class. This is hard to explain so simply I will say that it is canvas painting with personal picture attachments. Gayle had us set up to take the class on the deck under their pergola and it was perfect in the fresh air. After a bit of confusion on exactly what and how we were arranging our own personal pieces, we were off and running. 😊

I know that each one of us was thrilled with our finished picture but I can’t show them since a few of us made them as gifts. The pictures are some that Heather took for me of ‘work in progress’. We all really enjoyed testing our creativity and will definitely put the new knowledge to use on projects of our own at home. Heather is a patient lady, a friend/neighbour that Gayle met on her morning walks. How lucky is that when we were looking for a craft project? 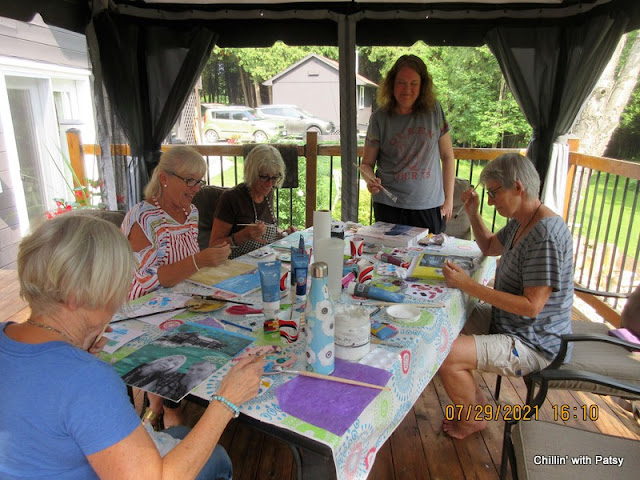 When she left around 5, we took mine and Wendy’s cars down the road to Rockford Diner. This is another restaurant that we always have good food. It seemed different this time, new owners perhaps? The meals were still very good and I slipped out of my comfort zone and ordered Fettucine Alfredo w/shrimp, something I don’t make at home because we try not to eat too much pasta but also because Bill doesn’t care for it. One thing about it, is how filling it is, so half of it came home with me.

We said goodbye to Wendy and returned to Gayle’s for the evening. Some had some wine, but I opted not to tonight. We had finished our Scrabble earlier so worked on an on-going crossword and then played Euchre. Tonight, it was Gayle and my night to take the win but only after a rubber game. It is always fun and us being so tired made it even more so. We were in bed shortly after 10 and I read a couple of chapters of my book before turning off the light.

This was yet another fantastic day! Thank you for stopping by.

Posted by Patsy Irene (Chillin' with Patsy) at 7:32 AM