A Little of This, A Snippet of That

On Saturday, Sept. 4th, Bill was awake before his alarm at 5:45. He took Gibbs out and the little guy and I snuggled up again in bed until 6:30. Bill was taking his cargo trailer to London for some rc flying at Forest City Flyers, of which he is still a member. 😉 He’d informed Ken and Keith that he was going just in case they were free to meet him there. Either way, he was going flying!

It was still a bit dark when he left and I wasn’t even out of the bedroom yet. I did catch him pull out from the Hangar so snapped a picture. I was thinking I would sit with him for a while but that didn’t work out. Gibbs and I could have walked but since I was up so early, I made my tea and relaxed instead. Well, we never did get out for our walk down the road but that’s okay, we did enough ‘piddle and poop’ walks through the day!

Inside, I was debating what to do today, on the fun side, since there wasn’t much else. The place was clean, the outdoors stuff that I do was done, so I walked out to the Bunky hoping an idea would come to me. Oh, first, I walked out across the back field to see what Bill got into when he cut the lawn yesterday. He suggested that I take a walk to see. Hmmm, remember him getting stuck? Yah, well, I was tentative about what I’d see. 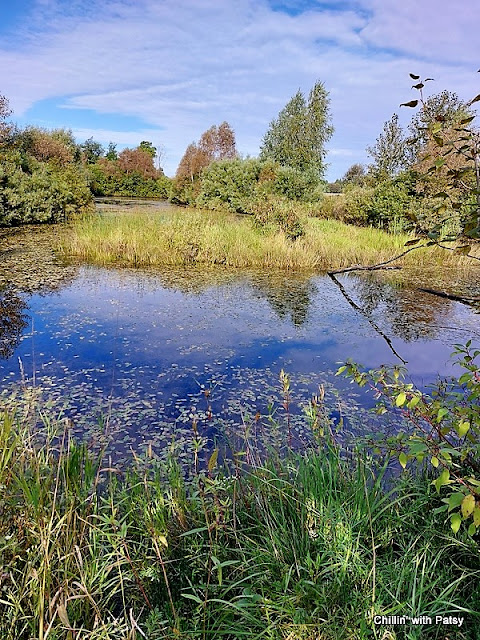 It wasn’t bad nor did it surprise me at all. Of course, he has a nice little area that would be perfect for tent campers but he also has another new area of long grass cut back. LOL As long as I don’t have to help pull him out, let him have his fun. I won’t listen to him grumble about ALL the grass he has to cut when he continues to add more. 😉 The walk helped me to make a choice about what to do. 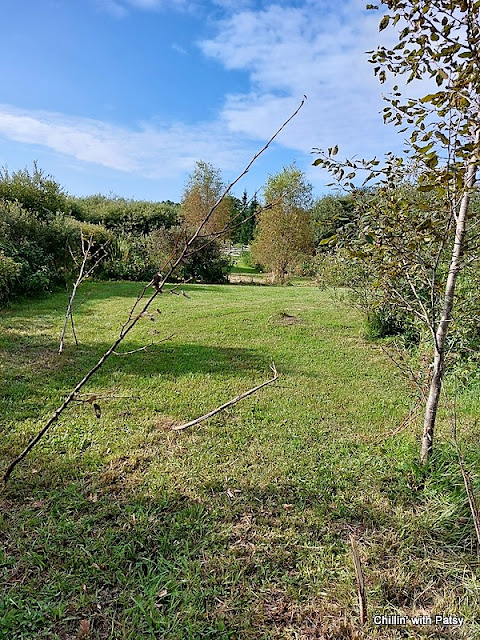 I decided to paint my large canvas. It has faded since I picked it up around the corner 4 years ago and want to give it some life. I’m not a painter. Rocks are small and I manage to put some personality on those BUT a 3’ x 3’ canvas is a different kind of commitment. It didn’t cost me anything so I guess I’ll start with that attitude and not worry about perfection.

I left Gibbs inside so I could concentrate on what I was doing and didn’t have to worry about where I set up my paints. 1, 2, 3, I just dove into it and when it’s finished, I’ll show you – maybe – if it turns out. 😊 I left it to dry around noon and came in at noon to have a noodle soup for lunch. That’s the best I could do and it was good and filling with my coffee.

Bill called at 1 o’clock to let me know he was on his way home. To me, that meant disappointment. Maybe no one else was there to encourage a longer stay but he informed me that wasn’t the case. The winds in London had picked up and even though both friends had arrived, they had left. Seems like a long way to go for 4 hours of flying, BUT that’s my thought and I’m sure he was happy to get that time in with his big plane. I’m glad he got away.

Then Gibbs and I went back out after chatting to Bill. It was quite a lovely day. Not cool at all, so I tethered him to the picnic table. Close enough to see me, yet far enough not to get to my stuff. He had shade for when the sun was out. He is getting much better at responding to my ‘Go around’ advice when he gets wrapped around table and chair legs.

I changed some of what I’d painted earlier, the ‘artiste’s’ prerogative, but only the colour, trying to make it look more realistic. I’m not sure it made a difference. Just when I thought I’d be able to finish the basics, I felt light rain drops. Oh-oh, there was a darker cloud overhead and I had a lot of stuff out to put away, including the painting AND a small dog. I packed things up and put it the Bunky, bringing Gibbs inside with me. You know that the rain stopped then, don’t you? Murphy’s Law.

Earlier, I’d gone online and ordered shower gifts for Krystal, Bill’s 3rd daughter, from her Registry and was happy to get them at Walmart. We don’t have a lot of choices here without driving to Owen Sound and it’s nice to avoid that drive too often even though it is only 40 minutes. Gosh, listen to me! We used to drive almost that across the city of London from one place to the other, often daily. I guess our interests change after retirement.

I started a new book after finishing Mitch Albom’s last night. This one is another new author, Phaedra Patrick. The book is called Rise & Shine Benedict Stone. It just sounded interesting and the cover was interesting. 😊 I got into it really quickly as Gibbs sat with me for a while in our chair. Bill got home around 4 and got his trailer backed into its spot by the Hangar. Neither of was very hungry, he’d eaten his packed lunch on the drive home and I guess my soup filled me too.

Supper was just leftovers and Bill had the mac and cheese and I had some spaghetti. I still couldn’t eat it all so put half back into the fridge. After dishes, Bill went down to the Hangar and I worked on my post and watched some of Horton. It used to be called Horton Hears a Who. Yah, you read that right. I remember watching it with my children when my children were young. The original was released in 1970 and this later version, just called Horton, was re-released in 2008. I don’t know what is different.

Anyway, a good day and a quiet evening in front of a children’s movie and a book. Nothing better! Ha ha 😊

Thank you for stopping around. Your comments are welcome!

Email ThisBlogThis!Share to TwitterShare to FacebookShare to Pinterest
Labels: little bits of this and that
Location: Priceville, ON N0C 1K0, Canada