Demolition Derby – But, Not Really

On Monday, Sept. 13th Bill was up for work at 6:30. Gibbs and I remained in bed until I had to get up a few minutes past 7. The Mat needed cleaning today. When Bill pulled out, Gibbs and I watched him leave and then I fed him. He is very hesitant to eat when he sees me with shoes on so I try to act nonchalant until he finishes. 😊 He is really good now at taking half of a soft milk bone to ‘look after the house’. He takes it and moves away from the door.

The laundromat was one of those typically ‘dirty’ days. The Lost and Found box was full again with someone’s laundry loads so I just pushed it down and closed the lid. Good grief. I walked around and picked up the big garbage and went about the cleanup. All of the “Woops, I Goofed” notes that I put out were gone and two were used on machines that worked just fine when I tested them. LOL So, I left there, filled our water jug and then dropped off the bags of L & F clothes at Rethreads before returning home. 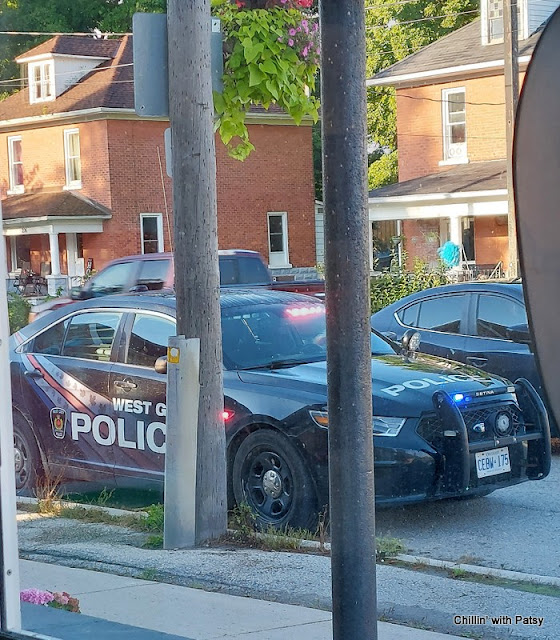 It was then that I noticed my sister, Cathy, had texted me about the demolition of the Paisley hotel. She wondered if I was going over to watch it. I Googled it then, as I knew nothing about when that was happening. 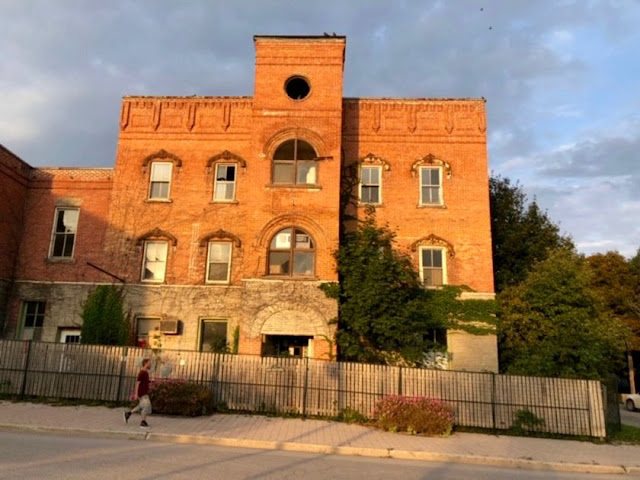 If you remember some pictures from last winter, the Inn/Hotel was in a lot of them. Its turret was a pigeon’s roost so they will miss that gathering spot when the building is gone. ☹ Neither Cathy or I could find a time when it would happen, so we both decided to head over.

Gibbs would enjoy a car ride so by the time I loaded his bed and got his seat belt on, it was 10 o’clock. When I approached the small town, I immediately noticed the turret was still standing and the main street was not blocked off. Hmmm. 😕From the front, all I could see was that in the last 6 months many, many trees and vines had grown, almost covering the lower level of the Inn. You’d think that would be the first thing they’d remove.

On a secondary street, behind the hotel, I met Cathy who was driving around wondering what was going on. We asked a couple of townspeople but they didn’t seem to know anything definite either, other than a dedication and brick presentation to the mayor later this evening at the Cenotaph. Another hmmm. 😕We parked our vehicles and took Gibbs for a walk around the block and I was able to show Cathy where exactly we lived last winter. They’ve been through town many times but couldn’t find Wes and Susan’s house. Now she knows.

After parting ways, Cathy walked to Main St. to get pictures of the century old building ‘pre-demo’ and I drove over to see Susan. She hadn’t met Gibbs yet. We visited outside for about 15 minutes before Gibbs and I headed for home.

The day was a warm one after a cool 11C/51F and it warmed up to 20C/68F before the sun disappeared behind clouds. I had unplugged from electric before we left but was pretty sure the clouds would play a part in reversing that before the end of the day.

It was 1:30 or so when we got home and Gibbs napped for a straight 2 hours without moving. 😊 That ride wore him plumb out. I had a fleece jacket on the line that I’d washed in one of the machines today (testing them) so took the little sleepyhead out with me to collect it.

Slipping it on, we walked down the lane to get the mail and then continued to wander around the front field. I let Gibbs lead and he sniffed all the edges of the field, venturing down through the long grass on occasion. 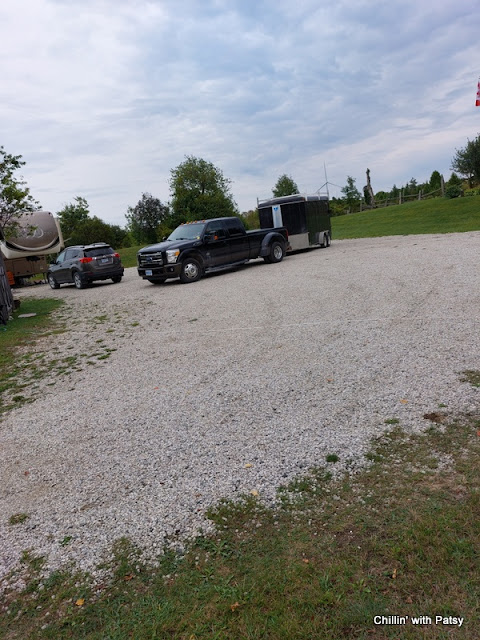 That’s when Bill got home, pulling the work trailer. For supper, he had leftover mac and cheese with a couple of frankfurters and I had the leftover bowl of chili. We cleaned up the homemade bread while it was fresh and didn’t need dessert. Bill made his lunch and we plopped ourselves in front of the tv for the night.

This was an interesting day and a good one. I’ll keep an ear out for when the Paisley Inn (original name = Rowes Tavern) goes down. Even as rubble, it will make good pictures.