Sometimes I Let Things Get to Me

On Wednesday, Sept. 29th I’d planned my day to be pretty busy. When I saw the sky clearing up from the wispy clouds, I was sure it was going to be. Bill left for work and by 8, I drove to the laundromat for cleaning. It was the bright spot of the whole morning when a young boy of about 10, who was waiting in the parking lot for the bus, walked back to me and said ‘Good morning’. I was baffled, to be quite honest, replied and then wondered if he needed something.

If he was just being polite, I didn’t want to discourage it by saying ‘Can I help you with something?’ So, I asked my question the only way I could think of. 😊 ‘Are you just being friendly or is there something you need?’ LOL, it still doesn’t sound right but he smiled and said ‘I’m just being friendly’. I laughed and said ‘great! That is so refreshing, thank you!’ That was it, but such a small thing is what I look back on this morning because it kind of went to pot after that.

As soon as I entered, I was picking up rags, dryer sheets and ‘crap’ off the floor. One customer was in finishing his laundry and after pleasantries, I walked around eyeballing machines and opening the washer doors etc. I stepped into the bathroom and there it was. Scads of t.p. crammed in the bowl and when I went to flush it, I realized that the handle was broken. Oh, for crying out loud! The plunger didn’t help much so I made up Out of Order signs for inside and outside of the door.

I went about cleaning, frustrated and found that a full garbage bag of clothes and Christmas decorations had been left in a back corner. After texting Jamie about the toilet, I carried on. I deduced that I would take the bag and a 4’ long canvas, to Rethreads like last time and hope there wasn’t too much garbage inside it. When I was ready to sweep the floor, Jamie walked in.

Sometimes, I get discouraged over the Mat and sometimes it is for the wrong reasons. Things need to be fixed and kept on top of more often but then I realize that it all takes $$ and time. Jamie has to rely on others to fix appliances and if parts are not available, the business suffers. He tried to do a simple fix on one of the washers but it was obvious it needed the Appliance Doctor to replace a part.

We chatted some and talked about a temporary fix for the washroom (close it off, is our thought) so that some of the same irresponsible individuals don’t add to the problem. We didn’t come up with much other than a new latch with a padlock for employees (me & Jamie) to use only. But what other damage would they do? The police officer, Constable Hinton (?), that was parked out front last week was there again today. His appearance keeps traffic slow around school bus time. 😊

Before he left, after walking his town beat, he popped in to say hello and ask how things were. We discussed the ‘overnighters’ that we know of and then he suggested that we send him a video of last night’s visitors re: the toilet. Jamie and I watched one on his phone and there definitely was a questionable visitor, first at 10 and then at 1 am. ?? He knew the cameras were on so we had a hard time figuring out what he was up to. It definitely wasn’t laundry.

Anyway, I left there with much discouragement in my head and heart and drove home. It was 2 hours after I left the Ridge. Gibbs met me at the door and I was brought down even further. He is always so good and does NOTHING! Today, he found a corner strip on the slide-out carpet and just kept pulling and chewing. Little pieces of the carpet were evidence of his misbehavior. ☹

Needless to say, I didn’t take him for a walk as I usually do. He went out on his rope leash and remained there for a good long time. It’s like sending a child to his room and the room is full of all his toys. Gibbs loves it out there and I had flashes of bringing his crate back inside for our outings. I really don’t want to resort to that, plus his size could make that a challenge now.

While he was out, I swept and tucked the pulled piece out of sight under the carpet edge. I pulled the plastic runner, that we put under our chairs and table, over to the edge and placed small scatter mats under each edge where our chairs sit. I was feeling pretty frustrated but I know not to keep on at him, ‘after the fact’, they have no memory of what they’ve done wrong after a certain length of time. I read or heard that somewhere.

I keep a pretty constant eye on him to make sure he is safe out there and he can’t go far from the patio. I puttered around inside, filled our pill container, doing dishes and having my lunch. I made a packet of Cream of Leek soup and it was really nice for a change. Low carbs, so right up my alley and there is enough for at least 2 more bowls. Then I let Gibbs in and he slept in various spots on the main floor.

During lunch, I finished my book. Maggie is another one of those 5* books for me. I loved it, the evidence of that is how quickly I finished it. I’d originally planned to come home from town and get out to cut some plants but that went down the tube when my mood did. There’ll be another day for that. Gibbs and I walked to the mailbox and I got another birthday card, this time from my sister, Cathy and her husband. Thanks, you two!

The day isn’t as warm as I expected so I had no regrets about not being outside much. It would be fine for working in the dirt, but………you know, another day. 😊 I started writing my blog and of course, that means a long-winded blog posting. Sorry about that! With Gibbs inside and hopefully staying out of trouble, I hopped in the shower. When I was in there, he started barking and Bill walked in. I’m glad he is the only one with a ‘key’.

For supper, we had fried mini sausages, fried potatoes for Bill, mixed veggies to share and I had cauliflower rice. It was all very good and a complete switch from what I’d originally planned. I had my days mixed up, thinking today was Thursday already. Rushing the week! After Gibbs had his supper, I took him out when he rang the bell. We went up the hill and I noticed the neighbour’s cat on the fence first.

Gibbs has never seen a cat before, I don’t think, and once he spotted it, he stopped in his tracks and started barking. The cat was not afraid of him at all and just stared before moseying along the fence rail. Nothing to chase here, I turned my wild protector back to the Suite. It wasn’t a productive walk so I know I’ll be out again with him soon. LOL After dishes, we sat and watched some of our recorded programs from Monday and Tuesday. A fairly quiet evening. 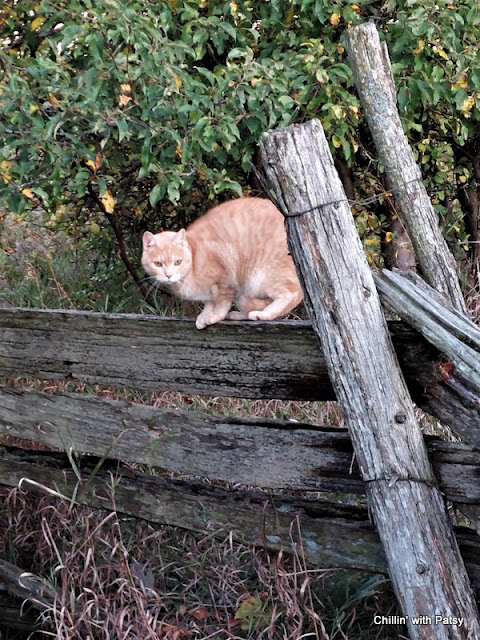 I chatted with Bridgette during meal preparation about books on Libby.com and got a better handle on how it works. I was happy to borrow the book Nomadland, that she recommended, a story about full-timers who have turned to the lifestyle for one reason or another. Some good, some sad and others out of necessity. This was an okay day, once the morning was behind me! 😊

Posted by Patsy Irene (Chillin' with Patsy) at 6:41 PM

Email ThisBlogThis!Share to TwitterShare to FacebookShare to Pinterest
Labels: the upside down morning
Location: Priceville, ON N0C 1K0, Canada