Winterhaven, CA
Thursday, Feb. 6th brought us a change in temperature, a change in winds and a change in luck. We were up by 6:30 (ish) and Bill was on the phone almost right away after making his coffee. He took care of voice contact (yesterday’s was by email) with our insurance company, our dealer to make an appointment and then with the claims department. While he did all that, I slipped out for a nice walk. 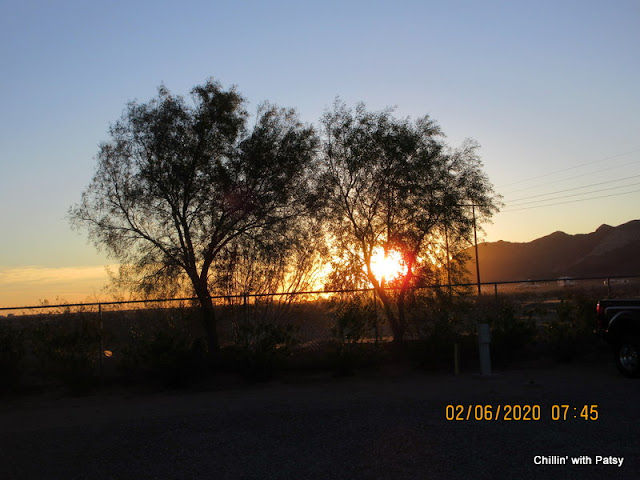 It was cool, at only 47F but with no wind, it was very nice. Back home, I made and drank my tea while Bill had his shower. When he was done, I hopped in for mine and we each had some Cheerios.

By 9:15 we were walking to the gazebo area for Bocce Ball with Gordon and Barb. There were 16 of us which meant two full courts of players. That was perfect! Their second court is a little rough around the edges and inside but it worked very well.

We switched alternately back and forth with the same 8 people until 11:30. That was fun and even though we all layered up against the cool morning temps, we had all de-layered to t-shirts by the time we left. We were back home for half an hour and a change of clothes. Bill drove around picking K, K & K up. We had a date with Lin’s Chinese Buffet for 1 o’clock. Keith had never been, so for the price, we all had a great lunch.

Always too much food but no complaining because it will tide us over until morning. Maybe a little snack later, we’ll see. We stopped at Harbor Freight for Bill to pick up a furniture blanket (cheap) to wrap the tail gate in. We need to get it home. We have opted to have the work done on the truck by our reputable body shop back home in Hanover. If there should be any problems later, we want to be close by.

Kim and I wandered through the .99¢ store where not everything is ONLY .99¢. There are gimmicks everywhere, aren’t there? Returning to the park, we were all very zombie-like as we met for a Happy Hour on our ‘new’ site. It was probably one of the quietest H.H.’s we’ve ever had. Oreo was entertaining us with a rock she’d found, trying to get Dad’s attention to throw it. Something to chase. As Keith says, she is ball crazy. So much so that you don’t say the word in her presence. 😊


When everyone left, we came inside and I had to start writing today’s post. I didn’t do too badly eating my 2 plates of food today with my tooth, choosing mostly soft foods. The seafood casserole was just as good as ever and I even had a piece of cherry banana for my buddy, Pat. They are good but not my favourite so I stuck to soft fruit, tapioca pudding and Jell-o. There won’t be any supper tonight, so this blog will be finished early.

It was a great day and we are looking forward to another venture out in the morning. I’ll call Dr. Eva’s office in the morning. Bill finished the Baldacci book and moved on to James Patterson's Cross Country. I need to update my list of what we've read.

Thank you for stopping in for a visit. Your comments are always welcome.
Posted by Patsy Irene (Chillin' with Patsy) at 6:33 PM